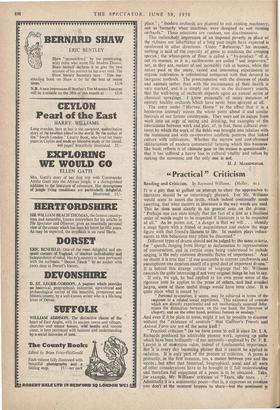 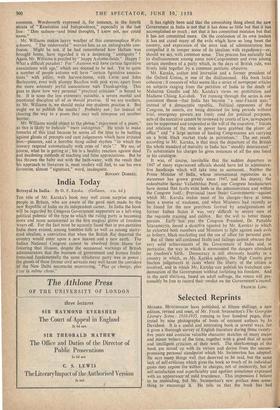 Reading and Criticism. By Raymond Williams. (Muller. 6s.) IT is a pity that so gallant an attempt to dear the approaches to literature should be so uninvitingly phrased. For Mr. Williams would seem to assert the truth, which indeed continually needs asserting, that what matters in literature is the way words are used. This he does most clearly in his general note on the drama: "Perhaps one can state simply that the fact of a text as a finalised order of words ought to be respected if literature is to be respected at all." As he points out, " a danger is that we will . . . identify a stage figure with a friend or acquaintance and endow the stage figure with that friend's likeness to life. In modern plays induce- ments to this behaviour may often be discerned."

Different types of drama should not be judged by the same criteria, for " speech, ranging from liturgy to declamation to representation of conversation, and in certain cases being understood to include singing, is the only common dramatic 'factor of importance." And no doubt it is true that " if one succumbs to current catchwords and assumptions one deprives onself of a great deal of important drama." It is behind this strange curtain of language that Mr. Williams conceals the quite interesting if not very original things he has to say.

If only, we sigh, he had applied to his own prose some of the rigorous tests he applies to the prose of others, and had avoided jargon, some of these useful things would have been clear. It is quite plain what is meant by: Personal re-creation, it seems, may be achieved in terms of the response to a related social experience. This existence of cont(ois which are directly experiential and not mechanically assumed deter- mines the distinction between, on the one hand, the literature of allegory, and on the other hand, political fantasy or analogy."

And even if it be plain to some, might it not be possible to discover ' without the " existence of controls " that Gulliver's Travels and Animal Farm are not of the' same kintl ?

" Practical criticism " (as we have come to call it since Dr. I. A. Richards produced his admirable pioneer work, opening up paths which have been brilliantly—if too narrowly—explored by Dr. F. R. Leavis) is of enormous value, indeed of fundamental importance. But it is every day becoming plainer that it cannot be applied in isolation. It is only part of the process of criticism. A poem is primarily, in the first instance, yes, a matter between you and the words ; but after that historical, biographical, aural and all sorts of other considerations have to be brought in if full understanding and therefore full enjoyment of a poem is to be obtained. Take. for example, Mr. Williams' criticism of " Tears, idle tears. . . .'"" ,Admittedly it is a sentimental poem—that is, it expresses an emotion you don't at the moment happen to share—but the sentiment is common. Wordsworth expressed it, for instance, in the fourth stanza of "Resolution and Independence," especially in the last line: "Dim sadness—and blind thoughts, I knew not, nor could name."

Mr. Williams makes heavy weather of this commonplace Welt- schmerz. "The underworld " worries him as an unforgivable con- fusion. Might he not, if he had remembered how Hallam was brought home, have regarded it as a deepening " ambiguity " ? Again, Mr. Williams is puzzled by " happy Autumn-fields." Happy ? What a difficult paradox! For " Autumn will have certain figurative associations with age," which are deemed to be sad. Yet to quite a number of people autumn will have " certain figurative associa- tions " with jollity, with harvest-home, with Ceres and John Barleycorn, even with plumpy Bacchus with pink eyne, apart from the more solemnly joyful associations with Thanksgiving. This goes to show how very personal "practical criticism" is bound to be. It is none the less extremely valuable, a severe mental and ;emotional discipline all of us should practise. If we are teachers, as Mr. Williams is, we should make our students practise it. But ought we to publish the results ? Probably not ; for instead of clearing the way to a poem they may well interpose yet another barrier.

Mr. Williams would object to the phrase " enjoyment of a poem,"

Rs this is likely to indicate " mere indulgence." He tends to make emarks of this kind because he seems all the time to be battling lagainst ghosts of precepts and cant judgements which have irritated him—pleasure, and a horrible thing called rhythm " to which the 'Unwary respond automatically with cries of ' style '." We see, of ourse, what he is getting at ; his is a healthy reaction against dead nd deadening methods of teaching and false appreciations. But he as thrown the baby out with the bath-water, with the result that his approach to literature is, most readers will feel, to use his own favourite, almost " signature," word, inadequate.