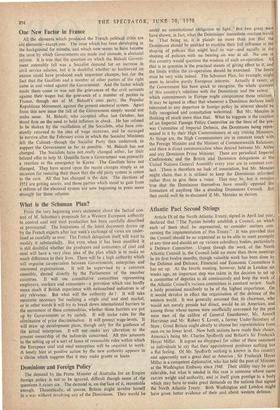 Article IX of the North Atlantic Treaty, signed in April last year, declared that "The Parties hereby establish a Council, on which each of them shall be represented, to consider matters con- cerning the implementation of this Treaty." It was provided that the Council should be so organised as to be able to meet promptly at any time and should set up various subsidiary bodies, particularly a Defence Committee. Urgent though the work of the North Atlantic Council is, the Council held no more than three meetings in its first twelve months, though valuable work has been done by the Defence and Defence, Financial and Economic Committees it has set up. At the fourth meeting, however, held in London six weeks ago, an important step was taken in the decision to set up a committee of deputies to sit continuously and keep the work of the Atlantic Council's various committees in constant review. Such a body promised manifestly to be of the highest importance. On it would devolve in effect the organisation of the defence of the western world. It was generally assumed that its chairman, who would not merely preside but direct, would be an American, and among those whose names were unofficially canvassed for the post were men of the calibre of General Eisenhower, Mr. Averell Harriman and Mr. Robert S. Lovett, a former Under-Secretary of State ; Great Britain ought clearly to choose her representative from men on no lower level. Now both nations have made their choice, America's being Mr. Charles Spofforth and Britain's Sir Frederick Hoyer Millar. It argues no disrespect for either of these nominees as individuals to say that their appointment produces nothing but a flat feeling. Of Mr. Spofforth nothing is known in this country and apparently not a great deal in America ; Sir Frederick Hoyer Millar is a competent diplomatist, who has held the post of Minister at the Washington Embassy since 1948. Their ability may be con- siderable, but what is needed in this case is someone whose name carries weight and .authority, and in itself gives prestige to a body which may have to make great demands on the nations that signed the North Atlantic Treaty.' Both Washington and London might have given better evidence of their zeal about western defence.