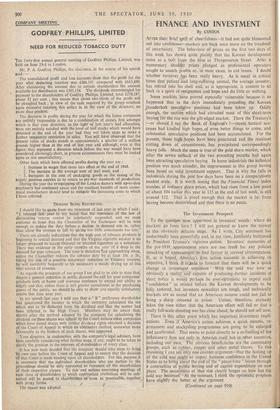 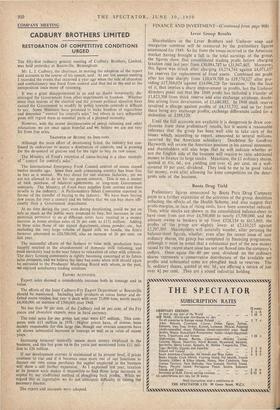 AFTER their brief spell of cheerfulness—it had not quite blossomed out into confidence—markets are back once more on the treadmill of uncertainty. The behaviour of prices on the first two days of this week has shown quite plainly that the Korean development came as a bolt from the blue in Throgmorton Street. After a momentary shudder prices plunged as professional operators sought to snatch profits or, in most cases, to cut losses. I doubt whether turnover hp.s been really heavy. As is usual in critical times that patient and long-suffering animal, the average investor, has retired into his shell and, as is appropriate, is content to sit back in a spirit of resignation and hope and do little or nothing.

Some markets have proved especially • vulnerable because it so happened that in the days immediately preceding the Korean ,,thunderbolt speculative positions had been taken up. Oddly enough, the section which had attracted most of this short-term buying for the rise was the gilt-edged market. There the Treasury's —or should I say the Bank of England's ?—recent tactical suc- cesses had kindled high hopes of even better things to come, and substantial speculative positions had been accumulated. For the present, those high hopes have been punctured and the resultant cutting down of commitments has precipitated correspondingly heavy falls. Much the same is true of the gold share market, which after the severe setback of the two preceding months had again been attracting speculative buying. In home industrials the technical position was much sounder, the improvement in this group having been based on solid investment support. That is Why the falls in industrials during the past few days have been on a comparatively modest scale. It is worth noting that the Financial Times' index number, of ordinary share prices, which had risen from a low point of about 104 earlier this year to 115 at the end of last week, is still around 112. That is proof enough that the market is far from having become demoralised and that there is no panic.

To the question now uppermost in investors' minds: where do markets go from here ? I will not pretend to know the answer at this obviously delicate stage. As I write, City sentiment has undoubtedly been powerfully and, in my view, justifiably buttressed by President Truman's vigorous %action. Investors' memories of the pre-1939, appeasement years are too fresh for any policies smacking of appeasement to find favour in current circumstances. If, as is hoped, America's firm action succeeds in achieving its objective, I think it is,,safe to forecast that there will be a quick change in investment sentinlient With the cold war now so obviously a reality_ and capable of producing .further incidents at short notice it would perhaps be over-optimistic to expect such " confidence " as existed before the Korean developments to be fully restored, but investors nowadays are tough, and technically markets are so sound that an American success could not fail to bring a sharp rebound in prices. Unless, therefore, anybody takes the view either that the American effort will fail or that a really full-scale shooting war lies close ahead, he should not sell now.

There is this other point which has important investment impli- cations. Even if America's action achieves a quick success, re- armament and stockpiling programmes are going to be enlarged and accelerated. That seems to point directly to a re-fuelling of the inflationary fires not only in America itself but in other countries, including our own. The obvious beneficiaries are the commodity groups, such as rubber, copper and other metal shares. To this reasoning I can see only one counter-argument--that the hotting up of the cold war might so impair business confidence in the United States as to bring about the end of the " peace-time " boom through a contraction of public buying and of capital expenditure on new plant. The seriousness of that risk clearly hinges on how hot the cold war becomes. At the moment, I think the optimistic prophets have slightly the better of the argument.

FINANCE AND INVESTMENT—(Continued from page 908) Lever Group Results Shareholders in the Lever Brothers and Unilever soap and margarine combine will be reassured by the preliminary figures announced for 1949. So far from the losses incurred in the American market having brought a' fall in the total earnings of the group, the figures show that consolidated trading profit before charging taxation rose last year from £30,094,787 to £31,947,465. Moreover this figure was struck after charging £4,274,744 against £4,071,451 for reserves for replacement of fixed assets. Combined net profit after tax rose sharply from £10,458,709 to £19,570,127 after pro- viding £17,569,024 against £14,096,226 for taxation. On the face of it, that implies a sharp improvement in profits, but the Unilever directors point out that the 1949 profit has included a transfer of £1,823,308 from stock reserve and also exchange surpluses, doubt• less arising from devaluation, of £5,680,882. In 1948 stock reserve involved a charge against profits of £4,135,732, and so far from there being any exchange profits, exchange differences called for a deduction of £389,120.

Until the full accounts are available it is dangerous to draw con- clusions from these preliminary results, but it seems a reasonable inference that the group has been well able to take care of the losses which, according to report, amounted to several millions,

incurred by the American subsidiary Doubtless Sir Geoffrey Heyworth will review the American position in his annual statement, and shareholders will also hope that he will indicate whether or not the English side of the business will require to raise additional money to finance its large stocks. Meantime, the £1 ordinary shares, quoted at 41s. 6d., are yielding just over 44, per cent. on a well- covered 10 per cent, dividend. They look to me to be good value for money, even after allowing for keen competition on the deter- gents side of the business.

Preliminary figures announced by Boots Pure Drug Company point to a further expansion of the activities of the group, doubtless reflecting the effects of the Health Scheme, and also suggest that profit-margins, in face of rising costs, have been somewhat reduced. Thus, while stocks are shown in the consolidated balance-sheet to have risen from just over £4,500,000 to nearly £5,500,000, and the amount owing to bankers is up from £528,134 to £613,869, the profits of the group are slightly lower at £2,110,215 against £2,297,369. Shareholders will naturally wonder, after perusing the balance-sheet figures, whether, even after the recent issue of new ordinary shares, the group has completed its financing programme, although it must be noted that a substantial part of the new money raised by the recent share issue has not yet flowed into the company's coffers. Once again the 40 per -cent. dividend on the ordinary shares represents a conservative distribution of the available net profits and substantial sums are ploughed back to reserves. The 5s. ordinary shares, qubted at 46s. 3d., are offering a return of just over 41 per cent. They are a sound industrial holding.