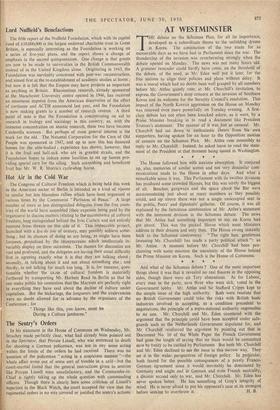 In his statement in the House of Commons on Wednesday, Mr. Strachey made perfectly clear, what had already been pointed out in the Spectator, that Private Linsell, who was sentenced to death for shooting a German policeman, was not In any sense acting within the limits of the orders he had received. There was no question of the policeman " acting in a suspicious manner "—the whole affair arose out of some sort of trouble in a caf—but the court-martial found that the general instructions given to sentries like Private Linsell were unsatisfactory, and the Commander-in- Chief is rightly taking up the whole question with commanding officers. Though there is clearly here some criticism of Linsell's superiors in the Black Watch, the court accepted the view that the r regimental orders in no way covered or justified the sentry's actions.