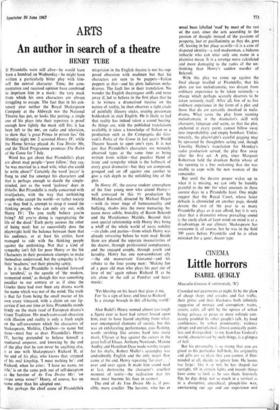 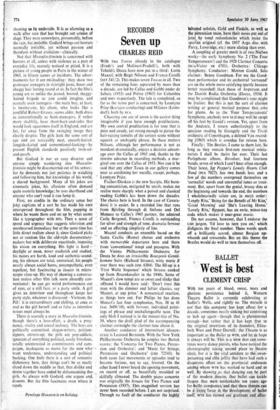 Masculin-fe►ninin (Continentale, 'X') Crowded wet pavements at night, lit by the glare of cheap shops and arcades and fast traffic, their glitter and their blackness both infinitely suggestive of menace and corruption; trains, streets, cafés, all split by the uproar of urban living; privacy or peace or mere solitude con- stantly prodded by other people's talk, by loud confidences, by urban promiscuity; violence abrupt and unexplained, almost comically point- less and disregarded: to me Jean-Luc Godard's world, characterised by such things, is a glimpse of hell.

'But his personality is so strong that you are glued to his particular hell-hole, his originality and gifts are so plain that you cannot, if film- minded at all, decide to ignore him. He looms too large: like it or not, he has shaped Our eyesight, till in certain lights and moods things have come to look as he sees them. Sinisterly flip, he digs deep, not so much in a vertical as in a disruptive, anarchical, plough-like way. overturning our age and our experience and

showing us its underside. It is as alarming as a walk after rain that has brought out armies of slugs. They were somewhere, presumably, before the; rain, but invisible;Goderd brings out horrors normally invisible, yet without passion and therefore without eroticism—clinically.

Not that Masculin-feminin is concerned with horrors at all, unless with violence as a part of everyday life, scarcely noticed or pitied. It is a picture of young people in Paris in the winter of 1965, in fifteen scenes or incidents. The adver- tisements for it are misleading: they show two grotesque teenagers in skintight jeans, boots and shaggy hair leering round at us. In fact the film's young are as unlike the jeaned, booted, shaggy- haired brigade as you could imagine, and scarcely, even teenagers—the main boy, at least, is twenty-one, his chum, who looks like a youthful Robert Graves, seems older, both dress as 'Conventionally as bank-managers, if rather more shabbily, have short-back-and-sides that would look squareness itself in England, and are far, far away from the swinging image they clearly despise. The girls look the same sort of age and are noticeably neat, smooth-haired, longish-skirted and conventional-dooking—by present English standards positively twin-set- and-pearls.

But Godard is not an easy director and anyone simply wandering into Masculin- ferninin might be disconcerted out of his senses: for he demands not' just patience in watching and following him, but knowledge of his world, a shared background. Many of his jokes are cinematic jokes, his allusions often demand quite esoteric knowledge; he uses shorthand and anyone who can't read it can lump it.

First, no credits in the ordinary sense but joky captions of a sort he has made his own interspersed throughout the film, popping in where be wants them and set up by what seems like a typographer with DTS. Then' a sense of speed and urgency that suggests television and unrehearsed immediacy but at the same time has little direct realism about it, since Godard picks not at random like the old-style documentary- makers but with deliberate exactitude, imposing his vision on everything. His light is hard= daylight or neon, never studioish and studied; his noises are harsh, loud and alithentic-sound. ing, his silences are total, unmusical, his people nearly always social bores, unsympathetic, even repellent, but festinating as insects in micro- scopic close-up. His way of showing a conversa- tion makes other film talk seem absurdly con- ventional: he can get weird performances out

of eyes, or a still face, or a party smile. A girl gives an interview and throughout keeps her party style, whatever is discussed—Vietnam, the Pill: it is extraordinary and chilling, at once as real as the girl herself and as false as interview noises must always be.

There is scarcely a story in Masculin-feminin, though there's a love-affair, a death, a preg- nancy, rivalry and sexual jealousy. The boys are politically committed, slogan-writers, petition- signers, stirrers-up; the girls are pop-addicts, ignorant of everything political, cosily frivolous, totally uninterested in commitments and cam- paigns, inadequate as mates for the men who, want tenderness, understanding and political backing. One feels there is a sort of romantic dichotomy here, that things can't be as neatly sliced down the middle as that, that dislike and desire together have ended by dehumanising then girls. As always with Godard, one argues and, dissents. But the film fascinates even where it repels.

Penelope Houston is on holiday.