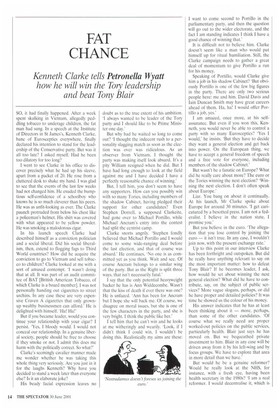 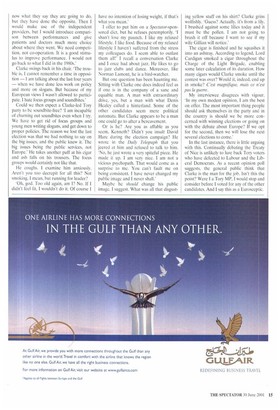 how he will win the Tory leadership and beat Tony Blair

SO, it had finally happened. After a week spent skulking in Vietnam, allegedly peddling tobacco to underage children, the fat man had sung. In a speech at the Institute of Directors in St James's, Kenneth Clarke, bane of Eurosceptics everywhere, finally declared his intention to stand for the leadership of the Conservative party. But was it all too late? I asked myself. Had he been too dilatory for too long?

I went to see Clarke in his office to discover precisely what he had up his sleeve, apart from a packet of 20. He rose from a cluttered desk to shake my hand. I was glad to see that the events of the last few weeks had not changed him. He exuded the bumptious self-confidence of a schoolboy who knows he is so much cleverer than his peers. He was as unfit-looking as ever. The Clarke paunch protruded from below his chest like a policeman's helmet. His shirt was covered with what appeared to be yellow powder. He was smoking a malodorous cigar.

In his launch speech Clarke had described himself as a conviction politician and a social liberal. Did his social liberalism, then, extend to flogging fags to Third World countries? How did he acquire the conviction to go to Vietnam and sell tobacco to children? Clarke looked at me with a sort of amused contempt. 'I wasn't doing that at all. It was part of an audit committee of BAT [British American Tobacco, of which Clarke is a board member]. I was not personally handing out cigarettes to street urchins. In any case these are very expensive Craven A cigarettes that only grownup wealthy businessmen can afford.' He is delighted with himself. 'Ha! Hal' But if you became leader, would you continue your relationship with your cigar? I persist. 'Yes, I bloody would. I would not conceal our relationship. In a genuine liberal society, people should be free to choose if they smoke or not. I admit this does me harm with the politically correct. So what?"

Clarke's seemingly cavalier manner made me wonder whether he was taking this whole thing very seriously. Are you just in it for the laughs Kenneth? Why have you decided to stand a week later than everyone else? Is it an elaborate joke?

His beady facial expression leaves no doubt as to the true extent of his ambition. 'I always wanted to be leader of the Tory party and I should like to be Prime Minister one day.'

But why had he waited so long to come out? 'I thought the indecent rush to a personality slagging match as soon as the election was over was ridiculous. As an observer from Vietnam, I thought the party was making itself look absurd. It's a pity William resigned when he did. But I have had long enough to look at the field against me and I have decided I have a perfectly reasonable chance of winning.

But. I tell him, you don't seem to have any supporters. How can you possibly win with so many Tories, including members of the shadow Cabinet, having pledged their support for other candidates? Even Stephen Dorrell, a supposed Clarkeite, had gone over to Michael Portillo, while Michael Ancram's entry into the contest had split the centrist camp.

Clarke snorts angrily. 'Stephen fondly believed that Michael Portillo and I would come to some wide-ranging deal before the last election, and that of course was absurd.' He continues, 'No one is as committed yet as you think. Wait and see. Of course Ancram belongs to a similar wing of the party. But as the Right is split three ways, that isn't necessarily fatal.'

I say that the only potential heavyweight backer he has is Ann Widdecombe. Wasn't that the kiss of death if ever there was one? He is unfazed. 'Ann has been for Ancram but I hope she will back me. Of course, we disagree on moral issues, but she is one of the few characters in the party, and she is very bright. I think the public like her.'

I tell him that he can't win and he looks at me witheringly and wearily. 'Look, if I didn't think I could win, I wouldn't be doing this. Realistically my aims are these: I want to come second to Portillo in the parliamentary party, and then the question will go out to the wider electorate, and the fact I am standing indicates I think I have a good chance of winning that.'

It is difficult not to believe him. Clarke doesn't seem like a man who would put himself up for ritual humiliation. Still, the Clarke campaign needs to gather a great deal of momentum to give Portillo a run for his money.

Speaking of Portillo, would Clarke give him a job in his shadow Cabinet? 'But obviously Portillo is one of the few big figures in the party. There are only two serious people here: me and him. David Davis and lain Duncan Smith may have great careers ahead of them. Ha, ha! I would offer Portillo a job, yes.'

I am amazed, once more, at his selfassurance. But even if you won this, Kenneth, you would never be able to control a party with so many Eurosceptics? 'Yes I would,' he insists. 'But they have to decide they want a general election and get back into power. On the European thing, we have to accept a general freedom of speech and a free vote for everyone, including members of the shadow Cabinet.'

Liar. You bang on about it continually. At his launch, Mr Clarke spoke about Europe for around 30 minutes. 'I get caricatured by a besotted press. I am not a federalist. I believe in the nation state, I promise you.'

But you believe in the euro. 'The allegation that you lose control by joining the euro — it isn't true. In any case, I wouldn't join now, with the present exchange rate.'

Up to this point in our interview Clarke has been forthright and outspoken. But did he really have anything relevant to say on the most important matter: how to defeat Tony Blair? If he becomes leader, I ask, how would he set about winning the next general election? What did he have to contribute, say, on the subject of public services? More vague slogans, perhaps, or did he have proper and detailed policies? It was time he showed us the colour of his money.

His answer indicates that he has at least been thinking about it — more, perhaps, than some of the other candidates. 'Of course what we really need are proper worked-out policies on the public services, particularly health. Blair just says he has moved on. But we bequeathed private investment to him. Blair in any case will be driven away from it by his left-wing and by focus groups. We have to explore that area in more detail than we have.'

But would he be a genuine reformer? Would he really look at the NHS, for instance, with a fresh eye, having been health secretary in the 1980s? 'I am a real reformer. I would decentralise it, which is

now what they say they are going to do, but they have done the opposite. Then I would make use of the independent providers, but I would introduce comparison between performances and give patients and doctors much more choice about where they went. We need competition, not co-operation. It is a good stimulus to improve performance. I would not go hack to what I did in the 1980s.'

Clarke swings back in his chair. 'The trouble is, I cannot remember a time in opposition — I am talking about the last four years — when we have done less work on policy and more on slogans. But because of my European views I wasn't allowed to participate. I hate focus groups and soundbites.'

Could we then expect a Clarke-led Tory party to be soundbite-free? 'I am incapable of churning out soundbites even when I try. We have to get rid of focus groups and young men writing slogans, and get down to proper policies. The reason we lost the last election was that we had nothing to say on the big issues, and the public knew it. The big issues being the public services, not Europe.' He takes another puff at his cigar and ash falls on his trousers. The focus groups would certainly not like that.

He coughs. I examine him anxiously. Aren't you too decrepit for all this? Not smoking, I mean, but running for leader?

'Oh, god. Too old again, am I? No. If I didn't feel fit, I wouldn't do it. Of course I have no intention of losing weight, if that's what you mean.'

I offer to put him on a Spectator-sponsored diet, but he refuses peremptorily. 'I shan't lose my paunch. I like my relaxed lifestyle. I like food. Because of my relaxed lifestyle I haven't suffered from the stress my colleagues do. I seem able to outlast them ail' I recall a conversation Clarke and I once had about jazz. He likes to go to jazz clubs and dance. Moreover, like Norman Lamont, he is a bird-watcher.

But one question has been haunting me. Sitting with Clarke one does indeed feel as if one is in the company of a sane and equable man. A man with extraordinary drive, yes, but a man with what Denis Healey called a hinterland. Some of the other candidates seem mere political automata. But Clarke appears to be a man one could go to after a bereavement.

Or is he? Are you as affable as you seem, Kenneth? Didn't you insult David Hare during the election campaign? He wrote in the Daily Telegraph that you jeered at him and refused to talk to him. 'No, he just wrote a very spiteful piece. He made it up. I am very nice. I am not a vicious psychopath. That would come as a surprise to me. You can't fault me on being consistent. I have never changed my public image and I never shall.'

Maybe he should change his public image, I suggest. What was all that disgust ing yellow stuff on his shirt? Clarke grins wolfishly. 'Guess? Actually, it's from a lily. I brushed against some lilies today and it must be the pollen. I am not going to brush it off because I want to see if my wife Gillian will notice.'

The cigar is finished and he squashes it into an ashtray. According to legend, Lord Cardigan smoked a cigar throughout the Charge of the Light Brigade, enabling some later calculation of its duration. How many cigars would Clarke smoke until the contest was over? Would it, indeed, end up in smoke? C'est magnyique, mats cc n'est PUS la guerre.

My interviewee disagrees with vigour. 'In my own modest opinion, I am the best on offer. The most important thing people should ask themselves in the party and in the country is should we be more concerned with winning elections or going on with the debate about Europe? If we opt for the second, then we will lose the next several elections to come.'

In the last instance, there is little arguing with this. Continually debating the Treaty of Nice is unlikely to lure back Tory voters who have defected to Labour and the Liberal Democrats. As a recent opinion poll suggests, the general public think that Clarke is the man for the job. Isn't this the point? Were I a Tory MP, I would stop and consider before I voted for any of the other candidates. And I say this as a Eurosceptic.