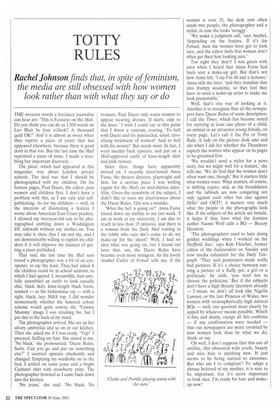 Rachel Johnson finds that, in spite of feminism,

THE sweetest words a freelance journalist can hear are: 'This is Features on the Mail. Do you think you can do us 1,500 words on Leo Blair by four o'clock? A thousand quid OK?' And it is almost as sweet when they reprint a piece of yours that has appeared elsewhere, because there is good dash in that too. But the last time the Mail reprinted a piece of mine, I made a troubling but important discovery.

The piece, which had appeared in this magazine, was about London private schools. The deal was that I should be photographed with my children. On his feature pages, Paul Dacre, the editor, puts women and children first. I don't have a problem with this. as I am vain and selfpublicising. As for my children — well, in the interests of illustrating a feature I wrote about American East Coast prudery, I allowed my two-year-old son to be photographed ambling down a Washington DC sidewalk without any clothes on. You may take it, then, that I am not shy, and I am demonstrably willing to exploit my children if it will improve my chances of getting a piece published.

That said, the last time the Mail sent round a photographer was a bit of an eyeopener, to say the least. They, had asked if the children could be in school uniform, to which I had agreed. I, meanwhile, had carefully assembled an outfit to look casually chic: black skirt, knee-length black boots, teamed — as the fashionistas say — with a tight, black, lacy M&S top. I did wonder momentarily whether the funereal colour scheme would quite convey the 'Yummy Mummy' image I was straining for, but I put this to the back of my mind.

The photographer arrived. She set up her silvery umbrellas and so on in our kitchen. Then she asked me if I was ready. `Yup!' I preened, fluffing my hair. She stared at me. 'No black,' she pronounced. `Dacre Rules. Sorry. Can you go and put on something else?' I scurried upstairs obediently and changed. Emptying my wardrobe on to the bed, I settled on some jeans and a bright Cacharel shirt with strawberry print. The photographer frowned as I came back down into the kitchen.

'No jeans,' she said. 'No black. No trousers. Paul Dacre only wants women to appear wearing dresses. If skirts, only to the knee.' I wish I could say at this point that I threw a tantrum, roaring, 'To hell with Dacre and his patriarchal, sexist, trivialising treatment of women! And to hell with his money!' But needs must. In fact, I went meekly back upstairs, and put on a Mail-approved outfit of knee-length skirt and pink twinset.

Since then, things have apparently moved on. I recently interviewed Anna Furse, the theatre director, playwright and don, for a serious piece I was writing (again for the Mail) on mid-thirties infertility. Given the sensitivity of the subject, I didn't like to warn my interviewees about the Dacre Rules. This was a mistake.

'What the hell is going on?' Anna Furse hissed down my mobile to me last week. 'I am at work at my university. I am due to teach in less than 15 minutes, and there is a woman from the Daily Mail waiting in the lobby who says she's come to do my make-up for the shoot!' Well, I had no idea what was going on, but I found out later that, urn, the Dacre Rules have become even more stringent. As the lovely Anabel Cutler of Femail tells me, if the woman is over 35, the desk now often sends two people, the photographer and a stylist, in case she looks 'scraggy'.

'We make a judgment call,' says Anabel, 'depending on the feature. If it's for Femail, then the women have got to look nice, and the editor feels that women don't often get their hair looking nice.'

Too right they don't! I was green with envy when I heard that Anna Furse had been sent a make-up girl. But that's not how Anna felt. 'I say I'm 48 and a lecturer,' Anna tells me later, 'and they translate that into frumpy academic, so they feel they have to send a make-up artist to make me look presentable.'

Well, that's one way of looking at it. Another is to recognise that all the newspapers have Dacre Rules of some description. I call the Times, which has become noted for carrying at least one photo of a child, an animal or an attractive young female, on every page. Let's call it the Pet or Totty Rule. A lady on the picture desk urns and ahs when I ask her whether the Thunderer expects the women who appear on its pages to be groomed first.

'We wouldn't send a stylist for a news story, but we might well for a feature,' she tells me. 'We do find that the women don't often want one, though.' But it matters little what women want. What matters, of course, is shifting copies, and, as the broadsheets and the tabloids are now competing not only against each other but also against Hello! and OKTV, it matters very much what the people in the photographs look like. If the subjects of the article are female, it helps if they have what the feminist author Naomi Wolf calls a BQ — Beauty Quotient.

'The photographers used to hate doing golden weddings when I worked on the Sheffield Star,' says Kim Fletcher, former editor of the Independent on Sunday and now media columnist for the Daily Telegraph. 'They said pensioners made really bad pictures. If it's a choice between running a picture of a fluffy pet, a girl or a politician,' he adds, 'you tend not to choose the politician.' But if the subjects don't have a high Beauty Quotient already — I mean, we don't all look like Nigella Lawson, or the late Princess of Wales, two women with stratospherically high natural BQs — well, our quotient must clearly be upped by whatever means possible. Which is fine and dandy, except all this confirms — if any confirmation were needed — that our newspapers are more troubled by how women look than by what we do, think, or say.

Oh well, I don't suppose that this use of artifice, this obsession with youth, beauty and nice hair is anything new. It just seems to be being carried to extremes. But who am I to complain? To adapt a phrase beloved of my mother, it is nice to be important, but it's more important to look nice. I'm ready for hair and makeup now!