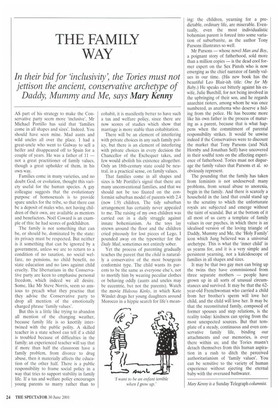 In their bid for `inclusivity, the Tories must not jettison the ancient, conservative archetype of

AS part of his strategy to make the Conservative party seem more 'inclusive', Mr Michael Portillo has said that 'families come in all shapes and sizes'. Indeed. You should have seen mine. Mad aunts and wild uncles all over the place. I had a great-uncle who went to Galway to sell a heifer and disappeared off to Spain for a couple of years. He was a father of 11 — not a great practitioner of family values, though a great upholder of them, in his own way.

Families come in many varieties, and no doubt God, or evolution, thought this variety useful for the human species. A gay colleague suggests that the evolutionary purpose of homosexuals is to provide spare uncles for the tribe, so that there can be a deposit of males who, not having children of their own, are available as mentors and benefactors. Noel Coward is an example of this: he had scores of godchildren.

The family is not something that can be, or should be, dominated by the state: its privacy must be respected. But neither is it something that can be ignored by a government, unless we are to return to a condition of no taxation, no social welfare, no pensions, no child benefit, no state education and no laws against child cruelty. The libertarians in the Conservative party are keen to emphasise personal freedom, which indeed we all desire. Some, like Mr Steve Norris, seem so anxious to preach what they practise that they advise the Conservative party to drop all mention of the emotionally charged phrase 'family values'.

But this is a little like trying to abandon all mention of the changing weather, because family life is so knottily intertwined with the public polity. A skilled teacher in a state school can tell if a child is troubled because of difficulties in the family: an experienced teacher will say that if more than half the classroom have a family problem, from divorce to drug abuse, then it materially affects the education of the other half. There is a public responsibility to frame social policy in a way that tries to support stability in family life. If a tax and welfare policy encourages young parents to marry rather than to cohabit, it is manifestly better to have such a tax and welfare policy, since there are now scores of studies which show that marriage is more stable than cohabitation.

That families come in all shapes and sizes is Mr Portillo's signal that there are many unconventional families, and that we should not be too fixated on the conformist suburban model of parents with 2.4 (now 1.9) children. The tidy suburban arrangement has certainly never appealed to me. The raising of my own children was carried out in a daily struggle against innate bohemianism. As the toys lay strewn around the floor and the children cried piteously for lost pieces of Lego, I pounded away on the typewriter for the Daily Mail, sometimes not entirely sober.

Yet the process of parenting gradually teaches the parent that the child is naturally a conservative of the most bourgeois conformist type. The child wants its parents to be the same as everyone else's, not to mortify him by wearing peculiar clothes or behaving oddly (aunts and uncles may be eccentric, but not the parents). Watch the movie Hideous Kinky, in which Kate Winslet drags her young daughters around Morocco in a hippie search for life's mean ing: the children, yearning for a predictable, ordinary life, are miserable. Eventually, even the most individualistic bohemian parent is forced into some variation of suburbanite, as the author Tony Parsons illustrates so well.

Mr Parsons — whose novel Man and Boy, a poignant story of fatherhood, sold more than a million copies — is the dead cool former expert on the Sex Pistols who is now emerging as the chief narrator of family values in our time. (His new book has the beautiful Leo Blair-ish title: One for My Baby.) He speaks out bitterly against his exwife, Julie Burchill, for not being involved in the upbringing of their son, and he regards anarchist rioters, among whom he was once numbered, as anathema who deserve a hiding from the police. He has become more like his own father in the process of maturing as a parent, because that is what happens when the commitment of parental responsibility strikes. It would be unwise indeed if the Conservatives were to discount the market that Tony Parsons (and Nick Hornby and Jonathan Self) have uncovered in their soulful texts on the affecting experience of fatherhood. Tories must not disparage the family values that Parsons et al. so obviously represent.

The pounding that the family has taken from feminists is not undeserved: many problems, from sexual abuse to anorexia, begin in the family. And there is scarcely a household in the land that could stand up to the scrutiny to which the unfortunate royals are subjected and emerge without the taint of scandal. But at the bottom of it all most of us carry a template of family values in our psyches, in which there is an idealised version of the loving triangle of Daddy, Mummy and Me, the 'Holy Family' icon which Jung believed was a universal archetype. This is what the 'inner child' in us yearns for, and it is a very simple and persistent yearning, not a kaleidoscope of families in all shapes and sizes.

It may be that two gay men can bring up the twins they have commissioned from three separate mothers — people have grown up in all sorts of unusual circumstances and survived. It may be that the 62year-old Frenchwoman who carried a child from her brother's sperm will love her child, and the child will love her. It may be that the reconstituted family, composed of former spouses and step relations, is the reality today: kindness can spring from the most unexpected sources. But that template of a steady, continuous and even conservative family life, binding our attachments and our memories, is ever there within us; and the Tories mustn't detach themselves from this human aspiration in a rush to ditch the perceived authoritarianism of 'family values'. You can be sensitive to the variety of human experience without ejecting the eternal baby with the overused bathwater.