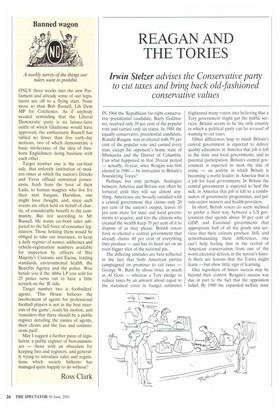 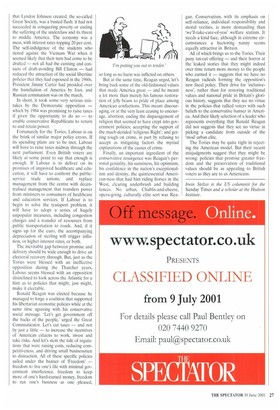 REAGAN AND THE TORIES

to cut taxes and bring back old-fashioned conservative values

Perhaps, but only perhaps. Analogies between America and Britain can often be tortured until they will say almost anything. Americans are broadly satisfied with a central government that claims only 20 per cent of the nation's output, leaves 10 per cent more for state and local governments to acquire, and lets the citizens who created the wealth keep 70 per cent of it to dispose of as they please. British voters have re-elected a central government that already claims 40 per cent of everything they produce — and has its heart set on an even bigger slice of the national pie.

The differing attitudes are best reflected in the fact that both American parties campaigned on promises to cut taxes — George W. Bush by about twice as much as Al Gore — whereas a Tory pledge to reduce taxes by an amount about equal to the statistical error in budget estimates frightened many voters into believing that a Tory government might gut the public services. Britain seems to be the only country in which a political party can be accused of wanting to cut taxes.

In short, British voters do seem inclined to prefer a third way, between a US government that spends about 30 per cent of GDP, and Euroland governments that appropriate half of all the goods and services that their citizens produce. Still, and notwithstanding these differences, one can't help feeling that in the revival of American conservatism from one of the worst electoral defeats in the nation's history there are lessons that the Tories might learn — but show little sign of learning.

One ingredient of future success may be beyond their control. Reagan's success was due in part to the fact that the opposition failed. By 1980 the expanded welfare state that Lyndon Johnson created, the so-called Great Society, was a busted flush: it had not succeeded in conquering poverty or ending the suffering of the underclass and its threat to middle America. The economy was a mess, with interest rates topping 20 per cent. The self-indulgence of the students who rioted against the Vietnam War when it seemed likely that their turn had come to be drafted — not all had the cunning and contacts of draft-avoiding Bill Clinton — had reduced the attraction of the social libertine policies that they had espoused in the 1960s. President Jimmy Carter had presided over the humiliation of America by Iran, and Russian communism was on the march.

In short, it took some very serious mistakes by the Democratic opposition — which by 1984 was promising to raise taxes if given the opportunity to do so — to enable conservative Republicans to return to and retain power.

Fortunately for the Tories, Labour is on the brink of similar major policy errors. If its spending plans are to be met, Labour will have to raise taxes midway through the next parliament. Even British voters are likely at some point to say that enough is enough. If Labour is to deliver on its promises of improved healthcare and education, it will have to confront the publicservice trade unions, and replace management from the centre with decentralised management that transfers power from ministers to consumers of healthcare and education services. If Labour is to begin to solve the transport problem, it will have to adopt a series of hugely unpopular measures, including congestion charges and a transfer of resources from public transportation to roads. And, if it signs up for the aim, the accompanying depreciation of sterling will trigger inflation, or higher interest rates, or both.

The inevitable gap between promise and delivery should be wide enough to drive an electoral recovery through. But, just as the Tories were blessed with an ineffective opposition during the Thatcher years, Labour seems blessed with an opposition disinclined to look across the Atlantic for a hint as to policies that might, just might, make it electable.

Ronald Reagan was elected because he managed to forge a coalition that supported his libertarian economic policies while at the same time agreeing with his conservative social message. 'Let's get government off the backs of the people,' urged the Great Communicator. Let's cut taxes — and not by just a little — to increase the incentives of American citizens to work, invest and take risks. And let's stem the tide of regulations that were raising costs, reducing competitiveness, and driving small businessmen to distraction. All of these specific policies sailed under the banner of 'Freedom' — freedom to live one's life with minimal government interference, freedom to keep more of one's hard-earned money, freedom to run one's business as one pleased, so long as no harm was inflicted on others.

But at the same time, Reagan urged, let's bring back some of the old-fashioned values that made America great — and he meant a lot more than merely his famous restoration of jelly beans to pride of place among American confections. This meant discouraging, or at the very least ceasing to encourage, abortion; ending the disparagement of religion that seemed to have crept into government policies; accepting the support of the much-derided 'religious Right'; and getting tough on crime, in part by refusing to accept as mitigating factors the myriad explanations of the causes of crime.

Finally, an important ingredient of the conservative resurgence was Reagan's personal geniality, his sunniness, his optimism, his confidence in the nation's exceptionalism and destiny, the quintessential American-ness that had him riding horses in the West, clearing underbrush and building fences. No urban, Chablis-and-cheese, opera-going, culturally elite sort was Rea

gan. Conservatism, with its emphasis on self-reliance, individual responsibility and moral verities, is more demanding than 'we'll-take-care-of-you' welfare statism. It needs a kind face, although in extreme circumstances a hectoring nanny seems equally attractive in Britain.

All of which brings us to the Tories. Their puny tax-cut offering — and their horror at the leaked stories that they might indeed over time return more money to the people who earned it — suggests that we have no Reagan radicals forming the opposition's new fiscal policy. Their drive for 'inclusiveness', rather than for restoring traditional values and national pride in Britain's glorious history, suggests that they see no virtue in the policies that rallied voters with such beliefs to the conservative banner in America. And their likely selection of a leader who represents everything that Ronald Reagan did not suggests that they see no virtue in picking a candidate from outside of the 'mod' urban elite.

The Tories may be quite right in rejecting the American model. But their recent misjudgments suggest that they might be wrong: policies that promise greater freedom and the preservation of traditional values should be as appealing to British voters as they are to us Americans.

Irwin Stelzer is the US columnist for the Sunday Times and a scholar at the Hudson Institute.