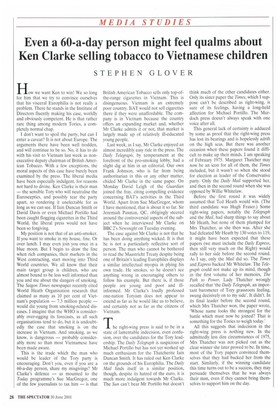 How we want Ken to winl We so long for him that we try to convince ourselves that his visceral Europhilia is not really a problem. There he stands in the Institute of Directors fluently making his case, worldly and obviously competent. He is that rather rare thing among modern Tories, a completely normal chap.

I don't want to spoil the party, but can I enter a caveat? It is not about Europe. The arguments there have been well trodden, and will continue to be so. No, it has to do with his visit to Vietnam last week as nonexecutive deputy chairman of British American Tobacco. With a few exceptions, the moral aspects of this case have barely been examined by the press. The liberal media have been especially indulgent, for reasons not hard to divine. Ken Clarke is their man — the sensible Tory who will neutralise the Eurosceptics, and possibly tear the party apart, so rendering it unelectable for as long as we can see. If lain Duncan Smith or David Davis or even Michael Portillo had been caught flogging cigarettes in the Third World, the liberal press would not have been so forgiving.

My position is not that of an anti-smoker. If you want to smoke in my house, fine. Or over lunch. I may even join you once in a blue moon. But I begin to draw the line when rich companies, their markets in the West contracting, start moving into Third World countries. We all know that their main target group is children, who are almost bound to be less well informed than you and me about the dangers of smoking. The Saigon Times newspaper recently cited World Heath Organisation research that claimed as many as 10 per cent of Vietnam's population — 7.3 million people — would die young from smoking-related diseases. I imagine that the WHO is considerably over-egging its forecasts, as all such organisations tend to do, but it is undoubtedly the case that smoking is on the increase in Vietnam. And smoking, as we know, is dangerous — probably considerably more so than most Vietnamese have been made aware.

This is the trade which the man who would be leader of the Tory party is encouraging. Don't you, even if you are a 60-a-day person, share my misgivings? Mr Clarke's defence — as mounted to the Today programme's Sue MacGregor, one of the few journalists to tax him — is that British American Tobacco sells only top-ofthe-range cigarettes in Vietnam. This is disingenuous. Vietnam is an extremely poor country. BAT would not sell cigarettes there if they were unaffordable. The company is in Vietnam because the country offers an expanding market and, whether Mr Clarke admits it or not, that market is largely made up of relatively ill-educated young people.

Last week, as I say, Mr Clarke enjoyed an almost incredibly easy ride in the press. The Daily Telegraph, by temperament at the forefront of the pro-smoking lobby, had a slight dig at him in an editorial. Our own Frank Johnson, who is far from being authoritarian in this or any other matter, chided Mr Clarke in the same paper. On Monday David Leigh of the Guardian joined the fray, citing compelling evidence concerning BAT's activities in the Third World. Apart from Sue MacGregor, whom I have mentioned, that is about it so far. Sir Jeremiah Paxrnan, QC, obligingly steered around the controversial aspects of the subject when he interviewed Mr Clarke on BBC 2's Newsnight on Tuesday evening.

The case against Mr Clarke is not that he has been doing anything wicked. It is that he is not a particularly reflective sort of person. The man who cannot be bothered to read the Maastricht Treaty despite being one of Britain's leading Europhiles displays a similar intellectual myopia in plying his own trade. He smokes, so he doesn't see anything wrong in encouraging others to follow his example. But there is, if those people are young and poor and illinformed. Mr Clarke's loudly professed one-nation Toryism does not appear to extend as far as he would like us to believe, and certainly not as far as the citizens of Vietnam.

The right-wing press is said to be in a state of lamentable indecision, even confusion, over the candidates for the Tory leadership. The Daily Telegraph is suspicious of Michael Portillo but has not yet worked up much enthusiasm for the Thatcherite lain Duncan Smith. It has ruled out Ken Clarke on the grounds of his Europhilia. The Daily Mail finds itself in a similar position, though, despite its hatred of the euro, it is much more indulgent towards Mr Clarke. The Sun can't bear Mr Portillo but doesn't

think much of the other candidates either. Only its sister paper the Times, which I suppose can't be described as right-wing, is sure of its feelings, having a long-held affection for Michael Portillo. The Murdoch press doesn't always speak with one voice after all.

This general lack of certainty is adduced by some as proof that the right-wing press has lost its bearings and is hopelessly adrift on the high seas. But there was another occasion when these papers found it difficult to make up their minds. I am speaking of February 1975. Margaret Thatcher may now be an icon for all of them, the Times included, but it wasn't so when she stood for election as leader of the Conservative party. Only the Daily Mail supported her, and then in the second round when she was opposed by Willie Whitelaw.

Before the first round it was widely assumed that Ted Heath would win. (The third candidate was Hugh Fraser.) Some right-wing papers, notably the Telegraph and the Mail, had sharp things to say about Mr Heath, but none of them plumped for Mrs Thatcher, as she then was. After she had defeated Mr Heath by 130 votes to 119, it might have been expected that these papers (we must include the Daily Express, then still very much on the Right) would rally to her side before the second round. As I say, only the Mail did so. The Times and Express backed Mr Whitelaw. The Telegraph could not make up its mind, though in the first volume of her memoirs, The Path to Power, Lady Thatcher wrongly recalled that 'the Daily Telegraph, an important barometer of Tory grassroots feeling, swung decisively on to my side'. It didn't. In its final leader before the second round, which Mrs Thatcher won, the paper wrote, 'Whose name looks the strongest for the battle which must now be joined? That is something for the Tories to weigh today.'

All this suggests that indecision in the right-wing press is nothing new. In the admittedly less dire circumstances of 1975, Mrs Thatcher was not picked out as the clear winner she later proved to be. In time, most of the Tory papers convinced themselves that they had backed her from the start. Similarly, if the winning candidate this time turns out to be a success, they may persuade themselves that he was always their man, even if they cannot bring themselves to support him on the day.