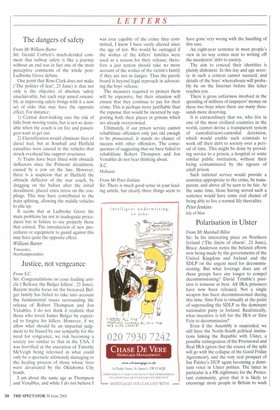 Sir: Congratulations on your leading article (`Release the Bulger killers', 23 June). Recent media focus on the bereaved Bulger family has failed to take into account the fundamental issues surrounding the release of Robert Thompson and Jon Venables. I do not think it realistic that those who loved James Bulger be expected to forgive his killers. However, if we allow what should be an impartial judgment to be biased by our sympathy for the need for vengeance, we risk becoming a society too similar to that in the USA. I was horrified at the execution of Timothy McVeigh being televised in what could only be a spectacle ultimately damaging to the healing process of those whose lives were devastated by the Oklahoma City bomb.

I am about the same age as Thompson and Venables, and while I do not believe I was ever capable of the crime they committed, I know I have vastly altered since the age of ten. We would be outraged if the wishes of the killers' families were used as a reason for their release; therefore a just system should take no more account of the wishes of the victim's family if they are not in danger. Thus the parole board is beyond legal reproach in advocating the boys' release.

The measures required to protect them will be expensive, but their situation will ensure that they continue to pay for their crime. This is perhaps more justifiable than the expense that would be incurred by supporting both their places in prisons which are already overcrowded.

Ultimately, if our prison service cannot rehabilitate offenders only just old enough to be prosecuted, it stands no chance of success with other offenders. The consequences of suggesting that we have failed to rehabilitate Robert Thompson and Jon Venables do not bear thinking about.

From Mr Peter Jenkins Sir: There is much good sense in your leading article, but clearly three things seem to have gone very wrong with the handling of this case.

An eight-year sentence in most people's view in no way comes near to writing off the murderers' debt to society.

The aim to conceal their identities is plainly dishonest. In this day and age secrecy in such a context cannot succeed, and details of the boys' whereabouts will probably be on the Internet before this letter reaches you.

There is gross unfairness involved in the spending of millions of taxpayers' money on these two boys when there are many thousands more deserving.

It is extraordinary that we, who live in one of the most civilised countries in the world, cannot devise a transparent system of custodial/semi-custodial detention, which would enable such criminals to work off their debt to society over a period of time. This might be done by providing service to a prison, a hospital or some similar public institution, without their being contaminated by the rigours of adult prison.

Such national service would provide a sentence appropriate to the crime, be transparent, and above all be seen to be fair. At the same time, those having served such a sentence would have some real chance of being able to live a normal life thereafter.