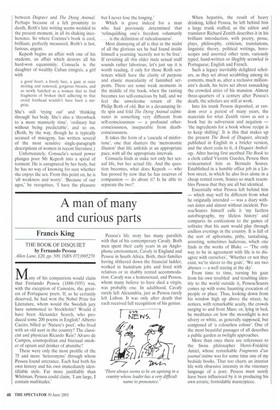 A man of many and curious parts

THE 1300K OF DISQUIET by Fernando Pessoa

Many of his compatriots would claim that Fernando Pessoa (1888-1935) was, with the exception of Camoens, the greatest of Portuguese poets. If, as he certainly deserved, he had won the Nobel Prize for Literature, whom would the Swedish jury have summoned to Stockholm? Would it have been Alexander Search, who produced some 200 poems in English? Alberto Caeiro, billed as `Nature's poet', who lived with an old aunt in the country? The classicist and physician Ricardo Reis? Alvaro de Campos, cosmopolitan and bisexual smoker of opium and drinker of absinthe?

These were only the most prolific of the 75 and more 'heteronyms' through whom Pessoa found utterance. Each had both his own history and his own immediately identifiable style. Far more justifiably than Whitman, Pessoa could claim, `I am large, I contain multitudes.' Pessoa's life story has many parallels with that of his contemporary Cavafy. Both men spent their early years in an Anglophone environment, Cavafy in England and Pessoa in South Africa. Both, their families having slithered down the financial ladder, worked in humdrum jobs and lived with relatives or in shabby rented accommodation. Cavafy was a homosexual, and Pessoa, whom many believe to have died a virgin, was probably one. In adulthood, Cavafy rarely left Alexandria, just as Pessoa rarely left Lisbon. It was only after death that each received full recognition of his genius. When hepatitis, the result of heavy drinking, killed Pessoa, he left behind him a large trunk stuffed, as the editor and translator Richard Zenith describes it in his brilliant introduction, with poetry, prose, plays, philosophy, criticism, translations, linguistic theory, political writings, horoscopes and assorted other texts, variously typed, hand-written or illegibly scrawled in Portuguese, English and French.

Such a legacy inevitably delighted scholars, as they set about scrabbling among its contents, much as, after a reclusive millionaire's death, his heirs set about ransacking the crowded attics of his mansion. Almost three-quarters of a century after Pessoa's death, the scholars are still at work.

Into his trunk Pessoa deposited, at random over a period of many years, the materials for what Zenith views as not a book but its subversion and negation — 'the ingredients for a book whose recipe is to keep shifting'. It is this that makes up the present The Book of Disquiet, already published in English in a briefer version, and the short coda to it, A Disquiet Anthology. After having first ascribed The Book to a clerk called Vicente Guedes, Pessoa then reincarnated him as Bernado Soares. Established in a humble office job in a Lisbon street, in which he also lives alone in a cheap rented room, Soares so much resembles Pessoa that they are all but identical.

Essentially what Pessoa left behind him — which may well be different from what he originally intended — was a diary without dates and almost without incident. Pessoa/Soares himself calls it 'my factless autobiography, my lifeless history' and compares its confessions to the games of solitaire that his aunt would play through endless evenings in the country. It is full of the sort of aphorisms, pithy, tantalising, arresting, sometimes ludicrous, which one finds in the works of Blake — 'The only way to be in agreement with life is to disagree with ourselves', 'Whether or not they exist, we're slaves to the gods', 'We are two abysses — a well staring at the sky'.

From time to time, turning his gaze from his own troubled and troubling identity to the world outside it, Pessoa/Soares comes up with some haunting evocation of people or place. Thus, looking down from his window high up above the street, he notices, with remarkable acuity, the crowds surging to and from Mass; or, lying in bed, he meditates on how the moonlight is not silvery or white, as generally supposed, but composed of 'a colourless colour'. One of the most beautiful passages of all describes a public garden as twilight approaches.

More than once there are references to the Swiss philosopher Henri-Frederic Amid, whose remarkable Fragments d'un journal intime was for some time one of my bedside books. That too charts an interior life with obsessive intensity in the visionary language of a poet. Pessoa must surely have been influenced by it in producing his own erratic, formidable masterpiece.