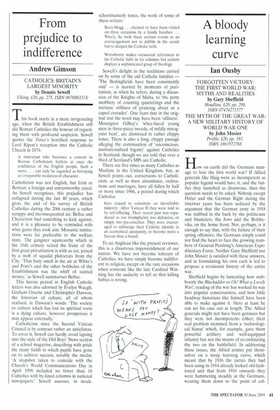 From prejudice to indifference

CATHOLICS: BRITAIN'S LARGEST MINORITY by Dennis Sewell Viking, £20, pp. 275, ISBN 067088331X This book starts in a more invigorating age, when the British Establishment still did Roman Catholics the honour of regarding them with profound suspicion. Sewell quotes the Times's horrified response to Lord Ripon's reception into the Catholic Church in 1874:

A statesman who becomes a convert to Roman Catholicism forfeits at once the confidence of the English people. Such a move . . . can only be regarded as betraying an irreparable weakness of character.

Catholicism was not English, but Irish or Roman: a foreign and untrustworthy creed. As Sewell recognises, this prejudice has collapsed during the last 40 years, which gives the end of his survey of British Catholics during the 20th century a rather scrappy and inconsequential air. Belloc and Chesterton had something to kick against, and it is a pleasure to be reminded with what gusto they took aim. Monastic institutions were far preferable to the welfare state. The gangster squirearchy which in the 16th century seized the fruits of the first great privatisation is with us yet, joined by a mob of squalid plutocrats from the City. 'That fusty smell in the air at White's and Pratt's and the other boltholes of the Establishment was the whiff of tainted money,' as Sewell summarises Belloc.

This heroic period in English Catholic letters was also adorned by Evelyn Waugh, Graham Greene and Christopher Dawson, the historian of culture, all of whom realised, in Dawson's words: 'The society or culture which has lost its spiritual roots is a dying culture, however prosperous it may appear externally.'

Catholicism since the Second Vatican Council is by contrast rather an anticlimax. To cover it. Sewell can hardly avoid lapsing into the style of the Old Boys' News section of a school magazine, describing with pride the many fields in which pupils have gone on to achieve success, notably the media: 'A snapshot taken to coincide with the Church's World Communications Day in April 1998 included no fewer than 16 Catholics with by-lined columns in national newspapers.' Sewell assesses, in mock

schoolmasterly tones, the work of some of these writers:

Rees-Mogg . . claimed to have been visited on three occasions by a family banshee . Wisely, he took these curious events as an encouragement not to dabble in the occult but to deepen his Catholic faith.

Worsthorne makes occasional references to his Catholic faith in his columns but seldom displays a sophisticated grasp of theology.

Sewell's delight in the traditions carried on by some of the old Catholic families 'The Bedingfields have been consistently odd' — is marred by moments of puritanism, as when he refers, during a discussion of the Knights of Malta, to 'the petty snobbery of counting quarterings and the intrinsic stillness of prancing about as a caped crusader'. One fears that in the original text the word may have been 'silliness'. Monsignor Gilbey's 'whey-faced young men in three-piece tweeds, of mildly misogynist bent', are dismissed in rather chippy tones. There is also a long, chippy passage alleging the continuation of 'unconscious, institutionalised bigotry' against Catholics in Scotland, though we are told that over a third of Scotland's MPs are Catholic.

There are five times as many Catholics as Muslims in the United Kingdom, but, as Sewell points out, conversions to Catholicism, as well as mass attendance, ordinations and marriages, have all fallen by half or more since 1966, a period during which Catholics

have ceased to constitute an identifiable minority. After Vatican II they were told to be self-effacing. Their recent past was repudiated as too triumphalist, too defensive, or simply too pre-conciliar. They were encouraged to submerge their Catholic identity in an ecumenical anonymity, to become more a flavour than a brand.

To an Anglican like the present reviewer, this is a disastrous impoverishment of our nation. We have not become tolerant of Catholics: we have simply become indifferent to religion, except on the rare occasions when someone like the late Cardinal Winning has the audacity to tell us that killing babies is wrong.