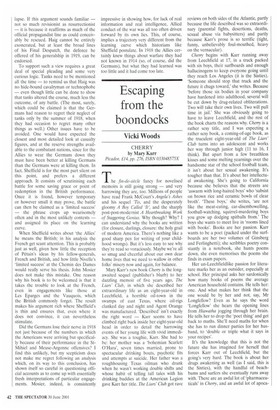 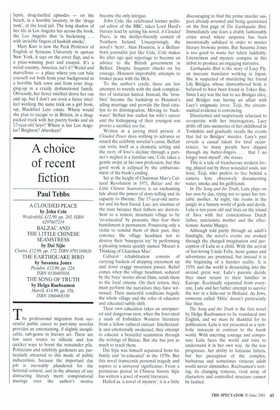 Escaping from the boondocks

The fin-dc-siècle fancy for novelised memoirs is still going strong — and very harrowing they are, too. Millions of people have read Frank McCourt's Angela's Ashes and his sequel 'Tis, and the desperately gloomy A Boy Called 'It', and the sharply post-post-modernist A Heartbreaking Work of Staggering Genius. Why though? Why? I can understand why the books are written (for closure, darlings, closure: the holy grail of modern America. There's nothing like a good sharp pen for writing of your childhood wrongs). But it's less easy to see why they're read so voraciously. Maybe we're all so smug and cheerful about our own dear home lives that we need to wallow in other folks' misery now and again, for balance.

Mary Karr's new book Cherry is the longawaited sequel (publisher's blurb) to her dazzling memoir of five years ago, The Liars' Club, in which she described her extraordinary life as an eight-year-old in Leechfield, a horrible oil-town in the swamps of east Texas, where oil-rigs clanked day and night and Agent Orange was manufactured. 'Described' isn't exactly the right word — Karr seems to have climbed right back inside her eight-year-old head in order to detail the harrowing events of her young life with vivid immediacy. She was a toughie, Karr. She had to be: her mother was a 'bohemian Scarlett O'Hara', seven times married, prone to spectacular drinking bouts, psychotic fits and attempts at suicide. Her father was a roughhousing Texas oilman who drank when he wasn't working double shifts and whose habit of telling tall tales with his drinking buddies at the American Legion gave Karr her title. The Liars' Club got rave reviews on both sides of the Atlantic, partly because the life described was so extraordinary (parental fights, desertions, deaths, sexual abuse via babysitters) and partly because Karr's prose is so terrific (tight, funny, unbelievably foul-mouthed, heavy on the vernacular).

Cherry begins with Karr running away from Leechfield at 17, in a truck packed with six boys, their surfboards and enough hallucinogens to keep everyone going until they reach Los Angeles (it is the Sixties). 'Someone should stop that truck and the future it chugs toward,' she writes. Because 'before those six bodies in your company have hardened into adulthood, several will be cut down by drug-related obliterations. Two will take their own lives. Two will pull time in jail.' She was obviously going to have to leave Leechfield, and the rest of the book charts the reasons why. Cherry is a rather sexy title, and I was expecting a rather sexy book, a coming-of-age book, as the truculent eight-year-old of The Liars' Club turns into an adolescent and works her way through junior high (11 to 16, I think). But apart from a few breathless kisses and some melting yearnings over the handsome star of the school football team, it isn't about her sexual awakening. It's tougher than that. It's about her intellectual awakening. She's going to California because she believes that the streets are `aswarrn with long-haired boys' who 'subsist on brown rice and ceramic bowls of clear broth'. 'These boys,' she writes, 'are not like the meat-eating, car-disembowelling, football-watching, squirrel-murdering boys you grew up dodging spitballs from.' The boys she wants to meet live in 'rooms lined with books'. Books are her passion. Karr wants to be a poet (packed under the surfboards are her two volumes of Ginsberg and Ferlinghetti); she scribbles poetry constantly in a notebook, she hunts poems down, she even memorises the poems she finds in exam papers.

Her un-Leechfieldlike passion for literature marks her as an outsider, especially at school. Her principal asks her sardonically how many books of poems the average American household contains. He tells her: one. And what makes her think that the one would be by her and not, say, Mr Longfellow? Even as he says the word 'Longfellow' she hears the opening lines from Hiawatha jogging through her brain. He tells her to drop the 'poet thing' and get back to maths. She'll need maths for when she has to run dinner parties for her husband, to 'double or triple what it says in your recipes'.

It's the knowledge that this is not the future she has imagined for herself that forces Karr out of Leechfield, but the going's very hard. The book is about her drugs awakening as well (as I said, this is the Sixties), with the handful of beachbums and surfers she eventually runs away with. There are an awful lot of 'pharmaceuticals' in Cherry, and an awful lot of apoca lyptic, drug-fuelled episodes — on the beach, in a horrible lavatory, in the 'drugs tank', at the local jail. The long shadow of her life in Los Angeles lies across the book, the Los Angeles that 'is beckoning . . . with invisible fingers of hashish smoke'.

Mary Karr is now the Peck Professor of English at Syracuse University in upstate New York, it says on the cover flap, and is a prize-winning poet and essayist. It's a weird country, America, isn't it? Weird and marvellous — a place where you can bale yourself out both from your background in a horrible hick town and from your dragging-up in a crazily dysfunctional family. Obviously, her fierce intellect drove her out and up, but I don't see even a fierce intellect working the same trick on a girl from, say, Blackbird Leys estate. Where would she plan to escape to in Britain, in a drugpacked truck with her poetry books and six 17-year-old boys? Where is her Los Angeles? Brighton? Aberdeen?