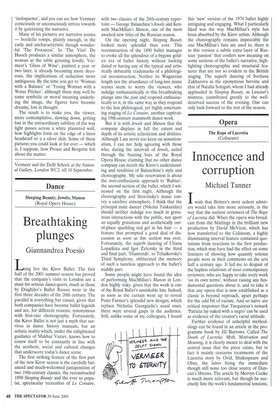 Long live the Kirov Ballet. The first half of the 2001 summer season has proved that the company's visits to London are a must for serious dance-goers, much as those by Diaghilev's Ballet Russes were in the first three decades of the 20th century. The parallel is everything but casual, given that both companies have become ballet legends and are, for different reasons, synonymous with first-rate choreography. Fortunately, the Kirov Ballet is not just a myth that survives in dance history manuals, but an artistic reality which, under the enlightened guidance of Makhar Vaziev, knows how to renew itself to be constantly in line with the aesthetic, social and cultural changes that underscore today's dance scene.

The first striking feature of the first part of the new Kirov season is the carefully balanced and much-welcomed juxtaposition of two 19th-century classics, the reconstructed 1890 Sleeping Beauty and the ever so popular, spectacular recreation of Le Corsaire, with two classics of the 20th-century repertoire — George Balanchine's Jewels and Kenneth MacMillan's Manon, one of the most awaited new titles of the Russian season.

On the opening night, Sleeping Beauty looked more splendid than ever. This reconstruction of the 1890 ballet manages to evoke all the splendour of a bygone golden era of ballet history without looking dated or having any of the typical and artistically debatable trademarks of a philological reconstruction. Neither its Wagnerian length nor the abundance of long-lost mime scenes seem to worry the viewers, who indulge enthusiastically in this breathtaking plunge into the past and respond enthusiastically to it, in the same way as they respond to the less philological, yet highly entertaining staging of Le Corsaire, another captivating 19th-century mammoth dance work.

But it is with Jewels and Manon that the company displays in full the extent and depth of its artistic eclecticism and abilities. Although I am never too keen on sensationalism, I can not help agreeing with those who, during the intervals of Jewels, sailed through the buzzing bars of the Royal Opera House claiming that no other dance company can match the Kirov's understanding and rendition of Balanchine's style and choreography. My sole reservation is about the over-enthusiastic approach to 'Rubies', the second section of the ballet, which I witnessed on the first night. Although the choreography and Stravinsky's music convey a carefree atmosphere, I think that the principal male dancer (Nikolai Tsiskaridze) should neither indulge too much in gratuitous interactions with the public, nor sport an equally gratuitous and aesthetically outof-place sparkling red gel in his hair — a feature that prompted a good deal of discussion as soon as this section was over. Fortunately, the superb dancing of Uliana Lopatkina and Igor Zelensky in the third and final part, 'Diamonds', to Tchaikovslcy's Third Symphony, obliterated the memory of such a tasteless approach to the ballet's middle part.

Some people might have found the idea of performing MacMillan's Manon in London highly risky, given that the work is one of the Royal Ballet's unsinkable hits. Indeed, as soon as the curtain went up to reveal Peter Farmer's splendid new designs, which replace Nicholas Georgiadis's usual ones, there were several gasps in the audience. Still, unlike some of my colleagues, I found this 'new' version of the 1974 ballet highly intriguing and engaging. What I particularly liked was the way MacMillan's style has been absorbed by the Kirov artists. Although the choreography remains impeccably the one MacMillan's fans are used to, there is in this version a subtle extra layer of Russian 'passion' that confers new meaning on some sections of the ballet's narrative, highlighting choreographic and structural features that are not so evident in the British staging. The superb dancing of Svetlana Zakharova as the eponymous heroine and that of Natalia Sologub, whom I had already applauded in Sleeping Beauty, as Lescaut's mistress, contributed greatly to the welldeserved success of the evening. One can only look forward to the rest of the season.