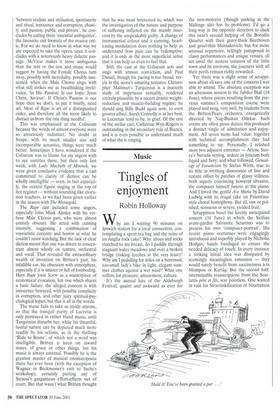 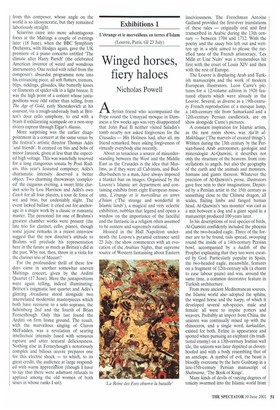 Why am I waiting 90 minutes on Ipswich station for a local connection, contemplating a spent tea bag and the ruins of an Anglia rock cake? Why, shoes and socks clutched to my breast, do I paddle through stagnant water meadows and over a broken bridge (risking leeches at the very least)? Why am I pedalling for miles on a borrowed, too-small lady's bike in light, elegant summer clothes against a wet wind? What one suffers for pleasure, amusement, culture.

It's the annual lure of the Aldeburgh Festival quaint and awkward as ever for the non-motorist (though parking at the Maltings also has its problems). I'd go a long way in the opposite direction to duck this year's second helping of the Borodin Quartet with their gravy-thick Beethoven and gruel-thin Shostakovich; but for more unusual repertoire, tellingly juxtaposed in classy performances and unique venues, all set amid the austere cosiness of the little town and its environs, the journeys with all their perils remain richly rewarded.

Yet there was a slight sense of scrappiness about all save one of the concerts I was able to attend. The absolute exception was an afternoon session in the Jubilee Hall (18 June), where pieces resulting from the previous summer's composition course were played and sung, very well, by students from the Britten/Pears orchestra, energetically directed by Nag-Bushan Oclekar. Such events are often pious duties; this produced a distinct tingle of admiration and enjoyment. All seven items had value: together with technical accomplishment they had something to say. Personally, I relished most two adjacent extremes — Arlene Sierra's Neruda setting, ardent in lyricism both liquid and fiery; and what followed, Genealogy of Fanaticism by Stefan Wirth, true to its title in writhing dissonance of line and texture offset by patches of glassy stillness, both aspects convincing however abrasive, the composer himself furioso at the piano. And I loved the gentle Ave Maria by David Ludwig with its frugal take on Palestrinastyle choral homophony. But all, raw or polished, sensuous or severe, yielded fruit.

Scrappiness beset the keenly anticipated concert (16 June) in which the Sicilian avant-gardist Salvatore Sciarrino was to present his own 'composer-portrait'. His recent piano nocturnes were engagingly introduced and superbly played by Nicholas Hodges, hands bandaged to ensure the needed delicacy of touch. In every instance a striking initial idea was dissipated by seemingly meaningless extension — they would surely benefit from succinctness a la Mompou or Kurtag. But the second half, interminable transcriptions from the Scarlattis pere et fils, was pointless. One waited in vain for Stravinskification or bizarreness

from this composer, whose angle on the world is so idiosyncratic, but they remained laboriously straight.

Sciarrino came into more advantageous focus at the Maltings a couple of evenings later (18 June), when the BBC Symphony Orchestra, with Hodges again, gave the UK premiere of a piano concerto entitled 'The climate after Harry Partch' (the celebrated American inventor of weird and wondrous instruments). One reeled with relief from the composer's absurdist programme note into his entrancing piece, all soft flutters, tremors, blips, ticklings, glissades, like butterfly kisses or filaments of spider silk in a light breeze. It was the high point of a concert whose juxtapositions were odd rather than telling, from The Age of Gold, early Shostakovich at his coarsest, via a rough-and-ready bash at Britten's dour cello symphony, to end with a brash if exhilarating scampede on a non-stop riviera express through Elgar'sAlassio.

More surprising was the earlier disappointment in a concert at the same venue by the festival's artistic director Thomas Ades 'and friends'. It centred on bits and bobs of minor Janacek, given at less than the expected high voltage. This was wastefully reserved for a long clangorous sonata by Poul Ruders, this year's featured composer; Ades's charismatic intensity deserved a better object. Two charming throwaways 'completed' the exiguous evening, a sweet little clarinet solo by Lou Harrison and Ades's own Catch for all four players, a tour de force of wit and brio, but undeniably slight. The event lacked ballast: it cried out for anchorage in a major work by a classic or romantic master. The personnel for one of Brahms's greatest chamber works were present (the late trio for clarinet, cello, piano), though some jejune remarks in a recent interview suggest that the new director's attitude to Brahms will preclude his representation here in the future as much as Britten's did in the past. Why not, then, throw in a viola for the clarinet trio of Mozart?

Far the profoundest thrill of these few days came in another somewhat uneven Maltings concert, given by the Arditti Quartet (17 June). Here the juxtapositions were again telling, indeed illuminating: Britten's enigmatic last quartet and Ades's glinting Arcadiana stood alongside two interrelated modernist masterpieces which both have recourse to a solo soprano, the SchOnberg 2nd and the fourth of Brian Ferneyhough. Only this last found the Arditti on firm home ground. The result, with the marvellous singing of Claron McFadden, was a revelation of searing intellectual intensity fused with sensuous rapture and utter textural deliciousness. Nothing else in Ferneyhough's notoriously complex and bilious ceuvre prepares one for this electric shock — to which, to its great credit, the audience at large responded with warm appreciaion (though I have to say that there were adamant refusals to applaud among the old women of both sexes in whose ranks I sat).