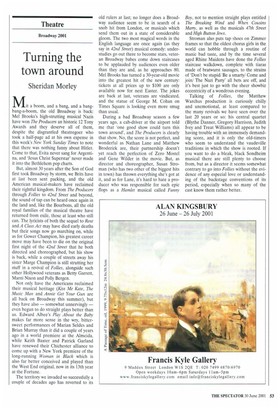 Turning the town around

Mit a boom, and a bang, and a bangbang-a-boom, the old Broadway is back: Mel Brooks's high-strutting musical Nazis have won The Producers an historic 12 Tony Awards and they deserve all of them, despite the disgruntled theatregoer who took a half-page ad at his own expense in this week's New York Sunday Times to note that there was nothing funny about Hitler. Come to that, Evita never sang for Argentina, and 'Jesus Christ Superstar' never made it into the Bethlehem pop charts.

But, almost 30 years after the Son of God first took Broadway by storm, we Brits have at last been sent packing, and the old American musical-makers have reclaimed their rightful kingdom. From The Producers through Follies to 42nd Street and beyond, the sound of tap can be heard once again in the land and, like the Bourbons, all the old royal families of the musical theatre have returned from exile, those at least who still can. The lyricists of both the sequel to Rent and A Class Act may have died early deaths but their songs now go marching on, while as for Gower Champion, his greatest career move may have been to die on the original first night of the 42nd Street that he both directed and choreographed, but his show is back, while a couple of streets away his sister Marge Champion is still strutting her stuff in a revival of Follies, alongside such other Hollywood veterans as Betty Garrett, Marni Nixon and Polly Bergen.

Not only have the Americans reclaimed their musical heritage (Kiss Me Kate, The Music Man and Annie Get Your Gun are all back on Broadway this summer), but they have also — somewhat unnervingly — even begun to do straight plays better than us. Edward Albee's Play About the Baby makes far more sense in the wry, bittersweet performances of Marian SeIdes and Brian Murray than it did a couple of years ago in a world premiere at the Almeida, while Keith Baxter and Patrick Garland have renewed their Chichester alliance to come up with a New York premiere of the long-running Woman in Black which is also far better conceived and played than the West End original, now in its 13th year at the Fortune.

The territory we invaded so successfully a couple of decades ago has reverted to its old rulers at last; no longer does a Broadway audience seem to be in search of a snob hit from London, or musicals which send them out in a state of considerable gloom. The two most magical words in the English language are once again (as they say in 42nd Street) musical comedy: understudies go out there to become stars. veteran Broadway babes come down staircases to be applauded by audiences even older than they are and, as he approaches 80, Mel Brooks has turned a 30-year-old movie into the greatest hit of the new century: tickets at all prices up to $100 are only available now for next Easter. The jokes are back at last, veterans are vindicated, and the statue of George M. Cohan on Times Square is looking even more smug than usual.

During a bad Broadway season a few years ago, a cab-driver at the airport told me that one good show could turn this town around', and The Producers is clearly that show. No, the score is not perfect, and wonderful as Nathan Lane and Matthew Broderick are, their partnership doesn't yet reach the perfection of Zero Mostel and Gene Wilder in the movie. But, as director and choreographer, Susan Stroman (who has two other of the biggest hits in town) has thrown everything she's got at it, and as for Lane, it's hard to hate a producer who was responsible for such epic flops as a Hamlet musical called Funny

Boy, not to mention straight plays entitled The Breaking Wind and When Cousins Many, as well as the musicals 97th Street and High Button Jews.

Stroman also puts tap shoes on Zimmer frames so that the oldest chorus girls in the world can hobble through a routine of manic bad taste, and by the time several aged Rhine Maidens have done the Follies staircase walkdown, complete with tiaras made of bratwurst sausages, to the strains of 'Don't be stupid/ Be a smarty/ Come and join/ The Nazi Party' all bets are off, and it's best just to go with the sheer showbiz eccentricity of a wondrous evening.

Talking of Follies, the Matthew Warchus production is curiously chilly and unemotional, at least compared to the many revivals we have seen over the last 20 years or so: his central quartet (Blythe Danner, Gregory Harrison, Judith Ivey and Treat Williams) all appear to be having trouble with an immensely demanding score, and it is only the old-timers who seem to understand the vaudeville traditions in which the show is rooted. If you want to do a bleak, black Sondheim musical there are still plenty to choose from, but as a director it seems somewhat contrary to go into Follies without the evidence of any especial love or understanding of the backstage conventions of its period, especially when so many of the cast know them rather better.