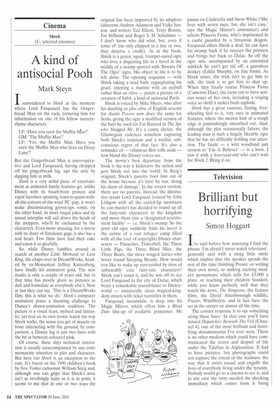 A kind of antisocial Pooh

Isurrendered to Shrek at the moment where Lord Farquaard has the Gingerbread Man on the rack, torturing him for information on one of his fellow nurseryrhyme characters.

But the Gingerbread Man is unco-operative and Lord Farquaard, having chopped off his gingerbread leg, ups the ante by dipping him in milk.

Shrek is a very artful piece of entertainment as animated family features go: unlike Disney with its beach-bozo princes and vapid heroines spouting learn-to-paint-withall-the-colours-of-the-wind PC pap, it won't make discriminating grown-ups vomit; on the other hand, its more risque jokes and sly sexual interplay will sail above the heads of the moppets, who'll be enchanted by the characters. Even more amazing, for a movie with its share of flatulence gags, it also has a real heart. Few films have had their cake and eaten it so gleefully.

So, while Disney fumbles around in search of another Little Mermaid or Lion King, the chaps over at DreamWorks, headed by ex-Mouseman Jeffrey Katzenberg, have finally hit animation gold. The new studio is only a couple of years old, but in that time has mostly given us pictures as dull and formulaic as everybody else's. Now at last they can say, 'This is a DreamWorks film; this is what we do.' Shrek's computer animation poses a daunting challenge to Disney's drawn-animation tradition. The picture is a visual feast, stylised and fantastic, yet real on its own terms: watch the way Shrek walks, the sense you get of muscle on bone interacting with the ground; by comparison, a Disney leg is just two lines with the bit in between coloured pink.

Of course, these days technical innovation is usually unaccompanied by any commensurate attention to plot and character. But here too Shrek is an exception to the rule. It's based on the 1990 children's book by New Yorker cartoonist William Steig and, although one can gripe that Shrek's nose isn't as revoltingly hairy as it is in print, it seems to me that in one or two ways the original has been improved by its adaptors (directors Andrew Adamson and Vicky Jenson, and writers Ted Elliott, Terry Rossio, Joe Stillman and Roger S. H. Schulman — I don't know who did what, but, even if some of 'em only chipped in a line or two, they deserve a credit). As in the book, Shrek is a green, squat, trumpet-eared ogre who lives a disgusting life in a hovel in the middle of a swamp spotted with 'Beware Of The Ogre' signs. His object in life is to be left alone. The opening sequence — with Shrek taking a mud bath, regurgitating his gruel, enjoying a martini with an eyeball rather than an olive — paints a picture of a creature of habit, a kind of antisocial Pooh.

Shrek is voiced by Mike Myers, who after his dazzling ne plus ultra of English accents for Austin Powers now does the same for Scots, giving the ogre a modified version of the burr he used for Fat Bastard in The Spy who Shagged Me. It's a canny choice, the Glaswegian cadences somehow capturing both Shrek's isolation and a wistful, subconscious regret of that fact. It's also a reminder of — villainous Brit toffs aside — how bland the Disney voices are.

The movie's best departure from the book is the way it kickstarts the action and gets Shrek out into the world. In Steig's original, Shrek's parents boot him out of the house because it's time he was 'doing his share of damage-. In the screen version, there are no parents. Instead, the diminutive tyrant Lord Farquaad (voiced by John Lithgow with all the curled-lip snottiness he can muster) has decided to round up all the fairy-tale characters in the kingdom and move them into a 'designated resettlement facility' — i.e. Shrek's swamp. So the poor old ogre suddenly finds his hovel is the centre of a vast refugee camp filled with all the (out of copyright) Disney characters — Pinocchio, Tinkerbell, the Three Little Pigs, the Three Blind Mice, the Three Bears, the three winged fairies who hover round Sleeping Beauty. How would you like to wake up surrounded by trios of unbearably cute fairy-tale characters? Shrek can't stand it, and he sets off to see Lord Farquaad in the city of Dulac, which bears a remarkable resemblance to Disneyworld — unnaturally clean magical-kingdom streets with ticket turnstiles in them.

Farquaad, meanwhile, is deep into his Magic Mirror, which offers him a Blind Date line-up of available princesses. He passes on Cinderella and Snow White (`She lives with seven men, but she isn't easy,' says the Magic Mirror's announcer) and selects Princess Fiona, who's imprisoned in a castle guarded by a ferocious dragon. Farquaad offers Shrek a deal: he can have his swamp back if he rescues the princess and brings her back to Dulac. So off the ogre sets, accompanied by an unwanted sidekick he can't get rid off: a garrulous donkey (Eddie Murphy, on fine form). As Shrek notes, the trick isn't to get him to talk, the trick is to get him to shut up. When they finally rescue Princess Fiona (Cameron Diaz), she turns out to have serious issues of her own, including a singing voice so shrill it makes birds explode.

Shrek has a great raucous, fizzing, freewheeling feel to it, very rare in animated features, where the merest hint of a rough edge is painstakingly smoothed out. And, although the plot occasionally falters, the leading man is such a hugely likeable ogre that he has no difficulty holding our attention. The finale — a wild woodland jam session to 'I'm A Believer' — is a hoot. I saw it with a four-year-old who can't wait for Shrek 2. Bring it on.