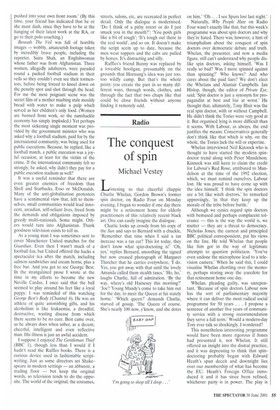 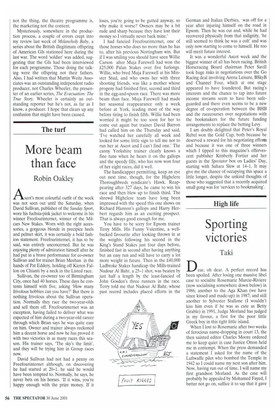 The conquest of spin

Listening to that cheerful chappie Charlie Whelan, Gordon Brown's former spin doctor, on Radio Four on Monday evening, I began to wonder if one day there might be a retirement home for elderly practitioners of this relatively recent black art. One can easily imagine the dialogue.

Charlie looks up crossly from his copy of the Sun and says to Bernard with a chuckle, 'Remember that time when I said a tax increase was a tax cut? This lot today, they don't know what spin-doctoring is!"Oh, yes,' replies Bernard, smoothing the signed but now creased photograph of Margaret Thatcher that he carries everywhere, 'I do. Yes, you got away with that until the lovely Amanda called them stealth taxes.' ho,' laughs Charlie, full of admiration. 'By the way, where's old Hainesey this morning?' 'Joe? Young Mandy's come to take him out for the day, to meet the Queen at his stately home.' Which queen?' demands Charlie, starved of gossip. 'The Queen of course. She's nearly 100 now, y'know, and she dotes on him.' 'Oh. I see Spurs lost last night.'

Naturally, Why People Hate on Radio Four wasn't exactly like that, but this week's programme was about spin doctors and why they're hated. There was, however, a hint of triumphalism about the conquest of spin doctors over democratic debate and truth. Whelan, the presenter, and now a media figure, still can't understand why people dislike spin doctors, asking himself, 'Was I really so bad? Was I more spinned against than spinning?' Who knows? And who cares about the paid liars? We don't elect the Whelarts and Alastair Campbells. Ian Hislop, though, the editor of Private Eye, said, 'Spin doctor is just a synonym for propagandist at best and liar at worst.' He thought that, ultimately, Tony Blair was the real spin doctor, with or without Campbell. He didn't think the Tories were very good at it. But organised lying is more difficult than it seems. With Labour, as always, the end justifies the means; Conservatives generally don't think like that which is why, on the whole, the Tories lack the will or expertise.

Whelan interviewed Neil Kinnock who is thought to have started the modern spindoctor trend along with Peter Mandelson. Kinnock was still keen to claim the credit for Labour's Red Rose, attributed to Mandelson at the time of the 1992 election, which, we must remind ourselves, Labour lost. He was proud to have come up with the idea himself. 'I think the spin doctors are a bit like witch doctors,' he remarked approvingly, In that they keep up the morale of the tribe before battle.'

• Although we cynics regard spin doctors with bemused and perhaps complacent tolerance — this is the way the world is, we mutter — they are a threat to democracy. Nicholas Jones, the earnest and principled BBC political correspondent, put his views on the line. He told Whelan that people like him got in the way of legitimate attempts to question politicians. 'You've even undone the microphone lead to a television camera.' When he said this, I could visualise Whelan chortling over the memory, perhaps storing away the anecdote for that retirement home one day.

Whelan, pleading guilty, was unrepentant. 'Because of spin doctors Labour now has the sort of parliamentary majority where it can deliver the most radical social programme for 50 years . . . I propose a sentence of another five years of community service with a strong recommendation they serve a full term.' Would a modern-day Tory ever talk so shockingly, I wondered?

This nonetheless interesting programme would have been more rigorous if Jones had presented it. not Whelan. It still offered an insight into the dismal practice, and it was depressing to think that spindoctoring probably began with Edward Heath's spun deceit and downright lies over our membership of what has become the EU. Heath's Foreign Office introduced it and it has since been refined, whichever party is in power. The play is not the thing, the theatre programme is, the marketing not the content.

Mysteriously, somewhere in the production process, a couple of errors crept into my review last week of Melancholy Baby, a series about the British illegitimate offspring of American GIs stationed here during the last war. The word 'soldier was added, suggesting that the GIs had been interviewed for each programme. Those doing the talking were the offspring not their fathers. Also, I had written that Martin Weitz Associates was an outstanding independent radio producer, not Charles Wheeler, the presenter of an earlier series, The Evacuation: The True Story. Wheeler is certainly an outstanding reporter but he's not, as far as I know, a producer. I hope that clears up any confusion that might have been caused.