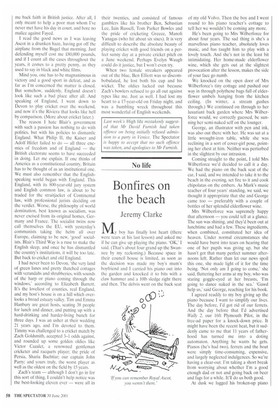 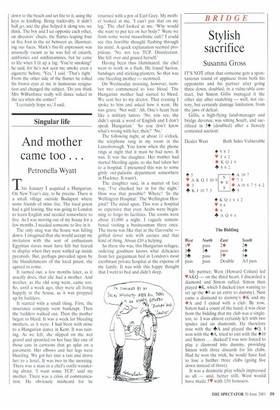 Bonfires on the beach

My boy has finally lost heart (there were tears at his last lesson) and asked me if he can give up playing the piano. OK,' I said. (That's about four grand up the Swannee by my reckoning.) Because space in their council house is limited, as soon as the decision was made my boy's mum's boyfriend and I carried his piano out into the garden and knocked it to bits with a claw hammer and a 101b sledge right there and then. The debris went on the back seat

of my old Volvo. Then the boy and I went round to his piano teacher's cottage to tell her we wouldn't be coming any more.

He's been going to Mrs Wilberforce for about four years. The sad thing is she's a marvellous piano teacher, absolutely loves music, and has taught him to play with a lovely touch. And she's not in the least bit intimidating. Her home-made elderflower wine, which she gets out at the slightest provocation after the lesson, makes the side of your face go numb.

We knocked on the open door of Mrs Wilberforce's tiny cottage and pushed our way in through polythene bags full of elderflower umbels hanging from the kitchen ceiling. (In winter, a stream gushes through.) We continued on through to her luxuriant back garden where Mrs Wilberforce would, we correctly guessed, be sunning her semi-naked self on the lounger.

George, an illustrator with pen and ink, was also out there with her. He was sat at a little wrought-iron table, while she was reclining in a sort of cover-girl pose, pointing her chest at him. Neither was perturbed in the slightest by our intrusion.

Coming straight to the point, I told Mrs Wilberforce we'd decided to call it a day. We had the piano on the back seat of the car, I said, and we intended to take it to the beach in the evening, set fire to it and cook chipolatas on the embers. As Mark's music teacher of four years' standing, we said, we thought it appropriate that she and George came too — preferably with a couple of bottles of her splendid elderflower wine.

Mrs Wilberforce was supremely happy that afternoon — you could tell at a glance. The sun was shining, and they'd been out at lunchtime and had a few. These ingredients, when combined, constituted her idea of heaven. Under normal circumstances she would have burst into tears on hearing that one of her pupils was giving up, but she hasn't got that many perfect summer afternoons left. Rather than let our news spoil this one, she made light of it for the time being. 'Not only am I going to come,' she said, fluttering her arms at my boy, who was staring goggle-eyed at her breasts, 'I'm going to dance naked in the sea.' Gawd help us,' said George, reaching for his book.

I agreed readily to my boy giving up the piano because I want to simplify our lives. The day before, I'd got rid of our ferrets. And the day before that I'd advertised Wally 2, our 16ft Plymouth Pilot, in the free-ad paper for a knock-down price. It might have been the recent heat, but it suddenly came to me that 11 years of fatherhood has turned me into a doting automaton. Anything he wants he gets. Pianos (he's had two), ferrets and the boat were simply time-consuming, expensive, and largely neglected indulgences. So we're having a clear-out. I'm taking a short break from worrying about whether I'm a good enough dad or not and going back on beer and fags for a while. It'll do us both good.

At dusk we lugged his broken-up piano

down to the beach and set fire to it, using the keys as kindling. Being tinder-thy, it didn't half go, and the glue helped it along too, we think, The boy and I sat opposite each other, on directors' chairs, the flames leaping four or five foot in the air between us, illuminating our faces. Mark's fire-lit expression was unusually vacant as he was full of catarrh, antibiotics and antihistamines. but he came to life when I lit up a fag, 'You're smoking!' he said, for he's not seen me smoke even a cigarette before. 'Yes,' I said. 'That's right,' From the other side of the flames he rolled his brown eyes at me in humorous resignation and changed the subject. 'Do you think Mrs Wilberforce really will dance naked in the sea when she comes?

'I certainly hope so,' I said.