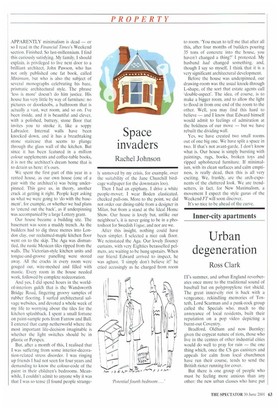 APPARENTLY minimalism is dead — or so I read in the Financial Times's Weekend section. Finished, So last-millennium. I find this curiously satisfying. My family, I should explain, is privileged to live next door to a brilliant architect, John Pawson, who has not only published one fat book, called Minimum, but who is also the subject of several monographs celebrating his bare, prismatic architectural style. The phrase 'less is more' doesn't do him justice. His house has very little by way of furniture: no pictures or doorknobs, a bathroom that is actually a vast, wet room, and so on. I've been inside, and it is beautiful and clever, with a polished, buttery, stone floor that invites you to stroke it, like a soppy Labrador. Internal walls have been knocked down, and it has a breathtaking stone staircase that seems to plunge through the glass wall of the kitchen. But since it has been featured in a million colour supplements and coffee-table books, it is not the architect's dream home that is to detain us here: it's ours.

We spent the first part of this year in a rented house, as our own house (one of a pair with the architect's) was being underpinned. This gave us, in theory, another crack at getting it right. People kept asking us what we were going to 'do with the basement', for example, or whether we had plans to 'extend out the back', as if underpinning was accompanied by a large Lottery grant.

Our house became a building site. The basement was soon a muddy trench. As the builders had to dig three metres into London clay, our reclaimed-maple kitchen floor went on to the skip. The Aga was dismantled, the rustic Mexican tiles ripped from the walls. The Victorian-style kitchen units and tongue-and-groove panelling were stored away. All the cracks in every room were gouged out, wire-meshed and filled with mastic. Every room in the house needed work, followed by complete redecoration.

But, after a month of this, I realised that I was suffering from some interior-decoration-related stress disorder. I was ringing up friends I had not seen for four years and demanding to know the colour-code of the paint in their children's bedrooms. Meanwhile, I couldn't admit to anyone why it was that I was so tense (I found people strange ly unmoved by my crisis, for example, over the suitability of the Jane Churchill birdcage wallpaper for the downstairs loo).

Then I had an epiphany. I drive a white people-mover; I wear Boden elasticated, checked pull-ons. More to the point, we did not order our dining-table from a designer in Milan, but from a stand at the Ideal Home Show, Our house is lovely but, unlike our neighbour's, it is never going to be in a photoshoot for Swedish Vogue, and nor are we.

After this insight, nothing could have been simpler. I selected a nice oak floor. We reinstated the Aga. Our lovely flouncy curtains, with very Eighties betasselled pelmets, are waiting to be hung upstairs. When our friend Edward arrived to inspect, he was aghast. 'I simply don't believe it?' he cried accusingly as he charged from room to room. 'You mean to tell me that after all this, after four months of builders pouring 35 tons of concrete into the house, you haven't changed a thing?' I protested. My husband had changed something, and, though I say so myself, I think that it is a very significant architectural development.

Before the house was underpinned, our drawing-room was the usual knock-through L-shape, of the sort that estate agents call 'double-aspect'. The idea, of course, is to make a bigger room, and to allow the light to flood in from one end of the room to the other. Well, you may find this hard to believe — and I know that Edward himself would admit to feelings of admiration at the boldness of our move — but we have rebuilt the dividing wall.

Yes, we have created two small rooms out of one big one. We have split a space in two, If that's not avant-garde, I don't know what is. Our house is simply bursting with paintings, rugs, books, broken toys and ripped upholstered furniture, If minimalism, with its clean surfaces and calm emptiness, is really dead, then this is all very exciting. We, frankly, are the arch-exponents of the cluttered look. We are trendsetters, in fact, for New Maximalism, a movement I expect the style gurus of the Weekend FT will soon discover.

It's so nice to be ahead of the curve.