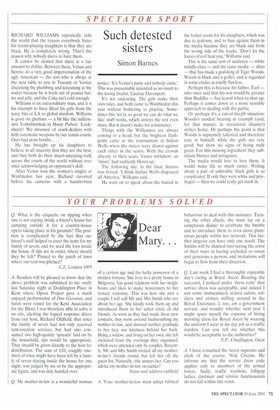 Q. What is the etiquette on tipping when one is

not staying inside a friend's house but camping outside it for a country-house opera taking place in his grounds? The position is complicated by the fact that our friend's staff helped to erect the tents for my family of seven, and we used the loos inside the house. If tips are in order, where should they be left? Pinned to the patch of lawn where our tent was pitched?

C.J., London SW9 A. Readers will be pleased to know that the above problem was submitted to me orally last Saturday night at Doddington Place in Kent where Opera Project gave a much enjoyed performance of Don Giovanni, and funds were raised for the Kent Association for the Blind. I was therefore able to solve it on site, eliciting the logical response direct from our host, Richard Oldfield. that since the family of seven had not only received tent-erection services, but had also consumed two high-quality 'spreads' laid on by the household, tips would be appropriate. They should be given directly to the host for distribution. The sum of £10, roughly onethird of what might have been left by a family of seven staying inside the house for one night, was judged by me to be the appropriate figure, and was duly handed over.

of a certain age and the lucky possessor of a modest fortune. She lives in a pretty house in Belgravia, has good relations with her neighbours and likes to make newcomers to her terrace welcome. This was how she met a couple I will call Mr and Mrs Smith who are about her age. She kindly took them up and introduced them to her select circle of old friends. As soon as they had made these new contacts, they went around badmouthing my mother-in-law, and showed neither gratitude to her face nor kindness behind her back. Being a widow, and living on her own, she felt excluded from the evenings they organised, which were attended only by couples. Recently, Mr and Mrs Smith invited all my motherin-law's friends round, but left her off the guest list. Naturally, this annoys her. Can you advise my mother-in-law on tactics?

Name and address withheld behaviour to deal with this nuisance. Turning the other cheek, she must lay on a sumptuous dinner to celebrate the Smiths and to introduce them to even more glamorous people within her network. This further largesse can have only one result. The Smiths will be shamed into seeing the error of their ways in having excluded so sweet and generous a person, and invitations will begin to flow from their direction.