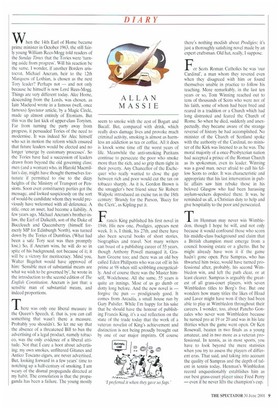 When the 14th Earl of Home became prime minister in October 1963, the still fairly young William Rees-Mogg told readers of the Sunday Times that the Tories were 'turning aside from progress'. Will his reaction be the same, I wonder, if another Borders aristocrat, Michael Ancram, heir to the 12th Marquess of Lothian, is chosen as the next Tory leader? Perhaps not — and not only because he himself is now Lord Rees-Mogg. Things are very different today. Alec Home, descending from the Lords, was chosen, as lain Macleod wrote in a famous (well, once famous) Spectator article, by a Magic Circle, made up almost entirely of Etonians. But this was the last kick of upper-class Toryism. Far from turning the party away from progress, it persuaded Tories of the need to modernise. It was indeed Sir Alec himself who set in motion the reform which ensured that future leaders would be elected and no longer 'emerge by customary processes'. So the Tories have had a succession of leaders drawn from beyond the old governing class; men (and a woman) who, in Harold Macmillan's day, might have thought themselves fortunate if permitted to rise to the dizzy heights of the Ministry' of Transport or Pensions. Soon even constituency parties got the message, and looked suspiciously on the sort of would-be candidate whom they would previously have welcomed with all deference. A title, once an asset, had become a liability. A few years ago, Michael Ancram's brother-inlaw, the Earl of Dalkeith, son of the Duke of Buccleuch and Queensberry (himself formerly MP for Edinburgh North), was turned down by the Tories of Dumfries. (What had been a safe Tory seat was then promptly lost.) So, if Ancram wins, he will do so in spite of his background, not because of it; it will be a victory for meritocracy. Mind you, Walter Bagehot would have approved of him: 'Sensible men of substantial means are what we wish to be governed by', he wrote in the introduction to the second edition of The English Constitution, Ancram is just that: a sensible man of substantial means, and indeed proportions.

There was only one liberal measure in the Queen's Speech, if, that is, you can call something that wasn't there a measure. Probably you shouldn't. So let me say that the absence of a threatened Bill to ban the advertising of a legal product, namely tobacco, was the only evidence of a liberal attitude. Not that I care a hoot about advertising; my own smokes, unfiltered Gitanes and Antic° Toscano cigars, are never advertised. But, looking forward in a few years' time to notching up a half-century of smoking, I am weary of the dismal propaganda directed at my habit. The consolation is that the propaganda has been a failure. The young mostly

seem to smoke with the zest of Bogart and Baca11. But, compared with drink, which really does damage lives and provoke much criminal activity, smoking is almost as harmless an addiction as tea or coffee. All it does is knock some time off the worst years of life. Meanwhile the anti-smoking Puritans continue to persecute the poor who smoke more than the rich, and so grip them tight in their poverty. Any Chancellor of the Exchequer who really wanted to close the gap between rich and poor would cut the tax on tobacco sharply. As it is, Gordon Brown is the smuggler's best friend since Sir Robert Walpole introduced an excise tax in the 18th century: 'Brandy for the Parson, 'Baccy for the Clerk', as Kipling put it.

Francis King published his first novel in 1946. His new one, Prodigies, appears next week. It is, I think, his 27th, and there have also been several books of short stories, biographies and travel. Not many writers can boast of a publishing career of 55 years, though Anthony Powell managed it, Graham Greene too; and there was an old boy called Eden Phillpotts who was cut off in his prime at 98 when still scribbling energetically. And of course there was the Master himself, Wodehouse. All the same. 55 years is quite an innings. Most of us go dumb or dotty long before. And the new novel is — forgive the pun — prodigiously good. It comes from Arcadia, a small house run by Gary Pulsifer. While I'm happy for his sake that he should have the honour of publishing Francis King, it's a sad reflection on the state of the trade today that the work of a veteran novelist of King's achievement and distinction is not being proudly brought out by one of our major imprints. Of course there's nothing modish about Prodigies; it's just a thoroughly satisfying novel made by an expert craftsman. Old hat, really, I suppose.

For Scots Roman Catholics he was 'our Cardinal', a man whom they revered even when they disagreed with him or found themselves unable in practice to follow his teaching. More remarkably, in the last ten years or so, Tom Winning reached out to tens of thousands of Scots who were not of his faith, some of whom had been bred and reared in a tradition or a Church which had long distrusted and feared the Church of Rome. So when he died, suddenly and unexpectedly, they became aware of the strange reversal of history he had accomplished. No minister of the Church of Scotland spoke with the authority of the Cardinal, no minister of the Kirk was listened to as he was. The moral majority of a once-Presbyterian nation had accepted a prince of the Roman Church as its spokesman, even its leader. Winning was a good man, never afraid to call his fellow Scots to order. It was characteristic and appropriate that his last intervention in public affairs saw him rebuke those in his beloved Glasgow who had been harassing asylum-seekers deposited there. It was, he reminded us all, a Christian duty to help and give hospitality to the poor and persecuted.

Tim Henman may never win Wimbledon. though I hope he will, and not only because it would confound those who scorn his middle-class background and claim that a British champion must emerge from a council housing estate or a ghetto. But he might already have won it if the game hadn't gone open. Pete Sampras, who has thwarted him twice, would have turned professional after, probably, his second Wimbledon win, and left the path clear, or at least clearer. Sampras is arguably the greatest of all grass-court players, with seven Wimbledon titles to Borg's five. But one wonders how many titles the likes of Hoad and Laver might have won if they had been able to play at Wimbledon throughout their careers. I wonder, too. about Pancho Gonzales who never won Wimbledon because he turned pro at 19 or 20 and was in his late thirties when the game went open. Or Ken Rosewall, beaten in two finals as a young amateur, and in two more as a veteran professional. In tennis, as in most sports, you have to look beyond the mere statistics when you ny to assess the players of different eras. That said, and taking into account the quality of Sampras and the depth of talent in tennis today. Henman's Wimbledon record unquestionably establishes him as our best grass-court player since Fred Perry — even if he never lifts the champion's cup.