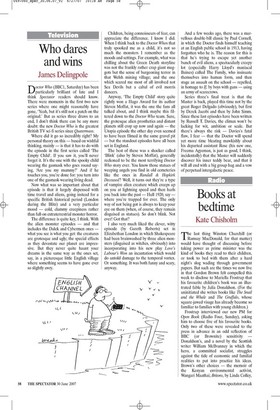 Who dares and wins

James Delingpole Doctor Who (BBC1, Saturday) has been particularly brilliant of late and I think Spectator readers should know. There were moments in the first two new series where one might reasonably have gone, 'Yeah, but it's still not a patch on the original.' But as series three draws to an end, I don't think there can be any more doubt: the new Doctor Who is the greatest British TV sci-fi series since Quatemass.

Where did it go so incredibly right? My personal theory on this — based on wishful thinking, mainly — is that it has to do with the episode in the first series called 'The Empty Child'. If you saw it, you'll never forget it. It's the one with the spooky child wearing the gasmask who goes round saying, 'Are you my mummy?' And if he touches you, you're done for: you turn into one of the gasmask-wearing living dead.

Now what was so important about that episode is that it largely dispensed with time travel and aliens, going instead for a specific British historical period (London during the Blitz) and a very particular mood — cold, clammy creepiness rather than full-on extraterrestrial monster horror.

The difference is quite key, I think. With the alien monster episodes — and that includes the Dalek and Cybermen ones — what you see is what you get: the creatures are grotesque and ugly; the special effects as they devastate our planet are impressive. But they never quite haunt your dreams in the same way as the ones set, say, in a picturesque little English village where something seems to have gone ever so slightly awry.

Children, being connoisseurs of fear, can appreciate the difference. I know I did. When I think back to the Doctor Whos that truly spooked me as a child, it's not so much the monsters I remember as the moods and settings. For example, what was chilling about the Green Death storyline was not the frankly rather crap giant maggots but the sense of burgeoning terror in that Welsh mining village; and the one which scared me most of all involved not Sea Devils but a cabal of evil morris dancers.

Anyway, 'The Empty Child' story quite rightly won a Hugo Award for its author Steven Moffat, it was the one the fans all talked about, and I think maybe this filtered down to the Doctor Who team. Sure, the grotesque alien prosthetics and distant planets still crop up now and again — the Utopia episode the other day even seemed to have been filmed in the same gravel pit — but the standout episodes have all been set in England.

The best of these was a shocker called 'Blink' (also by Steven Moffat), generally reckoned to be the most terrifying Doctor Who story ever. You know those statues of weeping angels you find in old cemeteries like the ones in Randall & Hopkirk Deceased? Well, it turns out they're a type of vampire alien creature which creeps up on you at lightning speed and then hurls you back into the past — Hull 1920, say — where you're trapped for ever. The only way of not being got is always to keep your eye on them (when, of course, they remain disguised as statues). So don't blink. Not ever! Got that?

I also very much liked the clever, witty episode (by Gareth Roberts) set in Elizabethan London in which Shakespeare had been brainwashed by three alien monsters (disguised as witches, obviously) into incorporating into his new play Love's Labour's Won an incantation which would do untold damage to the temporal vortex. Or something. It was both funny and scary, anyway.

And a few weeks ago, there was a marvellous double-bill classic by Paul Cornell, in which the Doctor finds himself teaching at an English public school in 1913, having forgotten who he is. The reason for this is that he's trying to escape yet another bunch of evil aliens, a spectacularly creepy lot (especially Harry Lloyd's maniacal Baines) called The Family, who insinuate themselves into human form, and then stage an assault on the school — repelled, in homage to If by boys with guns — using an army of scarecrows.

Series three's final treat is that the Master is back, played this time not by the great Roger Delgado (obviously), but first by Derek Jacobi and then by John Simm Since these last episodes have been written by Russell T. Davies, the climax won't be lacking for wit, ambition or scale. But there's always the risk — Davies's fatal flaw, I fear — that the Doctor will spend yet more time bleating mawkishly about his departed assistant Rose (his new one, Freema Agyeman, is just as good, I think, incidentally) that the Master will suddenly discover his inner teddy bear, and that it will all end with a big group hug and a vow of perpetual intergalactic peace.