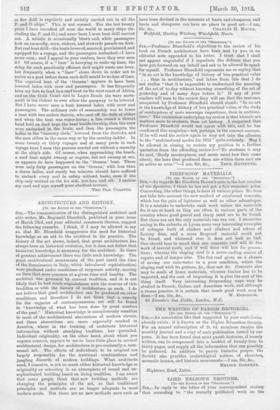 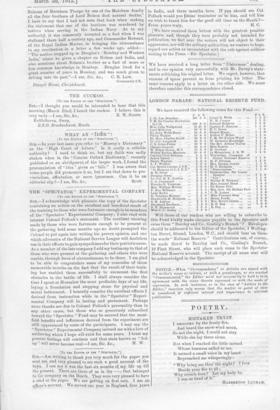 [To THE EDITOR OF Tilt " SPECTATOR."1

Sre.,—In reply to the letter of your correspondent stating that according to "the recently published work on the Nelsons of Burnham Thorpe by one of the Matcham family all the four brothers of Lord Nelson died natural deaths," I have to say that I had not seen that book when making the statement that one of the brothers was murdered by natives when serving in the Indian Navy. As to my. authority, it was 'commonly accepted as a fact When I was stationed there half a century ago, and Commander Rowand, of the Royal Indian Marine, in bringing the circumstance to thy recollection in a letter a few weeks ago, added:- - "The matter cropped up in Douglas's Bombay and Western India,' where he gives a chapter on Nelson and India, and also mentions about Nelson's brother as a fact of more or less common knowledge in Bombay. Douglas lived: for a great number of years in Bombay, and was much given to delving into its past."-4 am, Sir, &c., C. R. Low, Commander I.N.