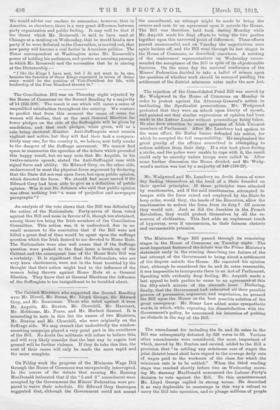 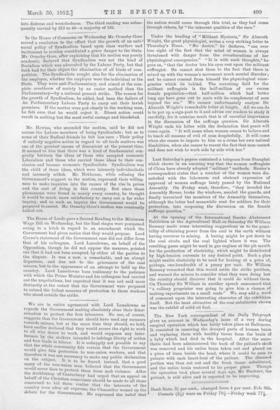 The amendment for including the 5s. and 2s. rates in

the Bill was subsequently defeated by 326 votes to 83. Various other amendments were considered, the most important of which, moved by Mr. Buxton and carried, added to the Bill a provision that 'in settling any minimum rate of wages the joint district board shall have regard to the average daily rate of wages paid to the workmen of the class for which the minimum rate is to be settled." When the third reading stage was reached shortly before two on Wednesday morn- ing Mr. Ramsay MacDonald announced the Labour Party's decision to vote against the Bill. To this announcement Mr. Lloyd George replied in strong terms. He described it as very deplorable to encourage in this way a refusal to carry the 13111 into operation, and so plunge millions of people

into distress and wretchedness. The third reading was subse- quently carried by 213 to 48—a majority of 165.