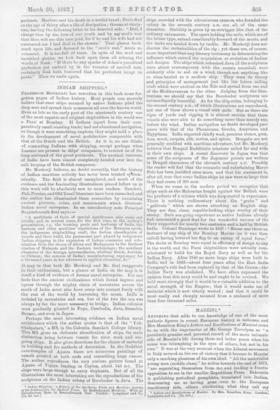 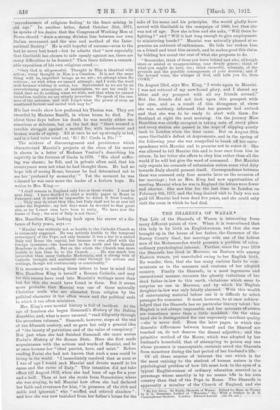 MAZZINI.* ANYTHING that adds to our knowledge of one of

the most pathetic figures in recent European history is welcome, and Mrs. Hamilton King's Letters and Recollections of Martini come to us with the imprimatur of Mr. George Trevelyan as " peculiarly genuine and personal record of the more intimate side of Mazzini's life during those sad latter years when his cause was triumphing in the eyes of others, but not in his own." It was at the very moment when the Liberal movement in Italy seemed on the eve of victory that it became to Mazzini only a mocking phantom of his own ideal. "AU the materialist young men (middle class)," he writes towards the end of 1871, "are separating themselves from me; and leading a frantic opposition to me in the smaller Republican Press. Bakounin is publishing periodical pamphlets, translated into Italian; denouncing me as • having gone over to the European reactionary side, others attributing, what they call my

letters mid Recolleations of Masni. By Idra. Hamilton King. 'London: Loninnaru! and Co. [5a, net, I

'recrudescence of religious feeling' to the fears arising in old age." In another letter, dated October 31st, 1871, he speaks of his desire that the Congress of Working Men at Rome should " draw a strong division line between our own Italian movement and the aim and method of the Inter- national Society." He is still hopeful of success—even to the last he never lost heart—but he admits that "now especially that Garibaldi has chosen to side openly against me, there are ,many difficulties to be fronted." Then there follows a remark- able exposition of his own religious creed :—

. "Only God is all-powerful. Thought in Him is identical with action; every thought in Him is a Creation. It is not the same thing with us, imperfect beings as we aro ; we attempt when He achieves ; we wish when we cannot attempt ; and I write the word wish because wishing is action, too. Surrounded as we are by an overwhelming Atmosphere of materialism, we are too ready to think that we do nothing when we wish, and that when wo cannot transform realities we are utterly powerless. We speak of the one- ness of the universe, and still forget what the power of even an unuttered fervent and sacred wish may be."

His last words show how profound his Theism was. They are 'recorded by Maclaine Reselli, in whose house he died. For about three days before his death he was mostly either un- conscious or delirious, but on the last day "there seemed a terrible struggle against a mortal foe, with incoherent and broken words of agony. All at once he sat up strongly in bed, and in a loud voice cried out, Si ! Si! Credo in Die!

The mixture of discouragement and persistence which characterized Mazzini's projects at the Owe of his eareer is shown in a letter of Madame Venturra describing his captivity in the fortress of Gaeta in 1870. "His chief suffer- ing was shame; he felt, and in private often said, that his countrymen were not what he had thought them. He bad no hope left of seeing Rome, because be had determined not to see her 'profaned by monarchy.'" Yet the moment be was roleased he was once more the leader of a forlorn hope. He writes to Mrs. King :—

" I shall remain in England only two or three weeks. I must be near Italy. I have decided to start a weekly paper in Rome in February. and it would be impossible to. direct it from London. . . . They may do what they like, but Italy shall not be at rest till under the Republic ; my last days must be devoted to that great aim, as my furmer ones have been to unity. We have now the ,frame of Italy; the scul of Italy is not there."

Mrs. Hamilton King, looking back upon his career at a dis- tance of forty years, says :— "Mazzini was certainly not so hostile to the Catholic Church as is Commonly supposed. He was actively hostile to the temporal sovereignty of the Pope, not only because it was a bar to a united Italy and Rome the capital, but because it was allied with the foreign tyrannies—the Austrians in the north and the Spanish .Bourbons in the south. But On the whole tho Church was more , hostile to him than he to the Church. . . . He was much less heterodox than many Catholic Modernists, and a strong vein of Catholic thought and sentiment runs through his actions and writings, though not continuously or consistently."

It is necessary in reading these letters to bear in mind that Mrs. Hamilton King is herself .a Roman Catholic, and may for this reason have read into Mazzini's writings more than but for this she would have found in them. But it seems more probable that Mazzini was one of those naturally Christian souls who are alienated from religion by the political character it too often wears and the political ends to which it too often ministers.

Mrs. King's own-mental history is full-of incident. At the age of fourteen she began Sismondi's History of the Italian Republics, and, what is more unusual, "road diligently through the seventeen volumes." Sismondi, however, stops at the end of the fifteenth century, and so gave her only a general idea of "the beauty of patriotism and of the value of conspiracy." But just when she had finished Sismondi she came across Farini's History of the Roman State. Here she first made

acquaintance with the actions and Words of Mazzini, and he at once became her "ideal patriot, hero, and saint." Before reading Farini she had not known that such a man could be living in the world. "I immediately resolved that as soon as I was of age 1 would seek Mazzini and devote myself to his cause and the cause of Italy." This intention did not take effect till August 1862, when she had been of age for a year and a half. Then at last she wrote from Dorsetshire, where she was staying, to tell Mazzini how often she had declared her faith and reverence for him, "in presence of the rich and noble and ignorant" who ." scoffed and uttered slanders " ; and how she was now banished from her father's house for the sake of his name and his principles. She would gladly have. served with Garibaldi in the campaign of 1860, but then she was not of age. Now she is free and she asks, "Will there be- fighting " and " Will it last long enough to give employment.

to ministering hands P" Mazzini was naturally pleased at so genuine an outburst of enthusiasm. He bids her reckon him. as a friend and treat him as such, and he makes good this claim. by bidding her count the cost of what she proposes to do.

"Reconsider, think of those you leave behind and who, although, stern or misled or umtppreciating, may deeply grieve; think of- what you might do here, too ; think earnestly, solemnly, of the grounds and the possible consequences of your decision ; and if the inward voice, the whisper of God, still tells you Go, thew COME."

On August 23rd, siys Mrs. King, "I wrote again to Mazzini. I was not reticent of my new-found glory, and I shared my• letter and my prospect with all my friends around.' But the friends did not look upon this prospect witla. her eyes, and as a result of this divergence of views. she was suddenly informed that her parents had arrived.

and that she was to be ready to start with them for Scotland at eight the next morning. On the journey Miss- Hamilton was chiefly occupied in taking note of every place and every station she passed in the hope of slipping quietly back to London when the time came. But on August 29th. came Garibaldi's defeat at Aspromonte, and in the spring of the following year she was compelled to break off her corre- spondence with Mazzini and to promise not to renew it. She was allowed to tell Mazzini this and to hear once from him in return. In her letter she offers to obey him rather than all the- world if he will but give the word of command. Hitt Mazzini4 only repeats his counsels of submission unless some vital duty. towards Italy should present itself. Correspondence between them was resumed only four months later on the occasion ofi her marriage ; but as Mrs. King had now opportunities of meeting Mazzini when he was in England the letters were fewer and shorter. She saw him for the last time in London on February 8th, 1871, and the long-desired visit to Italy was nob paid till Mazzini had been dead five years, and she could only visit the room in which he had died.