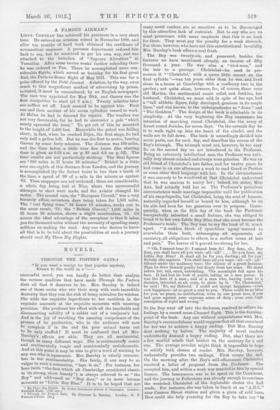 A FAMOUS AIRMAN.* LnarT. CONNEAII has achieved his greatness in

a very short time. He entered an aviation school in November 1909, and after ten months of hard work obtained the certificate of aeronautical engineer. A perverse department ordered him back to sea, but he contrived to get his own way, and was attached to the battalion of " Sapeurs Ahrostiers " at Versaillea. After some twelve weeks' further schooling there he was ordered to Pau. There he accomplished some con- siderable flights, which served as training for his first great feat, the Paris-to-Rome flight of May 1911. This was for a prize offered by the Petit Journal. Aviation, by the way, owes much to this magnificent method of advertising by prizes, initiated, it must be remembered, by an English newspaper. The race was appointed for May 28th, and Garros was the first competitor to start (at 6 a.m.). Twenty minutes later our author set off. Luck seemed to be against him. First one and then another of his seven cylinders ceased to work, At Melun he had to descend for repairs. The weather was not very favourable, for be had to encounter a gale 'which nearly uprooted the trees." To get out of this he mounted to the height of 5,400 feet. Meanwhile the petrol was falling short; in fact, when he reached Dijon, the first stage, he bad only half a gallon left. But he was the first to arrive, beating Gasses by some forty minutes. The distance was 168 miles, and the time taken a little over five hours (the starting time is given as 6.22 a.m. on p. 23 and 6.2 on p. 53). The time results are not particularly striking. The final figures are "928 miles in 21 hours 10 minutes." Bristol is a little over one-eighth of this distance from London, and the journey is accomplished (by the fastest train) in less than a tenth of the time, a speed of .99 of a mile in the minute as against /2. Then stoppages are not reckoned : these are considerable, a whole day being lost at Nice, where two unsuccessful attempts to start were made, and the aviator changed his motor. The second race, the "European Circuit," was a very leisurely affair, seventeen days being taken for 1,061 miles. The "real flying time," 24 hours 18 minutes, works out to the same result, •72; the "British Circuit," 1,006 miles in 22 hours 26 minutes, shows a. slight acceleration, .75. Of course the ideal advantage of the aeroplane is that it takes you the thousand miles without the necessity of spending many millions on making the road. Any one who desires to know all that is to be told about the possibilities of such a journey should read My Three Big Flights.