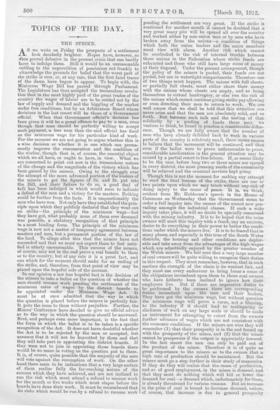 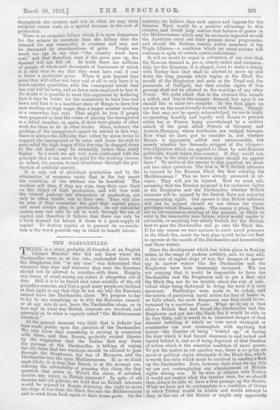 Though this is not the moment for making any attempt to read the final lessons of the strike, there are one or two points upon which we may touch without any risk of doing injury to the cause of peace. It is, we think, evident from Mr. Hobliouse's speech in the House of Commons on Wednesday that the Government mean to order a full inquiry into the causes of the unrest now pre- vailing amongst the industrial classes. If such a wide inquiry takes place, it will no doubt be specially concerned with the mining industry. It is to be hoped that the mine owners will meet this inquiry with a frank, nay an anxious, desire to do everything in their power to better the condi- tions under which the miners live. It is to be feared that in many places, and especially is this true of the South Wales districts, the housing and other conditions are deplor- able and take away from the advantages of the high wages which are admittedly enjoyed by the greater number of the Welsh miners. We feel sure that a very large number of coal owners will be quite willing to recognize their duties in this respect. They must remember, however, that in such matters the strength of the chain is its weakest. link, and they must use every endeavour to bring home a sense of the obligations incumbent upon them to those coal owners who have hitherto been inclined to ignore how their employees live. But if there are imperative duties to be performed by the owners there are corresponding duties incumbent upon the men and their leaders. They have got the minimum wage, but without question the minimum wage will prove a curse, not a blessing, to the industry if it should lead to malingering or slackness of work on any large scale or should be made an instrument for attempting to extort from the owners further advances of wages which are not consistent with the economic conditions. If the miners are wise they will remember (1) that their prosperity is in the end bound up with the prosperity of the mines, and (2) that the mines cannot be prosperous if the output is appreciably. lowered. In the last resort the men can only be paid out of the product of the mines. Therefore it is of quite as great importance to the miners as to the owners that a. high rate of production should be maintained. But the miners must go a stop further in their study of economics If they do they will realize that the cause of production, and so of good employment, in the mines is demand, and that they must do nothing which will kill or lower the demand for coal—a demand which, unfortunately for them, is already threatened for various reasons. But an increase in the price of coal is bound to decrease demand, unless, of course, that increase is due to general prosperity throughout the country and not to what we may term artificial causes such as a special increase in the cost of production. There is no economic fallacy which it is more dangerous for the miners to entertain than the fallacy that the demand for any commodity is constant and may not be decreased by considerations of price. People are much too .apt to say that "the country must have coal," and that therefore, even if the price goes up, the demand will not fall off. In truth there are millions of people of whom and thousands of businesses of which it is only true to say that they must have coal if coal is below a particular price. When it gets beyond that price they will either not have coal at all or only have it in much smaller quantities, with the consequent result that less coal will be hewn, and so fewer men employed to hew it. No doubt it is possible to meet this argument by declaring that it may be better for the community to have less coal hewn and that it is a healthier state of things to have few men working at high wages than a larger number working at a somewhat less rate. That might be true if people were prepared to face the crime of placing the unemployed in a lethal chamber, or, again, if there wore plenty of other work for them to do in other trades. Since, however, the problem of the unemployed cannot be settled in this way, there is always the difficulty that either by union levies to support the unemployed or by rates and taxes devoted to poor relief the high wages of the few may be dragged down to the old level—may be nominally rather than really higher. In a word, we are very soon confronted with the principle that it can never be good for the working classes, or, indeed, for anyone, to seek abundance through the pro- duction of artificial scarcity. It is only out of abundant production and by the elimination of economic waste that in the last resort the condition of the Workers can be benefited. The workers will then, if they are wise, keep their eyes fixed on the object of high production, and will view with the utmost jealousy any diminution of production, not only in other trades, but in their own. They will also be wise if they remember the part that capital plays, and must always play, in production. In our industrial system men can only be set to work through the use of capital, and therefore it follows that there can only be a brisk demand for labour if there is a good supply of capital. To destroy capital or to prevent its accumula- tion is the worst possible way in which to benefit labour.