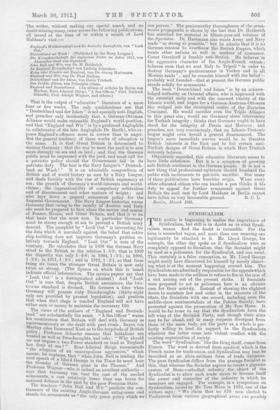 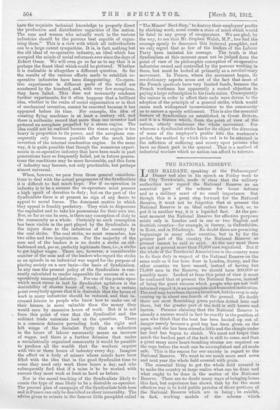 Page 7, 30 March 1912 — SYNDICALISM. T HE public is beginning to realize the importance of
Close

SYNDICALISM. T HE public is beginning to realize the importance of

Syndicalism, but still is in doubt as to what Syndi- calism means. And. the doubt is excusable. For the term is somewhat vague, and. more than one meaning can legitimately be attached to it. Mr. Lloyd, George, for example, the other day spoke as if Syndicalism were so completely opposed to Socialism that the Socialist might be used as a policeman for the Syndicalist, and vice versa. This certainly is a false conception, as Mr. Lloyd George might easily have discovered for himself by merely observ- ing what is at the moment happening around him. The Syndicalists are admittedly responsible for the appeals which have been made to the soldiers to refuse to fire in the case of a riot arising out of the present strike. If Socialists were prepared to act as policemen here is an obvious case for their activity. Instead of showing the slightest desire to maintain law and order in the interests of the State, the Socialists with one accord, including even the middle-class sentimentalists of the Fabian Society, have protested against the prosecution of Mr. Toni Mann. It would be far truer to say that the Syndicalists form the left wing of the Socialist Party, and though their aims may be far ahead, and in many respects divergent from those of the main body, yet the party as a whole is per- fectly willing to lend its support to the Syndicalists wherever the latter come into violent conflict with the existing organization of society. The word" Syndicalism," like the thing itself, comes from France. The word. is derived from synclicat, which is tho French name for trade union, and. Syndicalism may best be described. as an ultra-militant form of trade unionism. The pure Syndicalist differs from the average Socialist in this, that whereas the Socialist aspires to create a gigantic system of State-controlled. industry the object of the Syndicalist is to allow each trade union to become itself the owner and. controller of the industry in which its members are engaged. For example, in a symposium on Syndicalism, issued. by Mr. Tom Mann in 1910, one of the writers says : "We claim that no 670 men elected to Parliament from various geographical areas can possibly have the requisite technical knowledge to properly direct the productive and distributive capacities of the nation. The men and women who actually work in the various industries should be the persons best capable of organ-, izing them." This is a view with which all individualists can to a large extent sympathize. It is, in fact, nothing but the old ideal of co-operative industry, an ideal which has occupied the minds of social reformers ever since the days of Robert Owen. We will even go so far as to say that it is perhaps the finest ideal which could be pictured. Whether it is realizable is altogether a different question. So far the results of the various efforts made to establish co- operative industries have been disappointing. Co-opera- tive experiments in different parts of the world are numbered by the hundred, and, with very few exceptions, they have failed. This does not necessarily condemn further experiments, for it often happens that a brilliant idea, whether in the realm of social organization or in that of mechanical invention, cannot be executed because it has appeared before its time. For example, the idea of creating flying machines is at least a century old, and there is authentic record that more than one inventor had pictured an aeroplane propelled by a steam engine. The idea could not be realized because the steam engine is too heavy in proportion to its power, and the aeroplane con- sequently only became possible after the much later invention of the internal combustion engine. In the same way, it is quite possible that though the numerous experi- ments in co-operative industry that have been made in past generations have so frequently failed, yet in future genera- tions the conditions may be more favourable, and this form of industry may become, not only practicable, but perhaps almost universal.

When, however, we pass from these general considera- tions to deal with the actual programme of the Syndicalists it is difficult to feel much hope. For if co-operation in industry is to be a success the co-operators must possess a high spirit of devotion to duty ; but on the part of the Syndicalists there is at present no sign of any desire to appeal to moral forces. The dominant motive to which they appeal is frankly predatory. They wish to dispossess the capitalist and to take his possessions for their own use. Nor, so far as can be seen, is there any conception of duty to the community as a whole. Certainly no such conception Las been visible in the part played by the Syndicalists in the injury done to the industries of the country by the coal strike. The coal strike, we must remember, has two sides and two inspirations. For the majority of the 311011 and of the leaders it is no doubt a strike on old- fashioned and, per se, perfectly legitimate lines, i.e., a strike to get higher wages. There are, however, a considerable number of the men and of the leaders who regard the strike as an episode in an industrial war waged for the purpose of placing society on a new basis—the basis of Syndicalism. In any case the present policy of the Syndicalists is emi- nently calculated to render impossible the success of a co- operatively managed industry. For one of the points upon which most stress is laid by Syndicalist agitators is the desirability of shorter hours of work. Up to a certain point everybody agrees that it is desirable that the hours of work in many industries should be reduced, and that in- creased leisure to people who know how to make use of their leisure is more valuable than the money. they would earn by excessive hours of work. But it is not e from this point of view that the Syndicalist and the militant trade unionists look at the question. There is a common delusion pervading both the right and left wings of the Socialist Party that a reduction in the hours of labour necessarily means an increase of wages, and there is a further delusion that under a socialistically organized community it would be possible to produce all the wealth that the workers require with two or three hours of industry every day. Imagine the effect on a body of miners whose minds have been filled with the idea that in the good Syndicalist time to come they need only work three hours a day, and who subsequently find that if a mine is to be worked with success they must work at least as hard as before.

Nor is the moral teaching of the Syndicalists likely to create the type of man likely to be a desirable co-operator. The present plan of campaign of the Syndicalists both here and inFra.nce can only be described as sheer immorality. The advice given to miners in the famous little pamphlet called "The Miners' Next Step," to destroy their employers' profits by shirking work, must create a state of mind which would be fatal to any group of co-operators. We are glad, by the way, to see that Mr. Stephen Walsh, M.P., has had the courage openly to denounce this immoral pamphlet, and we only regret that so few of the leaders of the Labour Party have imitated his courage. The truth is that Syndicalism at this moment must not be judged from the point of view of its philosophic conception of co-operative industries owned and controlled by the persons working in them, but must be looked at primarily as a revolutionary movement. In France, where the movement began, its revolutionary aspects arose out of the fact that most of the French syndicate have very limited funds, because the French workman has apparently a rooted objection to paying a large subscription to his trade union. Consequently the unions in order to effect their ends were driven to the adoption of the principle of a general strike, which would cause such widespread inconvenience to the community as to ensure a speedy settlement. This is also the essential feature of Syndicalism as established in Great Britain, and it is a feature which, from the point of view of the nation, utterly condemns the whole movement. For whereas a Syndicalist strike has for its object the diversion of some of the employer's profits into the workmen's pocket, the method by which this end is to be attained is the infliction of suffering and misery upon persons who have no direct part in the quarrel. That is a method of industrial warfare which no nation can afford to tolerate.