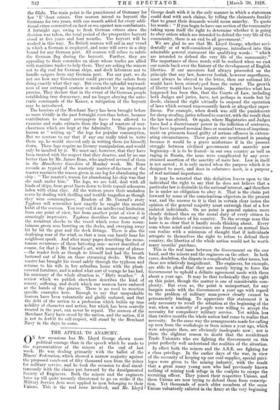 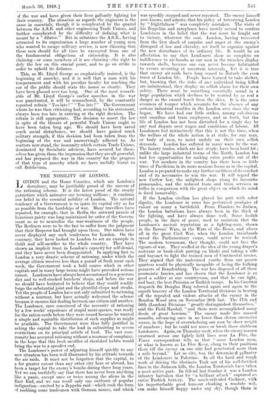 THE APPEAL TO ANARCHY.

ON few occasions has Mr. Lloyd George shown more political courage than in the speech which he made to the representatives of the miners at the end of last week. He was dealing primarily with the ballot of the Miners' Federation, which showed a narrow majority against the proposed comb-out of fifty thousand men from the mines for military service, and he took the occasion to deal simul- taneously with the claims put forward by the Amalgamated Society of Engineers. Both the miners and the engineers have up till quite recently threatened to go on strike if the Military Service Acts were applied to men belonging to their Unions. This is the real issue involved, and Mr. Lloyd George dealt with it in the only manner in which a statesman could deal with such claims, by telling the claimants frankly that to grant their demands would mean anarchy. To quote his words : " If you begin to have one section of the community taking upon itself the right to determine whether it is going to obey orders which are intended to defend the very life of the community, there is an end to all government." We are glad to see that Mr. Lloyd George, whether acci- dentally or of well-considered purpose, introduced into this admirable general statement the qualifying words : " which are intended to defend the very life of the community." The importance of these words will be realized when we cast our minds back over the history of the development of English liberties. If our ancestors had always proceeded on the principle that any law, however foolish, however superfluous, must always be obeyed to the letter, then our national life would have been stereotyped from the outset. The growth of liberty would have been impossible. In practice what has happened has been this, that the Courts of Law, including both Judges and juries, have, not perhaps in words but by deeds, claimed the right virtually to suspend the operation of laws which seemed unnecessarily harsh or altogether super- fluous. For example, when death was still the punishment for sheep-stealing, juries refused to convict, with the result that the law was altered. Or again, where Magistrates and Judges have had a discretionary power in the infliction of sentences, they have imposed nominal fines or nominal terms of imprison- ment on prisoners found guilty of serious offences in extenu- ating circumstances. These points arc mentioned in passing because it would be a grave misfortune if in the present struggle between civilized government and anarchy now beginning—it is to be feared—in our own country as well as raging in Russia, the issue were complicated by any over- strained assertion of the sanctity of mere law. Law in itself is not sacred ; it is only sacred when the purpose which it is designed to meet, and does in substance meet, is a purpose of real national importance.

It may be retorted that this definition leaves open to the individual the right to say that he does not believe that a particular law is desirable in the national interest, and therefore he is under no obligation to obey it. That is the claim put forward by some of the conscientious objectors in the present war, and the answer to it is that in certain clear issues the opinion of the general majority must outweigh that of a few isolated individuals. On no point is general opinion more clearly defined than on the moral duty of every citizen to help in the defence of his country. To the average man this issue is so clear that it hardly needs thinking about. Every man whose mind and conscience are framed on normal lines can realize with a minimum of thought that if individuals arrogate to themselves the right to refuse to defend their country, the liberties of the whole nation would not be worth many months' purchase.

This is the real issue between the Government on the one hand, and the miners and the engineers on the other. In both cases, doubtless, the dispute is complicated by other issues, but these are relatively insignificant. The engineers, for example, are able to plead that they are merely trying to force the Government to uphold a definite agreement made with them about a year ago. It may be that technically they are right on this point, though the matter is one of considerable com- plexity. But even so, the point is unimportant, for any bargain made with the Government a year ago with regard to the problem of military man-power clearly cannot be permanently binding. To appreciate this statement it is only necessary to recall the situation at the beginning of the war, when a minority of people were willing to accept the necessity for compulsory military service. Yet within less than twelve months the whole nation had come to realize that necessity. In the same way the arrangements made for calling up men from the workshops or from mines a year ago, which were adequate then, arc obviously inadequate now ; nor is there the slightest reason to doubt that the recalcitrant Trade Unionists who are fighting the Government on this point perfectly well understand the realities of the situation. In effect both the miners and the A.S.E. are fighting for a class privilege. In the earlier days of the war, in view of the necessity of keeping up our coal supplies, special privi- leges were given to the mining industry, with the result that a great many young men who had previously known nothing of mining took refuge in the coalpits to escape the recruiting officer. They joined their respective Unions, and these Unions are now trying to defend them from conscrip- tion. Yet thousands of much older members of the same Unions voluntarily enlisted in the Army at the very beginning A the war and have given their lives gallantly fighting for their country. The situation as regards the engineers is the same in essentials, though it is complicated by the quarrel between the A.S.E. and other engineering Trade Unions, and further complicated by the difficulty of defining what is meant by a " dilutee." But in substance the A.S.E., having attracted to its organization a large number of young men who wanted to escape military service, is now claiming that these men should for all time be exempted from one of the fundamental obligations of citizenship. It is also claiming—or some members of it are claiming—the right to defy the law on this crucial point, and to go on strike in order to uphold its defiance.

This, as Mr. Lloyd George so emphatically insisted, is the beginning of anarchy, and it is well that a man with his temperament and with his peculiar faculty for reaching the ear of the public should state the issues so clearly. They have been glossed over too long. One of the most remark- able of Mr. Lloyd George's earlier speeches in the war was punctuated, it will be remembered, by the constantly repeated refrain " Too late ! " " Too late ! " The Government whom he was then criticizing had, according to his statement, always been too late in arriving at the right decision. The refrain is still appropriate. The decision to assert the law in spite of the threats of powerful Trade Unions ought to have been taken long ago. We should have been saved much social disturbance, we should have gained much military strength, if this decision had been taken from the beginning of the war and unswervingly adhered to. As matters now stand, the immunity which certain Trade Unions, dominated by Socialistic advisers, have secured for them- selves has given them the impression that they are all-powerful, and has prepared the way in this country for the progress of that type of anarchy which we have usefully learnt to call Bolshevism.