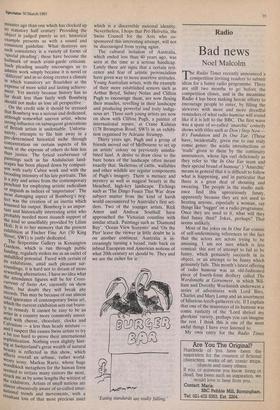 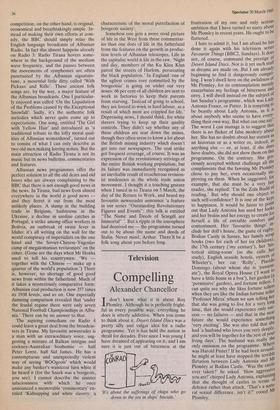 The Radio Times recently announced a competition inviting readers to submit ideas for a funny radio programme. There are still two months to go before the competition closes, and in the meantime Radio 4 has been making heroic efforts to encourage people to enter, by filling the airwaves with more and more dreadful reminders of what radio humour will sound like if it is left to the BBC. The first wave was a spate of so-called 'anarchic' comedy shows with titles such as Don't Stop Now — It's Fundation and In One Ear. (These have, incidentally, given rise to one truly comic genre: the acidic introductions or 'trails' given to them by the continuity announcers, whose lips curl deliciously as they refer to 'the In One Ear team and their special brand of humour'.) 'Anarchic' means in general that it is difficult to follow what is happening, and in particular that there is a great deal of shouting and swearing. The people in the studio audi- ence find this uproariously funny, apparently because they are not used to hearing anyone, especially a woman, say things like 'bugger' on a radio programme. Once they are used to it, what will they find funny then? Jokes, perhaps? That seems unlikely. Most of the jokes on In One Ear consist of self-undermining references to the fact that the actors are actors trying to be amusing. I am not sure which is less comical: this sort of attempt to fail to be funny, which genuinely succeeds in its object, or an attempt to be funny which genuinely fails. This month's latest offering of radio humour was an. old-fashioned piece of fourth-form drollery called The Wordsmiths at Gorsemere, in which Wil- liam and Dorothy Wordsmith underwent a series of adventures with Lord Biro, Charles and Mary Lump and an assortment of hilarious leech-gatherers etc. If! explain that one of the mainstays of its humour was comic rusticity of the 'Lord shrivel my gherkins' variety, perhaps you can imagine the rest. I think this is one of the most awful things I have ever listened to. My own entry for the Radio Times competition, on the other hand, is original, economical and breathtakingly simple. In- stead of making their own efforts at com- edy, the BBC should simply relay the English language broadcasts of Albanian Radio. In fact this almost happens already on Radio 3: Radio Tirana hovers some- where in the background of the medium wave frequency, and the pauses between the movements of symphonies are often punctuated by the Albanian signature- tune, a mournful little ditty called 'With Pickaxe and Rifle'. These ancient folk songs are, by the way, a major feature of the Albanian broadcasts. One I particular- ly enjoyed was called 'On the Liquidation of the Problems caused by the Exceptional Snowfall'. Sadly, it's the authentic folk melodies which never quite come up to expectations. One song, entitled 'The Girl with Yellow Hair' and introduced as 'a traditional tribute to the lofty moral qual- ities of Albanian womanhood', turned out to consist of what I can only describe as two old men making leering noises. But the main attraction of Radio Tirana is not its music but its news bulletins, commentaries and features.

Albanian news programmes offer the perfect solution to all the old dears and old bores who are always complaining to the BBC that there is not enough good news in the news. In Tirana, bad news from almost everywhere in the world is good news — and they ferret it out from the most unlikely places. A slump in the building trade in Belgium, hailstorms in the Ukraine, a decline in sardine catches in Portugal, a strike among office workers in Bolivia, an outbreak of swine fever in Idaho: it's all writing on the wall for the world conspiracy of imperialists on the one hand and 'the Soviet-Chinese-Yugoslav camp of megalomanian revisionists' on the other. (Gone are the days when Mr Hoxha used to tell his countrymen: 'We — together with the Chinese — make up a quarter of the world's population.') There is, however, no shortage of good good news from within the fatherland. Much of it takes a mysteriously comparative form: Albanian coal production is now 357 times its 1938 levels, and so on. One especially damning comparison revealed that 'under the feudal regime there were only seven National Football Championships in Alba- nia.' There can be no answer to that.

The aspiring comedians on Radio 4 could learn a great deal from the broadcas- ters in Tirana. My favourite newsreader is a man with an extraordinary voice, sug- gesting a mixture of Balkan intrigue and cockney-Australian bonhomie — half Peter Lorre, half Sid James. He has a contemptuous and unexpectedly violent way of saying 'BOOgeois' which would make any banker's waistcoat turn white if he heard it (for the Snark was a boogeois, you see). I cannot describe the sinister salaciousness with which he once announced a memorable `commentary' en- titled 'Kidnapping and white slavery: a characteristic of the moral putrefaction of boogeois society'.

Somehow one gets a more vivid picture of life in the West from these commentar- ies than one does of life in the fatherland from the features on the growth in produc- tion levels of Albanian telescopes. Life in the capitalist world is life in the raw. 'Night and day, members of the Ku Klux Klan patrol the streets of Harlem, persecuting the black population.' In England `one of the ugliest crimes ever committed by the boogeoisie' is going on under our very noses: 66 per cent of all children are sent to work in factories to keep their parents from starving. 'Instead of going to school, they are forced to work in hard labour, as a result of which most are crippled for life.' Depressing news, I should think, for white slavers trying to keep up their quality controls. They didn't say whether any of these children are sent down the mines, though they often seem to know a lot about the British mining industry which doesn't get into our newspapers. The coal strike got frequent coverage, of course. It was an expression of the revolutionary strivings of the entire British working population; but its failure was immediately recognised as an inevitable result of treacherous revision- ist tendencies in the whole trade union movement. I thought it a touching gesture when I tuned in to Tirana on 5 March, the day of the Return to Work, and heard my favourite newsreader announce 'a feature in our series "Outstanding Revolutionary Figures and Events": this talk is entitled "The Name and Deeds of Scargill are Immortal" '. But a ripple in the ionosphere had deceived me — the programme turned out to be about the name and deeds of Stalin. Never mind, Arthur. There'll be a folk song about you before long.