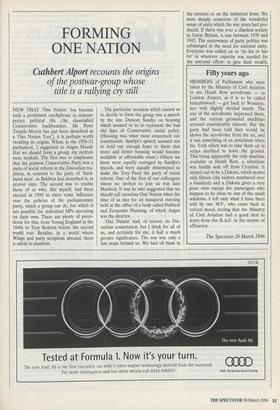 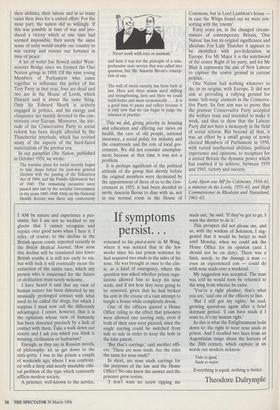 of the postwar-group whose title is a rallying cry still

NOW THAT 'One Nation' has become such a prominent catchphrase in contem- porary political life (the dissatisfied Conservative backbencher, Mr Peter Temple-Morris has just been described as a 'One Nation Tory'), it is perhaps worth recalling its origins. When, in the 1950-51 parliament, I suggested to Angus Maude that we should form a group, my motives were twofold. The first was to emphasise that the postwar Conservative Party was a party of social reform in the Disraelian tra- dition, in contrast to the party of 'hard- faced men', as Baldwin had described it, in prewar days. The second was to enable those of us who, like myself, had been elected in 1950 to exert some influence over the policies of the parliamentary party, which a group can do, but which is not possible for individual MPs operating on their own. There are plenty of prece- dents for this, from Young England in the 1840s to Tory Reform before the second world war. Besides, in a world where Whips and party scorpions abound, there is safety in numbers. The particular occasion which caused us to decide to form the group was a speech by the late Duncan Sandys on housing which seemed to us to represent the bad old days of Conservative social policy. (Housing was what most concerned our constituents. Sandys's speech seemed not to hold out enough hope to them that more and better housing would become available at affordable rents.) Others we knew were equally outraged by Sandys's speech, and were equally determined to make the Tory Party the party of social reform. One of the first of our colleagues whom we invited to join us was lain Macleod. It was he who suggested that we should call ourselves One Nation when the nine of us met for an inaugural meeting held at the office of a body called Political and Economic Planning, of which Angus was the director.

'One Nation' had, of course, its Dis- raelian connotation, but I think for all of us, and certainly for me, it had a much greater significance. The war was only a few years behind us. We had all been in the services or on the industrial front. We were deeply conscious of the wonderful sense of unity which the war years had pro- duced. If there was ever a classless society in Great Britain, it was between 1939 and 1945. The narrowness of party politics was submerged in the need for national unity. Everyone was called on to 'do his or her bit' in whatever capacity was needed for the national effort: to give their wealth, their abilities, their labour and in so many cases their lives for a united effort. For the most part, the nation did so willingly. If this was possible in time of war and pro- duced a victory which at one time had seemed impossible, then surely the same sense of unity would enable our country to win victory and restore our fortunes in time of peace.

A lot of water has flowed under West- minster Bridge since we formed the One Nation group in 1950. Of the nine young Members of Parliament who came together to influence the policy of the Tory Party in that year, four are dead and two are in the House of Lords, which Disraeli said is about the same thing. Only Sir Edward Heath is actively engaged in politics, and his energy and eloquence are mainly devoted to the con- troversy over Europe. Moreover, the atti- tude of the Conservative Party to social reform has been deeply affected by the Thatcherite interlude, which has revived many of the aspects of the hard-faced materialism of the prewar era.

In our pamphlet One Nation, published in October 1950, we wrote:

The wartime plans for social security began to take shape before the post-war general election with the passing of the Education Act of 1944, and the Family Allowances Act of 1945. The remaining measures were passed into law by the socialist Government in the years 1945-1948. Only on the National Health Service was there any controversy

'Never work with toys or animals.'

and here it was not the principle of a com- prehensive state service that was called into question, but Mr Aneurin Bevan's concep- tion of one.

The wall of social security has been built at last. Here and there stones need shifting and strengthening, here and there we could build better and more economically. ... It is a good time to pause and reflect because it is only now that we can begin to judge the schemes in practice.

This we did, giving priority to housing and education and offering our views on health, the care of old people, national insurance, a social policy for industry and the countryside and the role of local gov- ernment. We did not consider unemploy- ment because at that time it was not a problem.

It is perhaps significant of the political attitude of the group that shortly before the original members were decimated by the appointment of three of us to the Gov- ernment in 1955, it had been decided to invite Aneurin Bevan to dine with us, not in our normal room in the House of Commons, but in Lord Lambton's house — in case the Whips found out we were con- sorting with the 'enemy'.

Forty years on, in the changed circum- stances of contemporary Britain, 'One Nation' has lost its original significance and idealism. For Lady Thatcher it appears to be identified with pro-federation in Europe. For Mr Major it is the watchword of the centre Right of his party, and for Mr Blair it represents the aim of New Labour to capture the centre ground in current politics.

One Nation had nothing whatever to do, in its origins, with Europe. It did not aim at providing a rallying ground for some 'left-wing' element in the Conserva- tive Party. Its first aim was to prove that the postwar Conservative Party accepted the welfare state and intended to make it work, and thus to show that the Labour Party did not have a monopoly in the field of social reform. But beyond all that, it was an effort by a small group of newly elected Members of Parliament in 1950, with varied intellectual abilities, political experience and opinions, to recapture for a united Britain the dynamic power which has enabled it to achieve, between 1939 and 1945, victory and success.