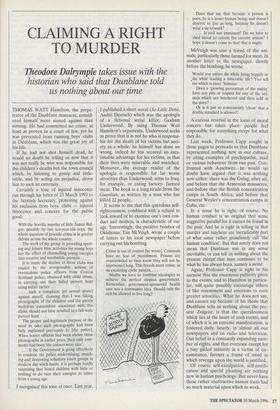 CLAIMING A RIGHT TO MURDER

Theodore Dalrymple takes issue with the

historian who said that Dunblane told us nothing about our time

THOMAS WATT Hamilton, the perpe- trator of the Dunblane massacre, consid- ered himself more sinned against than sinning. He had committed no crime, at least as proven in a court of law, yet he was prevented from running boys' clubs in Dunblane, which was the great joy of his life.

If he had not shot himself dead, he would no doubt be telling us now that it was not really he who was responsible for the children's deaths but the town council which, by listening to gossip and tittle- tattle, and by acting on prejudice, drove him to such an extremity.

With the horrific murder of little James Bul- ger, possibly by two ten-year-old boys, the whole question of juvenile crime is in greater debate across the whole country.

The work of my group in providing sport- ing and leisure time activities for young boys has the effect of channelling young energies into creative and worthwhile pursuits. . .

It is ironic the decline of these clubs was caused by the irresponsible actions of overzealous police officers from Central Scotland police, obsessed with child abuse, in carrying out their failed pervert hunt using unfair tactics. . . . . . such a complaint [of sexual abuse] against myself, claiming that I was taking photographs of the children and the purely malicious innuendoes associated with this claim, should not have resulted in a full-scale pervert hunt.. . . The proper and legitimate purpose of the need to take such photographs had been fully explained previously to [the police]. When senior officers had been shown these photographs in earlier years, their only com- ments had been 'the colours were nice'.

. . . If the Government is going effectively to condone the police undermining, smash- ing and destroying voluntary youth groups in modern day witch-hunts, it is perhaps hardly surprising that bored children with little or nothing to do turn their energies to crime from a young age.

I recognised this tone at once. Last year, I published a short novel (So Little Done, Andre Deutsch) which was the apologia of a fictional serial killer, Graham Underwood. By using Thomas Watt Hamilton's arguments, Underwood seeks to prove that it is not he who is responsi- ble for the death of his victims but soci- ety as a whole; he himself has done no wrong, indeed he has secured an ines- timable advantage for his victims, in that their lives were miserable and wretched. Moreover, the average reader of the apologia is responsible for far worse atrocities than Underwood: arms to Iraq, for example, or eating factory- farmed meat. The book is a long tirade from the Guardian, as written by a man who has killed 22 people.

It seems to me that this querulous self- righteousness, combined with a refusal to look inward or to examine one's own con- duct and motives, is characteristic of our age. Interestingly, the putative bomber of Oklahoma, Tim McVeigh, wrote a couple of letters to his local newspaper before carrying out his bombing.

Crime is out of control [he wrote]. Criminals have no fear of punishment. Prisons are overcrowded so they know they will not be imprisoned long. This breeds more crime, in an escalating cyclic pattern...

Maybe we have to combine ideologies to achieve the perfect utopian government. Remember, government-sponsored health care was a communist idea. Should only the rich be allowed to live long? Does that say that because a person is poor, he is a lesser human being; and doesn't deserve to live as long, because he doesn't wear a tie to work?

. . . Is civil war imminent? Do we have to shed blood to reform the current system? I hope it doesn't come to that! But it might.

McVeigh was also a friend of the ani- mals, particularly those farmed for meat. In another letter to the newspaper, shortly before the bombing, he wrote:

Would you rather die while living happily or ,die while leading a miserable life? You tell me which is more 'humane'.

Does a 'growing percentage of the public' have any pity or respect for any of the ani- mals which are butchered and then sold in the store?

Or is it just so conveniently 'clean' that a double standard is allowed?

A curious reversal in the locus of moral concern has taken place: people feel responsible for everything except for what they do.

In a sense he is right, of course. No human conduct is so original that some suggestive parallel for it cannot be found in the past. And he is right in telling us that murder and mayhem are ineradicably part of what some rather grandiosely call 'the human condition'. But that surely does not mean that Dunblane was in any sense inevitable, or can tell us nothing about the present except that man continues to be what he has always been, namely a swine.

Again, Professor Capp is right in his surmise that the enormous publicity given to the events, and to Hamilton in particu- lar, will quite possibly encourage others of like resentment and emotions to even greater atrocities. What he does not say, and cannot say because of his thesis that Dunblane tells us nothing about the pre- sent Zeitgeist, is that the querulousness which lies at the heart of such events, and of which it is an extreme manifestation, is fostered daily, hourly, in almost all our newspapers and on radio and television. Our belief in a constantly expanding num- ber of rights, and that everyone except for a tiny gilded minority is a victim of cir- cumstance, favours a frame of mind in which revenge upon the world is justified.

Of course self-exculpation, self-justifi- cation and special pleading are nothing new in human psychology. But never have these rather unattractive human traits had so much material upon which to work.