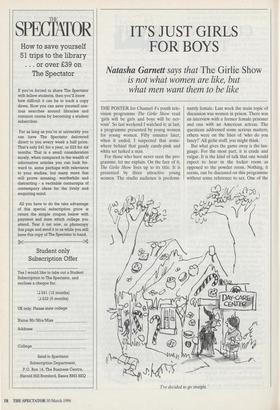 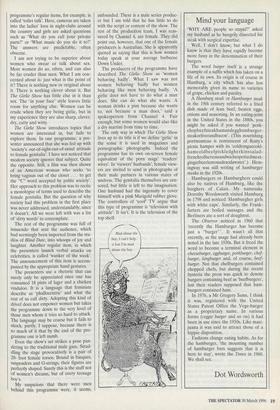 IT'S JUST GIRLS FOR BOYS

Natasha Garnett says that The Girlie Show is not what women are like, but what men want them to be like

THE POSTER for Channel 4's youth tele- vision programme The Girlie Show read 'girls will be girls and boys will be ner- vous'. So last weekend I watched it; at last, a programme presented by young women for young women. Fifty minutes later, when it ended, I suspected that some- where behind that gaudy candy-pink and white set lurked a man.

For those who have never seen the pro- gramme, let me explain. On the face of it, The Girlie Show lives up to its title. It is presented by three attractive young women. The studio audience is predomi- nantly female. Last week the main topic of discussion was women in prison. There was an interview with a former female prisoner and one with an American actress. The questions addressed some serious matters; others were on the lines of 'who do you fancy?' All girlie stuff, you might think.

But what gives the game away is the lan- guage. For the most part, it is crude and vulgar. It is the kind of talk that one would expect to hear in the locker room as opposed to the powder room. Nothing, it seems, can be discussed on this programme without some reference to sex. One of the 'I've decided to go straight.' programme's regular items, for example, is called 'toilet talk'. Here, cameras are taken into the ladies' loos in night-clubs around the country and girls are asked questions such as 'What do you call your private parts?' or 'What music do you do it to?' The answers are predictable, often obscene.

I am not trying to be superior about women who swear or talk about sex. Most women do so, often, and can also be far cruder than men. What I am con- cerned about is: just what is the point of it? There is nothing new or original about it. There is nothing clever about it. But The Girlie Show has little else in it than sex. The 'in your face' style leaves little room for anything else. Women can be crude when they are being girlie, but in my experience they are also sharp, clever, dry, catty and witty.

The Girlie Show introduces topics that women are interested in, but fails to explore them. In one programme, a pre- senter announced that she was fed up with 'society's out-of-sight-out-of-mind attitude to female genitalia'. I have not noticed that modern society ignores that subject. Quite the opposite. Still, a film was then shown of an American woman who seeks 'to bring vaginas out of the closet . . . to get the "C" word accepted by polite society'. Her approach to this problem was to recite a monologue of terms used to describe the female genitalia. But the question of why society had this problem in the first place was never addressed, understandably, since it doesn't. All we were left with was a list of 'dirty words' to contemplate.

The rest of the programme was full of innuendo that sent the audience, which had seemingly been imported from the stu- dios of Blind Date, into whoops of joy and laughter. Another regular item, in which the presenters launch verbal attacks on celebrities, is called `wanker of the week'. The announcement of this item is accom- panied by the appropriate hand gestures.

The presenters use a rhetoric that can surely only be appreciated once one has consumed 18 pints of lager and a chicken vindaloo. It is a language that feminists describe as `phallocentric' and what the rest of us call dirty. Adopting this kind of drivel does not empower women but takes the programme down to the very level of those men whom it tries so hard to attack. The language may be coarse but it fails to shock, partly, I suppose, because there is so much of it that by the end of the pro- gramme one is left numb.

Even the show's set strikes a pose pan- dering to the traditional male gaze. Strad- dling the stage provocatively is a pair of 20- foot female torsos. Bound in basques, suspenders and G-strings, their figures are perfectly shaped. Surely this is the stuff not of women's dreams, but of every teenage boy's.

My suspicions that there were men behind this programme were, it seems. unfounded. There is a male series produc- er but I am told that he has little to do with the script or content of the show. The rest of the production team, I was reas- sured by Channel 4, are female. They did point out, however, that one of the female producers is Australian. She is apparently quoted as saying that this is how women today speak at your average barbecue Down Under.

The only way in which The Girlie Show lives up to its title is if we define 'girlie' in the sense it is used in magazines and pornographic photographs. Indeed the programme has its own on-screen female equivalent of the porn mags"readers' wives'. In 'viewers' husbands', female view- ers are invited to send in photographs of their male partners in various states of undress. The genitalia themselves are cen- sored, but little is left to the imagination. One husband had the ingenuity to cover himself with a pink Marigold rubber glove. The controllers of `yoof TV argue that this type of programme is 'television with attitude'. It isn't. It is the television of the top shelf.