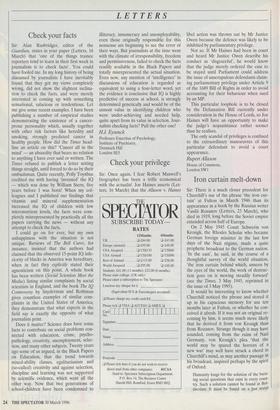 Sir: Once again, I fear Robert Maxwell's biographer has been a trifle economical with the actualite. Joe Haines asserts (Let- ters, 16 March) that the Allason v. Haines libel action was thrown out by Mr Justice Owen because the defence was likely to be inhibited by parliamentary privilege.

Not so. If Mr Haines had been in court and heard Mr Justice Owen describe his conduct as 'disgraceful', he would know that the judge merely ordered the case to be stayed until Parliament could address the issue of unscrupulous defendants claim- ing parliamentary privilege under Article 9 of the 1689 Bill of Rights in order to avoid accounting for their behaviour when sued by an MP.

This particular loophole is to be closed by the Defamation Bill currently under consideration in the House of Lords, so Joe Haines will have an opportunity to make the judge's acquaintance rather sooner than he realises.

The only scandal of privileges is confined to the extraordinary manoeuvres of this particular defendant to avoid a court appearance.