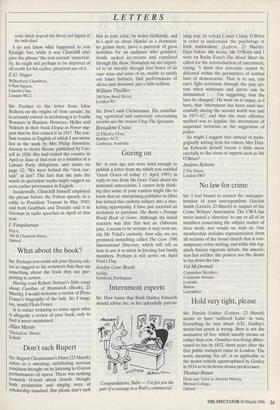 Sir: Further to the letter from Irfon Roberts on the

origins of 'iron curtain', he is certainly correct in attributing it to Vasilii Rozanov in Russian. However, Heller and Nekrich in their book Utopia in Power sug- gest that he first coined it in 1917. The ear- liest version in English of which I am aware lies in the work by Mrs Philip Snowden, Journey to Soviet Russia, published by Cas- sell in 1920. She had visited the country in April to June of that year as a member of a Labour Party delegation, and states on page 32: 'We were behind the "iron cur- tain" at last!' The fact that she puts the words in quotation marks might suggest an even earlier provenance in English.

Incidentally, Churchill himself employed the phrase before the Fulton speech, in a cable to President Truman in May 1945, and both Goebbels and Doenitz said it in German in radio speeches in April of that year.