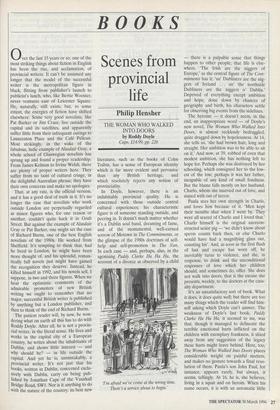 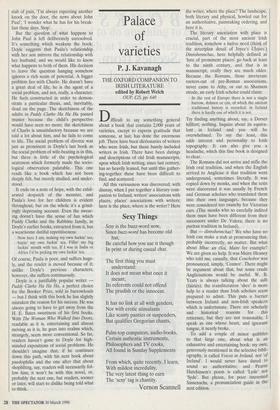 THE WOMAN WHO WALKED INTO DOORS by Roddy Doyle Cape, £14.99, pp. 226 0 ver the last 15 years or so, one of the most striking things about fiction in English has been the rise, and acclamation, of provincial writers. It can't be assumed any longer that the model of the successful writer is the metropolitan figure in black, flitting from publisher's launch to publicist's lunch, who, like Bertie Wooster, never ventures east of Leicester Square. He, naturally, still exists, but, to some extent, the energies of fiction have shifted elsewhere. Some very good novelists, like Pat Barker or Jim Crace, live outside the capital and its satellites, and apparently suffer little from their infrequent outings to Launceston Place and the Café Pelican. Most strikingly, in the wake of the fabulous, ludic example of Alasdair Gray, a whole school of Glaswegian novelists has sprung up and found a proper readership. From James Kelman to Irvine Welsh, there are plenty of proper writers here. They suffer from no taint of cultural cringe, in the delightful Australian phrase; they have their own concerns and make no apologies.

That, at any rate, is the official version, and it has a good deal of truth in it. It's no longer the case that novelists who work outside London are perpetually regarded as minor figures who, for one reason or another, couldn't quite hack it in Grub Street. But against the example of Alasdair Gray or Pat Barker, one might set the case of Richard Burns, one of the best English novelists of the 1980s. He worked from Sheffield. It's tempting to think that, had he lived in London, he might have been more thought of, and his splendid, roman- tically full novels just might have gained the recognition they deserve. Instead, he killed himself in 1992, and his novels sell, I suppose, in two and three figures. When we hear the optimistic comments of the admirable promoters of new British writing we ought to remember that no major, successful British writer is published by anything but a London publisher, and then to think of the end of Richard Burns.

The patient reader will, by now, be won- dering what on earth all this has to do with Roddy Doyle. After all, he is not a provin- cial writer, in the literal sense. He lives and works in the capital city of a European country, he writes about the inhabitants of Dublin, and shows little interest — and why should he? — in life outside the capital. And yet he is, unmistakably, a provincial writer. It's not just that his books, written in Dublin, concerned exclu- sively with Dublin, carry on being pub- lished by Jonathan Cape of the Vauxhall Bridge Road, SW1. Nor is it anything to do With the nature of the country; its best new literature, such as the books of Colm Toibin, has a sense of European identity which is far more evident and pervasive than any British heritage, and which resolutely rejects any notion of provinciality.

In Doyle, however, there is an indubitably provincial quality. He is concerned with those outside central cultural experiences; his characteristic figure is of someone standing outside, and peering in. It doesn't much matter whether it's a Dublin soul band, dreaming of fame, and of the monumental, well-earned sorrow of Motown in The Commitments, or the glimpse of the 1980s doctrines of self- help and self-promotion in The Van. In each case — and, perhaps, also, in the agonising Paddy Clarke Ha Ha Ha, the account of a divorce as observed by a child 'I'm afraid we've come at the wrong time. There's a service about to begin.' — there is a palpable sense that things happen to other people; that life is else- where. 'The Irish are the niggers of Europe,' as the central figure of The Com- mitments has it; 'an' Dubliners are the nig- gers of Ireland . . . an' the northside Dubliners are the niggers o' Dublin.' Deprived of everything except ambition and hope, done down by chances of geography and birth, his characters settle for observing big events from the sidelines.

The heroine — it doesn't seem, in the end, an inappropriate word — of Doyle's new novel, The Woman Who Walked Into Doors, is almost recklessly bedraggled, quite dragged down by hopelessness. At 14, she tells us, 'she had brown hair, long and straight. Her ambition was to be able to sit on it.' And now, at 39, robbed of even that modest ambition, she has nothing left to hope for. Perhaps she was destroyed by her schooling, which consigned her to the low- est of the low; perhaps it was her father, incapable of any kind of small fondness. But the blame falls mostly on her husband, Charlo, whom she married out of love, and stayed with out of terror.

Paula sees her own strength in Charlo, and loves him because of it. 'Men kept their mouths shut when I went by. They were all scared of Charlo and I loved that.' Charlo himself is the original unrecon- structed sexist pig — 'we didn't know about sperm counts back then, or else Charlo would have had a magnifying glass out, counting his'. And, as soon as the first flush of lust and escape has worn off, he inevitably turns to violence, and she, in response, to drink and the unconditional responses of love which her children should, and sometimes do, offer. She does not walk into doors, that is the excuse she presents, weekly, to the doctors at the casu- alty department.

It's an unsatisfactory sort of book. What it does, it does quite well; but there are too many things which the reader will find him- self asking which Doyle can't answer. The weakness of Doyle's last book, Paddy Clarke Ha Ha Ha, it seemed to me, was that, though it managed to delineate the terrible emotional hurts inflicted on the children with exemplary frankness, it shied away from any suggestion of the legacy these hurts might leave behind. Here, too, The Woman Who Walked Into Doors places considerable weight on painful matters, and makes no gesture towards a final reso- lution of them. Paula's son John Paul, for instance, appears rarely, but always, it seems, tellingly. At 16, he is, she believes, living in a squat and on heroin. When his name occurs, it is with an automatic little stab of pain, `I'm always expecting another knock on the door, the news about John Paul'; 'I wonder what he has for his break- fast these days. Stop'.

But the question of what happens to John Paul is left deliberately unresolved. It's something which weakens the book; Doyle suggests that Paula's relationship with her son mirrors the relationship with her husband, and we would like to know what happens to both of them. His decision to leave the question hanging somehow ignores a rich seam of potential. A bigger problem lies with Charlo. He doesn't have a great deal of life, he is the agent of a social problem, and not, really, a character. He feels constructed in order to demon- strate a particular thesis, and, inevitably, dead on the page. The sketchiness of the adults in Paddy Clarke Ha Ha Ha passed muster because the child's perspective would have seen no more; the sketchiness of Charlo is unsatisfactory because we are told a lot about him, and he fails to come to life. The social problem of divorce was just as prominent in Doyle's last book as the social problem of wife-beating is in this, but there is little of the psychological acuteness which formerly made the socio- logical observation palatable. This one reads like a book which has not been deeply felt, but merely studied, and under- stood.

It ends on a note of hope, with the exhil- arated despatch of the monster, and Paula's love for her children is evident throughout, but on the whole it's a grind- ingly depressing account. Even the swear- ing doesn't have the sense of fun which Paddy Clarke and the Rabbitte family, in Doyle's earlier books, extracted from it, but a wearisome dutiful repetitiveness:

Of course, Paula is poor, and suffers huge- ly, and the reader is moved because of it; unlike Doyle's previous characters, however, she suffers continuously.

Doyle is a justifiably popular writer — Paddy Clarke Ha Ha Ha, a perfect choice for the Booker Prize, sold in barrowloads — but I think with this book he has slightly mistaken the reason for his success. He was always going to have to get away from the H. E. Bates sweetness of his first books. With The Woman Who Walked Into Doors, readable as it is, entertaining and almost moving as it is, he goes into realms which, strangely, seem more conventional. So far, readers haven't gone to Doyle for high- minded expositions of social problems. He shouldn't imagine that, if he continues down this path, with his next book about paedophilia and the one after that about shoplifting, say, readers will necessarily fol- low him; it won't be with this novel, or, probably the next one, but readers, sooner or later, will start to dislike being told what to think.