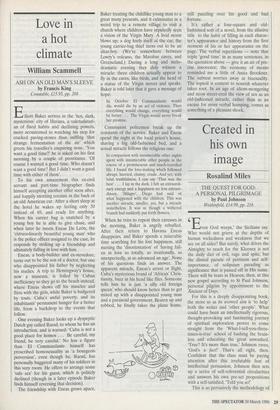 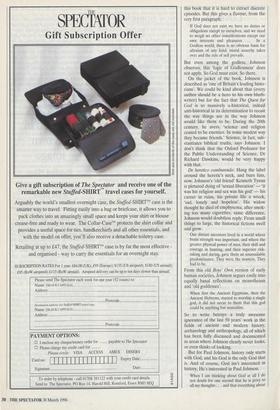 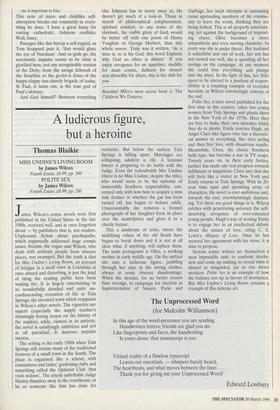 Created in his own image

THE QUEST FOR GOD: A PERSONAL PILGRIMAGE by Paul Johnson Weidenfeld, £14.99, pp. 216 Even God weeps,' the Sicilians say. Who would not grieve at the depths of human wickedness and weakness that we see on all sides? But surely, what drives the Almighty to reach for the Kleenex is not the daily diet of evil, rage and spite, but the dismal parade of pettiness and self- importance, of solipsism parading as significance that is passed off in His name. There will be tears in Heaven, then, at this new gospel according to St Paul Johnson, personal pilgrim by appointment to the Ancient of Days.

For this is a deeply disappointing book, the more so as its avowed aim is `to help' both the writer and 'other people'. What could have been an intellectually rigorous, thought-provoking and fascinating journey of spiritual exploration proves to come straight from the 'What-I-tell-you-three- times-is-true' school of bashing the brain- less and educating the great unwashed. 'True? It's more than true,' Johnson raves, 'God's a fact!' That's all right, then. Confident that the class must be paying attention after this irrefutable feat of intellectual persuasion, Johnson then sets up a series of self-referential circularities and answers his own pre-set propositions with a self-satisfied, 'Told you so!'

This is so pervasively the methodology of this book that it is hard to extract discrete episodes. But this gives a flavour, from the very first paragraph:

If God does not exist we have no duties or obligations except to ourselves, and we need to weigh no other considerations except our own interests and pleasures . . . In a Godless world, there is no obvious basis for altruism of any kind, moral anarchy takes over and the rule of self prevails.

But even among the godless, Johnson observes, this 'logic of Godlessness' does not apply. So God must exist. So there.

On the jacket of the book, Johnson is described as 'one of Britain's leading histo- rians'. We could be kind about that (every author should be a hero to his own blurb- writer) but for the fact that The Quest for God is so massively a-historical, indeed anti-historical in its determination to recast the way things are in the way Johnson would like them to be. During the 20th century, he avers, 'science and religion ceased to be enemies. In some modest way they became friends.' Science, in fact, sub- stantiates biblical truths, says Johnson. I don't think that the Oxford Professor for the Public Understanding of Science, Dr Richard Dawkins, would be very happy with that.

De heretico comburendo. Hang the label around the heretic's neck, and burn him, now. Johnson's 'old friend' Kenneth Tynan is pictured dying of 'sexual liberation' — 'it was his religion and sex was his god' — his career in ruins, his private life a wreck, 'sad, lonely and hopeless'. His widow thought he died of emphysema, after smok- ing too many cigarettes; same difference, Johnson would doubtless reply. From small things to large, the historical fictions swell and grow.

Our distant ancestors lived in a world where brute strength was important, and where the greater physical power of men, their skill and courage in hunting, and their superior risk- taking and daring, gave them an unassailable predominance. They were the masters. They had to be.

From this old Boys' Own version of early human societies, Johnson segues easily into equally banal reflections on monotheism and 'old goddesses':

When first the Ancient Egyptians, then the Ancient Hebrews, started to worship a single god, it did not occur to them that this god could be anything but masculine.

So to write betrays a truly awesome ignorance of the last 50 years' work in the fields of ancient and modern history, archaeology and anthropology, all of which has been fully discussed and documented in areas where Johnson clearly never looks, or even thinks of looking.

When I am thinking about God at all I do not doubt for one second that he is privy to all my thoughts . . . and that everything about

me is important to him.

This note of naive and childlike self- absorption breaks out constantly in every- thing he does. 'I have a great fancy for visiting cathedrals', Johnson confides. Well, fancy.

Passages like this betray a self-regard, as Tom Stoppard puts it, 'that would glaze the eye of Narcissus'. And as gods go, the narcissistic impulse seems to be what is glorified here, not any recognisable version of the Deity, from the savage Jehovah of the Israelites to the go-for-it Jesus of the happy-clappy low-church brigade of today. St Paul, it turns out, is the true god of Paul's idolatry.

And God himself? Between everything else Johnson has to worry away at, He doesn't get much of a look-in. Those in search of philosophical enlightenment, spiritual comfort, or any sense of the shekinah, the visible glory of God, would be better off with one poem of Henry Vaughan or George Herbert, than this whole oeuvre. Truly was it written, 'As a man is, so is his God: this word/ Explains why God so often is absurd.' If you enjoy arrogance for an appetiser, muddle for main course, dullness for dessert and absurdity for afters, this is the dish for you.

Rosalind Miles's most recent book is The Children We Deserve.