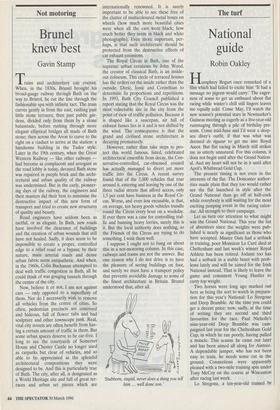 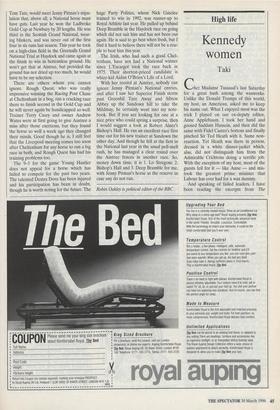 The present timing is not even in the interests of the flat. The Doncaster author- ities made plain that they too would rather see the flat launched in style after the Grand National than go off at half-cock while everybody is still waiting for the most exciting jumping event in the racing calen- dar. All strength to their campaign.

Let us turn our attention to what might win the Grand National. This year the list of absentees since the weights were pub- lished is nearly as significant as those who have accepted. Master Oats had a setback in training, poor Monsieur Le Cure died at Cheltenham and last week's winner Royal Athlete has been retired. Jodami too has had a setback in a stable beset with prob- lems lately and will be aimed for the Irish National instead. That is likely to leave the game and consistent Young Hustler to carry top weight.

Two horses were long ago marked out here as being the sort to watch in prepara- tion for this year's National: Lo Stregone and Deep Bramble. At the time you could get a decent price; now, sadly, at the time of writing they are second and third favourites for the race. Paul Nicholls's nine-year-old Deep Bramble was cam- paigned last year for the Cheltenham Gold Cup, in which he ran poorly, having pulled a muscle. This season he came out later and has been aimed all along for Aintree. A dependable jumper, who has not been easy to train, he needs some cut in the ground. Connections were apparently pleased with a two-mile training spin under Tony McCoy on the course at Wincanton after racing last week.

Lo Stregone, a ten-year-old trained by Tom Tate, would meet Jenny Pitman's stipu- lation that, above all, a National horse must have guts. Last year he won the Ladbroke Gold Cup at Newbury by 20 lengths. He was third in the Scottish Grand National, wear- ing blinkers, and was never out of the first four in six runs last season. This year he took on a high-class field in the Greenalls Grand National Trial at Haydock and came again at the finish to win in bottomless ground. He won't get that at Aintree, but provided the ground has not dried up too much, he would have to be my selection.

There are others whom you cannot ignore. Rough Quest, who was really impressive winning the Racing Post Chase at Cheltenham in a bog, ran a cracking race there to finish second in the Gold Cup and he will never again be handicapped so well. Trainer Terry Casey and owner Andrew Wates were at first going to give Aintree a miss after those exertions, but they found the horse so well a week ago they changed their minds. Good though he is, I still feel that the Liverpool meeting comes too soon after Cheltenham for any horse to run a big race in both, and Rough Quest has had his training problems too.

The 9-1 for the game Young Hustler does not appeal for a horse which has failed to compete for the past two years. The talented Dextra Dove has been injured and his participation has been in doubt, though he is worth noting for the future. The huge Party Politics, whom Nick Gaselee trained to win in 1992, was runner-up to Royal Athlete last year. He pulled up behind Deep Bramble in the Haydock race on going which did not suit him and has not been out again. He is said to go best when fresh, but I find it hard to believe there will not be a cou- ple to beat him this year.

The Irish, who had such a good Chel- tenham, have not had a National winner since L'Escargot took the race back in 1975. Their shortest-priced candidate is whizz-kid Aidan O'Brien's Life of a Lord.

With her record at Aintree, nobody can ignore Jenny Pitman's National entries, and after I saw her Superior Finish storm past Greenhil Tare Away and Sibton Abbey up the Sandown hill to take the Mildmay, he certainly went into my note- book. But if you are looking for one at a nice price who could spring a surprise, then I would suggest a look at Robert Alner's Bishop's Hall. He ran an excellent race first time out for his new trainer at Sandown the other day. And though he fell at the first in the National last year in the usual pell-mell rush, he has managed a clear round over the Aintree fences in another race. So, money down time, it is 1. Lo Stregone 2. Bishop's Hall and 3. Deep Bramble for me, with Jenny Pitman's horse as the reserve in case any do not run.