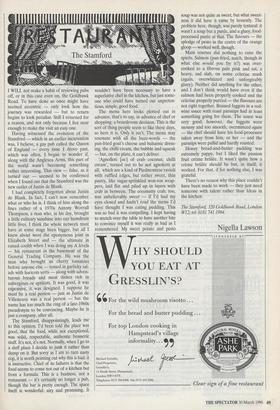 I WILL not make a habit of reviewing pubs off,

or in this case even on, the Goldhawk Road. To have done so once might have seemed eccentric — only look how the journey was rewarded — but to return begins to look peculiar. Still I returned for a reason, and not only because I live near enough to make the visit an easy one.

Having witnessed the evolution of the Stamford — which in an earlier incarnation was, I believe, a gay pub called the Queen of England — every time I drove past, which was often, I began to wonder if, along with the Anglesea Arms, this part of the world wasn't becoming something rather interesting. This view — false, as it turned out — seemed to be confirmed when I found out that the Stamford was the new outlet of Justin de Blank.

I had completely forgotten about Justin de Blank. In fact, I can't now remember what or who he is. I think of him along the lines rather of a 1970s Antony Worrall Thompson, a man who, in his day, brought a little culinary sunshine into our humdrum little lives. I think the whole network must have at some stage been bigger, but all I knew about were the eponymous joint in Elizabeth Street and — the ultimate in casual coolth when I was doing my A levels — his restaurant in the basement of the General Trading Company. He was the man who brought us cherry tomatoes before anyone else — tossed in garlicky sal- ads with haricots verts — along with adven- turous breads and meat dishes rich in aubergines or apricots. It was good, it was expensive, it was designed. I suppose he must be a real person — just as Justin de Villeneuve was a real person — but the name has too much the ring of a late-1960s pseudonym to be convincing. Maybe he is just a company, after all. The Stamford, disappointingly, leads me to this opinion. I'd been told the place was good, that the food, while not exceptional, was solid, respectable, authentic brasserie stuff. It's not, it's not. Normally, when I go to a duff place I decide to junk it rather than dump on it. But sorry as I am to turn nasty cop, it is worth pointing out why this is bad: it is instructive. Chief of its failures is that the food seems to come not out of a kitchen but from a formula. This is a business, not a restaurant — it's certainly no longer a pub, though the bar is pretty enough. The space itself is wonderful: airy and promising. It wouldn't have been necessary to have a superlative chef in the kitchen, but just some- one who could have turned out unpreten- tious, simple, good food.

The menu here looks plotted out in advance, that's to say, in advance of chef or shopping: a boardroom decision. This is the sort of thing people seem to like these days, so here it is. Only it isn't. The menu may resonate with all the buzz-words — the pan-fried goat's cheese and balsamic dress- ing, the chilli cream, the bubble and squeak — but, on the plate, it can't deliver.

`Agnolloti [sic] of crab coconut, chilli cream', turned out to be not agnolotti at all, which are a kind of Piedmontese ravioli with ruffled edges, but rather sweet, thin pastry, like sugar-sprinkled won-ton wrap- pers, laid flat and piled up in layers with crab in between. The coconutty crab, too, was unbelievably sweet — if I'd had my eyes closed and hadn't read the menu I'd have thought I was eating pudding. This was so bad it was compelling. I kept having to stretch over the table to have another bite to convince myself it was really as bad as I remembered. My sweet potato and pesto soup was not quite as sweet, but what sweet- ness it did have it came by honestly. The problem here, though, was purely textural: it wasn't a soup but a purée, and a gluey, food- processed purée at that. The flavours — the splodge of pesto in the centre of the orange gloop — worked well, though.

Main courses did nothing to raise the spirits. Salmon (pan-fried, natch, though in what else would you fry it?) was over- cooked to a fibrous pale pink and sat, a heavy, sad slab, on some celeriac mash (again, overwhizzed and unforgivably gluey). Neither did anything for the other, and I don't think would have even if the salmon had been properly cooked and the celeriac properly puréed — the flavours are not right together. Braised faggots in a red- wine sauce with roast parsnips had at least something going for them. The sauce was very good; however, the faggots were moussy and too smooth, overminced again — the chef should have his food-processor taken away from him, or her — and the parsnips were pallid and hardly roasted.

Honey bread-and-butter pudding was extremely pappy, but I liked the passion fruit crème bnilee. It wasn't quite how a crème bailee should be but, in itself, it worked. For that, if for nothing else, I was grateful.

There's no reason why this place couldn't have been made to work — they just need someone with talent rather than Ideas in the kitchen.