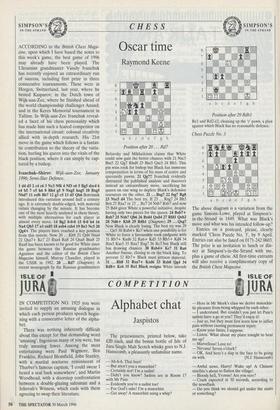 ACCORDING to the British Chess Maga- zine, upon which I have based the notes to this week's game, the best game of 1996 may already have been played. The Ukrainian grandmaster Vassily Ivanchuk has recently enjoyed an extraordinary run of success, including first prize in three consecutive tournaments. These were at Horgen, Switzerland, last year, where he bested Kasparov; in the Dutch town of Wijk-aan-Zee, where he finished ahead of the world championship challenger Anand; and in the Keres Memorial tournament in Tallinn. In Wijk-aan-Zee Ivanchuk reveal- ed a facet of his chess personality which has made him such a feared competitor on the international circuit: colossal creativity allied with in-depth research. His 21st move in the game which follows is a fantas- tic contribution to the theory of the varia- tion, hurling his queen into the vitals of the black position, where it can simply be cap- tured by a bishop.

Rd l and Rd2-c2, cleaning up the 'c' pawn, a plan against which Black has no reasonable defence.

Chess Puzzle No. 3 The above diagram is a variation from the game Simons—Lowe, played at Simpson's- in-the-Strand in 1849. What was Black's move and what was his intended follow-up?

Entries on a postcard, please, clearly marked 'Chess Puzzle No. 3', by 9 April. Entries can also be faxed on 0171-242 0603. The prize is an invitation to lunch or din- ncr at Simpson's-in-the-Strand with me, plus a game of chess. All first-time entrants will also receive a complimentary copy of the British Chess Magazine.