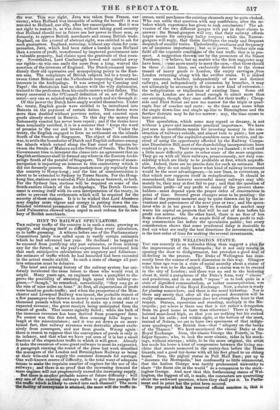 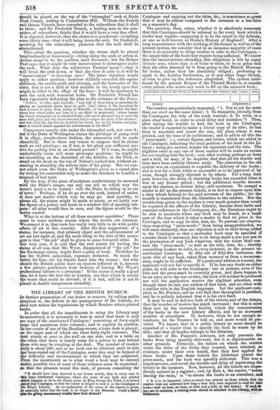 You can scarcely do an unkinder thing than iuggeat a plan for the improvement of the Metropolis ; for it not only result! jn opening the door to disfigurement, but provokes a good deaLtif ill-feeling in the process. The Duke of Wellington has inno- cently been the source of much dissension in this way. Glasgow some time ago was in a state of social anarchy about a statue Of which he was to be the subject. Then a statue was to be erected in the city of London' and there was no end to the bickering about it, until a paraphrase of the Duke's form, very "classic' and ponderous, and in so much " repose " as to look quite in a ' state of dignified somnambulism, or rather somnequitation, wax stationed in front of the Royal Exchange. Now, a statue is ready for placing somewhere, and there is the usual bickering.: Nor is there any surety that after all the proposed decoration will be really ornamental. Experience does not strengthen hope in that respect. Statues, equestrian and standing, multiply in the Me- tropolis; yet where is there one that is not rather a derogation from its good name in taste than otherwise? There is Nelson, hoisted mast-head high, so that you see nothing but his cocked hat and his cable ; and within sight, at the bottom of the mast, instead of Nelson, we are to have two specimens of that indige- nous quadruped the British lion—that "allegory on the banks of the Thames." We have mentioned the classic Duke at the Royal Exchange. Item, the classic George the FoUrth; in Tra- falgar Square ; who, to look the more classic, rides kilns stock- ings, without stirrups ; while, to be the more original, the artist has made his horse a kind of compromise between the living ma- chine that stands unmoved in the sentry-box before the Horse Guards, and a good toy-horse with all his feet glued to an oblong board. Item the pigtail statue in Pall Mall East ; put up to "decorate the Metropolis," but confessedly so little ornamental, that the hatless George was tacitly pronounced imivorthyto share "the finest site in the world" as a companion to the stock- ingless George. And now that this forthcoming statue of Wel- lington, the biggest of all, is made, the concocters are quarrelling about the awkward question, where they shall put it. In Parlia- ment and in print has the point been mooted: • The proposal which has received official unction is, that it

should be placed on the top of the "triumphal" arch at Hyde Park Corner, leading to Constitution Hill. William the Fourth and Queen Victoria have conceded to the subscribers that it shall be there; and Sir Frederick Trench, a leading man in the cbm- mittee of subscribers, thinks that it would have a very fine effect. It is objected, however, that the statue is so ponderous—weighing some thirty tons—that it will bring down the arch. Sir Frederick, speaking for the subscribers, promises that the arch shall be strengthened.

Then arises the question, whether the statue shall be placed longitudinally or transversely—riding along the arch or across it. Across seems to be the position most favoured ; but Sir Robert Peel says that it might be very inconvenient to passengers under the arch. What does the mysterious Premier mean ?—that it will break the arch down, or that ,the view di sotto in sit will be " inconvenient " to decorous eyes! The latter objection would

ly to either position : however skilfully executed the equine a omen, the saddle-girth and stirrups, and the boot-soles of the rider, that is not a field of view suitable to the lovely eyes that might be lifted to the effigy of the hero : it will be necessary to pass the arch with downcast looks. Sir Frederick Trench has been vigorously defending the plan in the columns of the Times.

"Critics,' he cries, right logically, "may talk of there being no precedent for placing an equestrian statue upon an arch: [but] where is the precedent for such a career of glory, from Assaye to Waterloo, as has distinguished the illus- trious hero whose name and fame it is our object to perpetuate, whose banner has waved triumphant in an hundred fields—who never advanced but to cover his arms with glory, and who never retreated but:to eclipse the glory of his advance'; and who, from the day that be sheathed his sword, -has by his wisdom and judg- ment in council almost equalled his achievements in the field?"

Conquerors usually ride under the triumphal arch, not over it ; yet if the Duke of Wellington claims the privilege of going over -1t in effigy, steeple-chase fashion, the concession will be made

• cheerfully. But is there any reason to suppose that he claims such an odd privilege; or, if not, is his glory any sufficient mo- tive for putting him in an absurd posture ? If it were, he might 'undoubtedly claim still more grotesque positions : he might be set straddling on the shoulders of the Achilles in the Park, or stand on his head on the top of Nelson's cocked-hat, without ex- ceeding in absurdity the serious ratio of his glory. But we can- not admit even the Duke of Wellington's glory as a sound plea ' for letting his counterfeit help to make the entrance to London a triumph of bad taste.

• By the way, if the piece of sculpture confectionery, be crowned with the Duke's image, can any one tell us which way the horse's head is to be turned : will the Duke be riding in or out of town ? Perhaps, if he do go over the arch, instead of under, it does not matter which way he may go. And possibly, to • please all, the statue might be made to rotate, as we lately saw the figure of a jockey and horse in a window full of sporting sub- jects: all sides would then be seen, and the figure would be the better roasted.

What is at the bottom of all these recurrent squabbles? There must be some uniform reason where the results are common. We suspect it is, that taste has really very little to do with public affairs of art in this country. After the first suggestion, of a statue, for instance, that primary object and the advancement of art are lost sight of, and the main thing in the idea of the mana- gers is that " the job" shall be given to some favoured artist. In this very case, it is said that the real reason for having the statue at all was, that Mr. Wyat, disappointed of "the job" for the Exchange statue, might have a piece of work. Therefore he has the 25,000/. subscribed, expenses deducted. So much the better for him—let his friends hand him the money : but why should the British public have an eyesore inflicted on it, because a few private gentlemen were desirous of forcing Mr. Wyat's professional labours to a premium? If the statue is really a good one, let it have the best site in London, not that which is nearly the worst that could be devised ; if it is bad, still let it not be placed in double conspicuous absurdity.