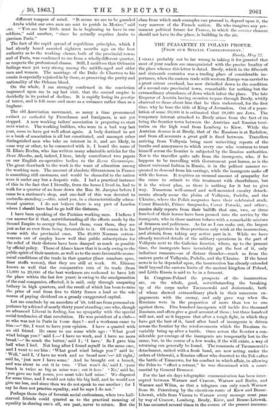 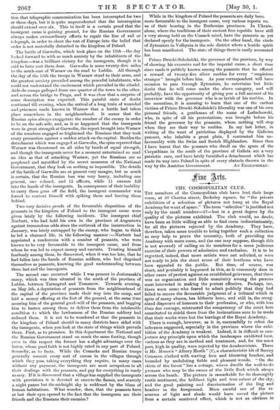 THE PEASANTRY IN POLAND PROPER. [FROM OUR SPECIAL CORRESPONDENT.] Brody,

I smut, probably not be far wrong in taking it for granted that most of your readers are unacquainted with the precise locality of the place whence this letter is dated. Brody, which in the fifteenth and sixteenth centuries was a trading place of considerable im- portance, when the eastern trade with western Europe was carried to a great extent overland, has now dwindled down to the condition of a second-rate provincial town, remarkable for nothing but the extraordinary abundance of Jews which infest the place. The late Emperor of Austria having occasion to pass through Brody, wittily observed to those about him that he then understood, for the first time, why he bore the title of King of Jerusalem. Out of a popu- lation of some 30,000 it is estimated that 28,000 are Jews. The temporary interest attached to Brody arises from the fact of its being the frontier town between the Austrian and Russian terri- tories on the high road from Lemberg to Kiew. While the Austrian douane is at Brody, that of the Russians is at Radzilow, and from all accounts a great gulf is fixed between. Travellers arriving from Volhynia bring most uninviting reports of the insults and annoyances to which every one who ventures to trust himself across the frontier is subjected by the Russian authorities. Nor is the traveller quite safe from the insurgents, who, if he happens to be travelling with Government post-horses, as is the almost universal fashion in Russia, is in the politest manner re- quested to descend from his carriage, while the insurgents make off with the horses. It requires an unusual amount of sympathy for the cause to submit to this treatment with cheerfulness, but it is the wisest plan, as there is nothing for it but to give way. Numerous well-armed and well-mounted cavalry detach- ments already scour the plains of Volhynia, Podolia, and the Ukraine, where the Polish magnates have their celebrated studs. Count Branicki, Prince Sanguscko, Count Potocki, and others, receive daily reports from their bailiffs that one, two, or three hundred of their horses have been pressed into the service by the insurgents, who in those matters behave with a remarkable mixture of firmness and politeness. As far as I can make out, the largest landed proprietors in these provinces only wink at the insurrection, and abstain from taking any active part in it. While we have already received details of the military operations in the part of Volhynia next to the Galician frontier, where, up to the present time, the insurgents have invariably got the best of it, only indistinct rumours—as of distant thunder—reach us from the eastern parts of Volhynia, Podolia, and the Ukraine. If the latest news is to be depended upon, the insurrection has already extended itself beyond the eastern limits of the ancient kingdom of Poland, and Little Russia is said to be in a ferment.

In Congress-Poland the prospects of the insurrection are, on the whole, good, notwithstanding the breaking up of the corps under Taczanowski and Jezioranski, both of whom showed extraordinary pluck in their numerous en- gagements with the enemy, and only gave way when the Russians were in the proportion of more than ten to one against them. Five hundred insurgents will tackle five thousand Russians, and often give a good account of them ; but three hundred will not, and so it happens that after a tough fight, in which they have got the best of it, band after band of insurgents is driven across the frontier by the reinforcements which the Russians in- variably bring up after a battle. Once across the frontier a con- siderable per-centage of the insurgents are temporarily lost to the cause, but, in the course of a few weeks, if the will exists, a way of returning can generally be found. The remnants of Taczanowski's detachment, united with a fresh band, are now acting under the orders of Orlowski, a Russian officer who deserted to the Pohl; after the battle of Tznaccwo, for his conduct in which affair, in allowing the Poles to "effect a retreat," he was threatened with a court- martial by General Brunner.

For the last six days telegraphic communication has been inter- rupted between Warsaw and Cracow, Warsaw and Berlin, and Warsaw and Wilna, so that a telegram can only reach Warsaw from St. Petersburg by the circuitous route of Kiew and Brzesc- Litewsk, while from Vienna to Warsaw every message must pass by way of Cracow, Lemberg, Brody, Kiew, and Brzesc-Litewsk. It has occurred several times in the course of the present insurrec- tion that telegraphic communication has been interrupted for two or three days, but it is quite unprecedented that the interruption should extend over six. This in itself is a certain proof that the insurgent cause is gaining ground, for the Russian Government always makes extraordinary efforts to repair the line of rail or telegraph, in order to cheat the rest of Europe into the belief that order is not materially disturbed in the kingdom of Poland.

The battle of Garwolin, which took place on the 13th—the day looked forward to with so much anxiety by the inhabitants of the kingdom—was a brilliant victory for the insurgents, though it is said to have cost them dear. Garwolin is some twenty-five miles to the south-east of Warsaw on the road to Lublin. All through the day of the 13th the troops in Warsaw stood to their arms, and the greatest anxiety prevailed among the peaceful inhabitants, who could not understand the excitement which prevailed in the citadel.

Aide-de-camps galloped from one quarter of the town to the other, and across the bridge to Praga, and it was clear that a surprise of some description was expected. This painful state of doubt continued till evening, when the arrival of a long train of wounded and prisoners made known in Warsaw that a battle had taken place somewhere in the neighbourhood. It seems that the Russian spies always exaggerate the number of the enemy in order to be on the safe side, and, as it so happened that the insurgents were in great strength at Garwolin, the report brought into Warsaw of the numbers engaged so frightened the Russians that they took every precaution against a sudden attack on the capital. Besides the detachment which was engaged at Garwolin, the spies reported that Warsaw was threatened on all sides by bands of equal strength, and though the insurgents never for a moment entertained so mad an idea as that of attacking Warsaw, yet the Russians are so perplexed and mystified by the secret measures of the National Government, that they look on nothing as impossible. The details of the battle of Garwolin are at present very meagre, but so much is certain, that the Russian loss was very heavy, including one general, one colonel, and 15 officers, while 11 cannon fell into the hands of the insurgents. In consequence of their inability to carry these guns off the field, the insurgent commander was forced to content himself with spiking them and leaving them behind.

Two very decisive proofs of the favourable disposition of the peasants in the kingdom of Poland to the insurgent cause were given lately by the following incidents. The insurgent chief

Narbutt, who had held his own in the province of Augustowo against tremendous odds since the outbreak of the insurrection in

January, was lately entrapped by the enemy, who began to think he led a charmed life, in the following manner :—Narbutt had appointed a rendezvous with a number of peasants, who were known to be very favourable to the insurgent cause, and from whom he was led to expect money and recruits. Trusting himself fearlessly among them, he discovered, when it was too late, that he had fallen into the hands of Russian soldiers, who had disguised themselves as peasants, knowing the good understanding between these last and the insurgents.

The second case occurred while I was present in Jezioranski's camp, which was then situated in the south of the province of Lublin, between Tarnogrod and Tomaszow. Towards evening, on May 5th, a deputation of peasants from the neighbourhood of the capital of the province made their way into the camp, and laid a money offering at the feet of the general, at the same time assuring him of the general good-will of the peasants, and begging him to hasten among them to deliver them from the intolerable condition to which the lawlessness of the Russian soldiery had reduced them. It is not to be wondered at that the peasants in the kingdom of Poland should in many districts have sided with the insurgents, when you look at the state of things which prevails there. First, as to promises. In this department the National and the Russian Government stand on much the same footing, though even in this respect the former has a slight advantage over the latter, whose good faith is not highly rated in any part of Poland.

Secondly, as to facts. While the Cossacks and Russian troops generally commit every sort of excess in the villages through which they pass, taking everything they require, in many cases without any payment, the insurgents are most scrupulous in all their dealings with the peasants, and pay for everything in ready money. Hit is discovered that a village has supplied the insurgents with provisions it is devoted at once to the flames, and scarcely a night passes but the midnight sky is reddened by the blaze of human habitations. What wonder, then, that the peasants have at last their eyes opened to the fact that the insurgents are their' friends and the Russians their enemies ? While in the kingdom of Poland the peasants are daily beco, more favourable to the insurgent cause, very various reports rem. us of their bearing in the Ruthenian provinces. In Ukrain, alone, where the traditions of their ancient free republic have still a very strong hold on the Cossack mind, have the peasants as yet declared openly for the insurgents. On the other hand, the circle of Zytomierz in Volhynia is the sole district where a hostile spirit has been manifested. The state of things there is easily accounted for.

Prince Drucki-Sokolnicki, the governor of the province, by way of showing his excessive zeal for the imperial cause, a short time since made it publicly known among the peasants that he offered a reward of twenty-five silver roubles for every "suspicious stranger" brought before him. As your correspondent will have occasion to pass through Zytomierz, he entertains but little doubt that he will come under the above category, and will probably, have the opportunity of giving you a full account of his interview with the governor who is so lavish of his roubles. In the meantime, it is amusing to learn that one of the earliest victims of Prince Drucki-Sokolnicki's liberality was one of his own personal friends, a gentleman of the name of Leduchowski, who, in spite of all his protestations, was brought before his friend the governor by the peasants, whom nothing will stop when they see their way to roubles. In my last letter, in writing of the want of patriotism displayed by the Galician peasant, who inhabits a great plain, I contrasted him un- favourably with the Swiss and Scotch Highlanders. Since then I have learnt that the peasants who dwell on the spurs of the Carpathians in the south of the province of Galicia are a very patriotic race, and have lately furnished a detachment which has made its way into Poland in spite of every obstacle thrown in the

way by the Austrian Government. AN ENGLISHMAN.