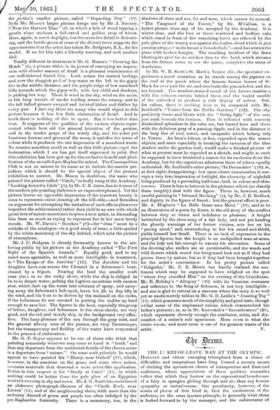 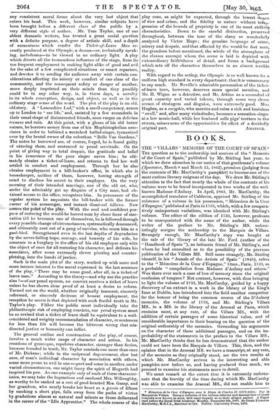 THE IJ KET-OF-LEAVE MAN AT THE OLYMPIC. HONESTY and virtue emerging triumphant from a chaos of difficulties and temptations have long formed a certain means of eliciting the uproarious cheers of transpontine and East-end audiences, whose appreciation of these qualities resembles rather that which they bestow on the supernatural beneficence of a fairy in spangles gliding through mid air, than any human sympathy or imitativeness. One peculiarity, however, of the scores of pieces of this kind is, that the excitement of the audience, on the omne ignolum principle, is generally what alone is looked forward to by the manager, and the enforcement of any consistent moral forms about the very last object that enters his head. This week, however, similar subjects have been brought before a different class of the public by a very different style of author. Mr. Tom Taylor, one of our ablest dramatic writers, has treated a great social question with a definite purpose, a degree of artistic skill, and a depth of earnestness which render the Ticket-of-Leave Man re- cently produced at the Olympic, a drama—or, technically speak- ing, melodrama—to be viewed in no ordinary light. A play which diverts all the tremendous influence of the stage, from its too frequent employment in making light alike of good and evil for the sake of a few complicated situations or smart repartees, and devotes it to sending the audience away with certain con- siderations affecting the misery or comfort of one class of the community, and the consequent safety or danger of another, more deeply imprinted on their minds than they possibly could be in any other way, is, in these days, a novelly in its whole conception, design, and object, as well as in the ordinary stage sense of the word. The plot of the play is an old, old story. A "Lancashire Lad," with a small competency, comes up to London to " see life," and, assisted by a few scoundrels in their usual shape of disinterested friends, soon verges on delirium tremens and ruin. At this point, with a gleam of his old better nature, he borrows money from one of his Mephistophelian ass°• ciates in order to befriend a wretched ballad-singer, tyrannized over by the brutal owner of the suburban "Belle Vue Gardens." The notes he borrowed are, of course, forged, he is found guilty of uttering them, and sentenced to penal servitude. On the point of giving way to total despair, the gratitude and belief in his innocence of the poor singer saves him ; he ulti- mately obtains a ticket-of-leave, and returns to find her well settled in comfort and employment. Through her he also obtains employment in a bill-broker's office, in which she is housekeeper, neither of them, however, having strength of mind to disclose his secret to their employer. On the very morning of their intended marriage, one of the old set, who, under the admirably got up disguise of a City man, had ob- tained access to the office, recognizes him. In pursuance of the regular system he acquaints the bill-broker with the former career of his messenger, and instant dismissal follows. Now comes the pointa the istay. With the cool and confident pur- pose of reducing the would-be honest man by sheer force of star- vation till he becomes one of themselves, he is followed through every possible change of circumstances, systematically denounced, and ultimately cast out of a gang of navvies, who scorn him as a gaol-bird. Strengthened even in the last depths of degradation by the never-failing hope, courage, and honesty of his wife, he consents to a burglary in the office of his old employer only with the object of once for all restoring his character, and delivers his associates, after some extremely clever plotting and counter- plotting, into the hands of justice.

Such is the main plot of the story, worked up with more and more intense interest to the moral expressed in the last sentence of the play, "There may be some good, after all, in a ticket-of leave man." According to the theory—and why not the practice also ?—of our penal system, no convict receives a ticket of leave unless he has shown clear proof of at least a desire to reform. Turned out on the world, whether originally innocent, sincerely reformed, or sincerely desirous of honest employment, the reception he meets is that depicted with such fearful truth in Mr. Taylor's play. Either the public must individually take the philanthropic risk of employing convicts, our penal system must be so revised that a ticket of leave shall be equivalent to a well- considered and weighty recommendation of character, or sentences for less than life will become the bitterest wrong that mis- directed justice or humanity can inflict.

The general outline and construction of the play, of course, involve a much wider range of character and action. In his creations of grotesque, repulsive character, stranger than fiction, because founded in truth, Mr. Taylor reminds one more than once of Mr. Dickens ; while in the reciprocal depravement, slow but sure, of man's individual character by association with others, some more prone to evil in one respect and some in another, under varied circumstances, one might fancy the spirit of Hogarth had inspired his pen. As one example only of each of these character- istics, we may take the loquacious and confused Mrs. Willoughby, as worthy to be ranked as a sort of good-hearted Mrs. Gamp, and her grandson, who nearly breaks her heart as a gamin of fifteen by smoking a short pipe, falls away from the paths of virtue by gradations almost as natural and minute as those delineated in the career of the "Idle Apprentice." The whole course of the

play runs, as might be expected, through the lowest KTIes of vice and crime, and the fidelity to nature without tre4- gression of the bounds of propriety is one of its most striking characteristics. Down to the careful distinction, preserved throughout, between the tone of the slang so wonderfully analyzed by Victor Hugo ; the genuine language of crime, misery and despair, and that affected by the would-be fast man, the grandson before mentioned, the whole of the atmosphere of the classes amongst whom the scene is laid is depicted with extraordinary faithfidness of detail, and forms a background which sets off the characters themselves in an almost terrible reality.

With regard to the acting, the Olympic is so well known for a uniform high standard in every department, that it is unnecessary to say much. Mr. Neville's admirable personation of the ticket- of-leave hero, however, deserves more special mention, and Mr. H. Wigan as a detective, and Mr. Atkins as a scoundrel of great capacity and varied talents, through some very clever scenes of stratagem and disguise, were extremely good. Miss Hughes, as a coryphee, who marries and ruins a rich and brainless " swell," and, after many vicissitudes, becomes a sensation-singer at a low music-hall, while her husband sells pigs' trotters in the streets, misses none of the opportunities for effect of a decidedly