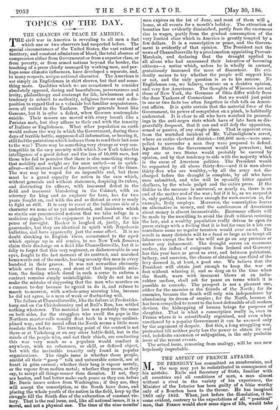 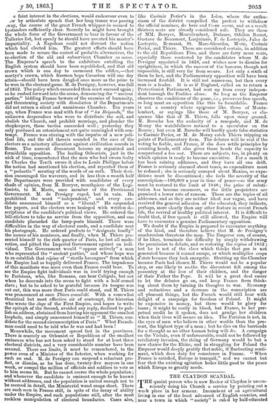 THE ASPECT OF FRENCH AFFAIRS.

AT DE PERSIGNY has committed an anachronism, and 111. • the map may yet be redistributed in consequence of his mistake. Exile and Secretary of State, familiar with all countries and all conditions of men, a man almost without a rival in the variety of his experience, the Minister of the Interior has been guilty of a betise worthy only of a Bourbon born to the throne. He has imagined 1863 only 1852. When, just before the dissolution, it be- came evident, contrary to the expectations of all "practical" men, that France would show some signs of life, would take

e faint interest in the elections, would endeavour even to

Jw by articulate speech that her long trance was passing way, the course of the great French whipper-in seemed to bystanders sufficiently clear. Secretly he might have brought the whole force of the Government to bear in favour of the Tuileries list, but openly he should have asserted his master's impartiality. A. Napoleon could not distrust the nation which had elected him. The greatest efforts should have been made to secure the easiest of probable alternatives, the re-election of the old and subservient Chamber en masse. The Emperor's speech to the exhibitors extolling the English system should have been republished, and that old crown which is one day to surmount the edifice,—that martyr's crown, which freemen hope Cmsarism will one day attain—should have been dangled once more as the prize to be won in the electoral game. M. de Persigny, however, was full of 1852. The policy which succeeded then must succeed again ; so he rushed forward into the arena, denouncing the "ancient parties," bidding France beware of the enemies of humanity, and threatening society with dissolution if the Departments did not return a silent and unanimous Chamber. Ten years ago, when France was mad with fear of " les Brigands," the unknown desperadoes who were to distribute the soil, and abolish the Church, and prohibit marriage, and plunder the shopkeepers, these tactics succeeded well ; yesterday they only produced an astonishment not quite unmingled with con- tempt. France was stirring with the impulse of a new poli- tical life, and the old threats sounded in the ears of the electors as a minatory allocution against civilization sounds in Rome. The nascent discontent became an organized and formidable opposition. The leading Orleanists, just in the nick of time, remembered that the men who had sworn fealty to Charles the Tenth swore it also to Louis Philippe before the nation had sanctioned his election, and repented them of a " pedantic " scrutiny of' the words of an oath. Their deci- sion encouraged the waverers, and in less than a month half the Departments were provided with candidates of every shade of opinion, from M. Berryer, mouthpiece of the Legi- timists, to M. Marie, once member of the Provisional Government. M. de Persigny raged, but in vain. He prohibited the word "independent," and every can- didate announced himself as a "liberal." He suspended the papers, and the electors were besieged with written de- scriptions of the candidate's political views. He ordered the bill-stickers to take no service from the opposition, and one candidate placarded the lamp-posts himself. There were difficulties in the way of electoral cards, and a candidate sent his photograph. He ordered prefects to "designate loudly" the names of his nominees, and finally, when M. Thiers pre- sented himself to the rich quarter of Paris, he lost all mode- ration, and pitted the Imperial Government against an indi- vidual. The Government would "oppose actively" a man who represented the "ancient parties," and whose hope was to re-establish that re'gime of "sterile harangues" from which the Empire had so happily delivered France. The impudence of this manifesto was more even than France could bear. To see the Empire fight individuals was in itself trying enough to Parisians, who, like Romans, can bear Caligula, but not when he descends into the arena to fight with a half-armed slave ; but to be asked to be grateful because its tongue was cut out, this was more than Paris could stand, and M. Thiers was pronounced at once Thiers console& With a somewhat theatrical but most effective air of contempt, the historian who wrote the Jive of the First Empire, and hopes to write the epitaph of the Second, avoided any reply, declined to pub- lish an address, abstained from leaving his opponent the smallest loophole, and simply announced himself as "It!. Thiers, can- didate for the second circumscription of Paris." What French- man could need to be told who he was and had been

Meanwhile, the movement spread fast in the provinces. There is scarcely an Orleanist or Republican of the smallest eminence who has not been asked to stand for at least three electoral districts, and a very considerable number have been secured. There are limits, it must be remembered, to the power even of a Minister of the Interior, when working for such an end. M. de Persigny can suspend a reluctant pre- fect, or dismiss, as he has done, twenty-five mayors in one week, or compel the million of officials and soldiers to vote as to him seems fit. But he cannot coerce the whole population ; and whenever the candidate is eminent enough to be known without addresses, and the population is united enough not to be coerced in detail, the Ministerial wand snaps short. There are such men in France still, in spite of the decay of ability under the Empire, and such populations still, after the most reckless manipulation of electoral boundaries. Cases also,

like Casimir Perier's in the Isere, where the enthu- siasm of the district compelled the prefect to withdraw the official nominee, do here and there occur, and as a result thirteen seats are already considered safe. They are those of MM. Berryer, Montalembert, Dufaure, Odillon Banot, Gustave de Beaumont, Lanjuinais, F. de Lasteyrie, Jules de Lasteyrie, Remusat, St. Marc-Girardin, Morie, Casimir Perier, and Thiers. These are considered certain, in addition to the old Republican Five, and there are forty more seats, especially those contested by the candidates whom M. de Persigny appointed in 1858, and wishes now to dismiss for uprightness, in which the succesS'of the bureaus, though not impossible, is still very far from secure. Let only a sixth of them be lost, and the Parliamentary opposition will have been increased fivefold. It is still not numerous, but then every man is a leader. It is as if England, called on to return a Protectionist Parliament, had sent up from every indepen- dent borough the Peelites alone. So long as the Emperor observes the conditions of the game, i.e., preserves free speech, so long must an opposition like this be formidable. France is not a country where epigrams like those of Monte- lembert, or sayings like those of M. Berryer, or elo- quence like that of M. niers, falls upon stony ground. M. Baroche has the audacity of a renegade, and M. de Morny the watchfulness natural to a speculator on the Bourse ; but even M. Baroche will hardly quote false statistics to Casimir Pelier, or M. de Morny catch Thiers tripping on points of Parliamentary form. The debates will be real if the voting be feeble, and France, if she does settle principles by counting heads, still also gives those heads the capacity to comprehend a bon mot. There are subjects, too, in plenty on which opinion is ready to become executive. For a mouth it has been raining addresses, and they have all one drift. France is seriously alarmed about taxes, so expenditure must be reduced ; she is seriously annoyed about Mexico, so expe- ditions must be discontinued ; she feels the severity of the conscription-100,000 a year in time of peace—so the army must be restored to the limit of 1848; the price of substi- tution has become enormous, so the little proprietors are promised a lower rate of ransom. These are the topics of all addresses, and as they are neither ideal nor vague, and have received the general adhesion of the educated, they indicate, perhaps, more clearly than any other feature in recent French life, the revival of healthy political interest. It is difficult to doubt that, if free speech is still allowed, the Empire will have to encounter a genuine Parliamentary opposition. We doubt if the Empire is prepared to encounter anything of the kind, and therefore believe that M. de Persigny's anachronism threatens the map. The Emperor can, of course, if he likes, terminate the difficulty by simply withdrawing the permission to debate, and so restoring the regime of 1852; but he is not of the class which thinks that gas is not generated because it cannot escape, or which multiplies coups d'etats because they look energetic. Shutting up the Chamber because Paris had chosen M. Thiers would not be a popular step, or one likely to soothe the discontent felt among the peasantry at the loss of their children, and the danger of their Father the Pope. It will be a great deal easier to let the debates go on, and keep France from think- ing about them by turning its thoughts to war. Economy and reductions and a decrease in the conscription are all pleasant things, but the French would still hear with delight of a campaign for freedom of Poland. It might be expensive in money, but there would be glory for loans ; it might be costly in blood, but France, to her per- petual credit be it spoken, does not grudge her children when their lives will secure an idea. The Parisian is not, in. the eyes of men who believe in other worlds than the pre- sent, the highest type of a man ; but he dies on the barricade for a thought as no other human being will do. A campaign on the Vistula, even if unfavourable, could not be followed by retaliatory invasion, the rising of Germany would be but a new chance for the Rhine, and in struggling for Poland the Emperor would deeply gratify that noble, if fluctuating senti- ment, which does duty for conscience in France. "When France is satisfied, Europe is tranquil," and we cannot but fear that the existing agitation bodes little good to the peace which Europe so greatly needs.