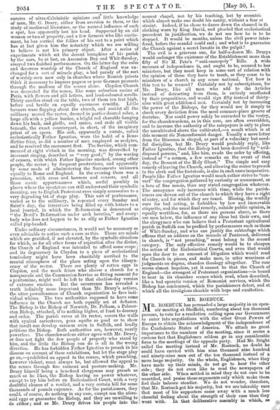 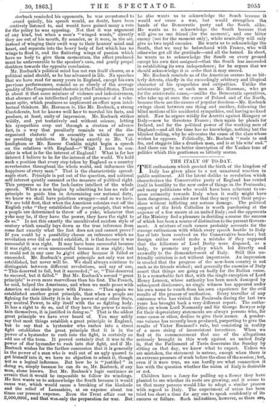 an open- air meeting at Sheffield, numbering about ten thousand persons, to vote for a resolution calling upon our Government to enter into negotiations with the other Great Powers of Europe to obtain the acknowledgment of the independence of the Confederate States of America. We attach no great importance to the numbers of the meeting, since it seems a curious fact that Englishmen seldom go in any considerable force to the meetings of the opposite party. Had Mr. Bright called the meeting instead of Mr. Roebuck, no doubt he could have carried with him nine thousand nine hundred and ninety-nine men out of the ten thousand instead of a mere large majority. On the whole, Englishmen, when they have made up their minds, do not go to hear the other side ; they do not even like to read the newspapers of the other side. When settled in mind they do not care to be unsettled, and praise those arguments only which make them feel their balance steadier. We do not wonder, therefore, that Mr. Roebuck got his majority, but we are tolerably sure that most of his supporters came away with a much less cheerful feeling about the strength of their case than they went with. In that deliberative assembly in which, as ctoebuck reminded his opponents, he was accustomed to aeard quietly, his speech would, no doubt, have been centively listened to, and would have gained many a vote for the policy he was opposing. Not that it was argument of any kind, but when a man's "winged words," directly they are out of his mouth, fly asunder, as it were, in the air, instead of winging their swift way to their hearers' mind and heart, and separate into the heavy body of fact which has no wings to float it, and the fluttering wings of passion which have no body to give them momentum, the effect produced must be unfavourable to the speaker's case, and gently propel doubters towards the opposite conclusion.

Mr. Roebuck's political mind has not run itself clearer, as a political mind should, as he has advanced in life. No speeches that we have read for many years in England, except his own previous performances, remind us so closely of the average quality of the Congressional rhetoric in thel7nited States. There is about it that same mixture of violence and indecisiveness, that absence of an intellectual policy and presence of a vehe- ment spite, which produces so unpleasant an effect upon intel- lectual thinkers. Mr. Horsman is, like Mr. Roebuck, a strong Confederate, but he knows well how to marshal his facts, and produce, at least, unity of impression. Mr. Roebuck strikes wildly, and yet tentatively and without science, letting his sympathies crop out through a stratum of adverse fact, in a way that peculiarly reminds us of the dis- .organized rhetoric of an assembly in which there are -no presiding intellects. He begins exactly as Mr. Val- landigham or Mr. Roscoe Conklin might begin a speech on the relations with England—" What I have to con- -slider is what is for the interest of England ? What is for her interest I believe to be for the interest of the world. We hold each a position that every step taken by England as a country .reverberates throughout the whole world, and influences the happiness of every man." That is the characteristic spread- -eagle start. Principle is put out of the question, and national -self-interest quietly assumed as the measure of political right. 'This prepares us for the lack-lustre intellect of the whole speech. When a man begins by admitting he has no rule of principle to guide him in determining our national duty, 'we know we shall have pointless swagger—and so we have. We are told first, that when the American colonies cast off the English yoke " they established the great principle, that when a people are determined to throw off a yoke; whatever that yoke may be, if they have the power, they have the right to do so." Is not this exactly the uncultivated random style of 'oratory which usually lays down as the true inference from some fact exactly what the fact does not and cannot prove? If you could by a possibility choose an inference which no revolution ever did or could establish, it is that because it was -successful it was right. It may have been successful because it was right, or even unsuccessful because it was right ; but it could not in any case be sight either because it failed or succeeded. Mr. Roebuck's great principle not only was not .established, but never will be. We shall always continue to distinguish between different revolutions, and say of one, ." This deserved to fail, but it succeeded;" or, "This deserved to succeed, but it failed." But Mr. Roebuck's second "great principle" is even more marvellous than his first. The French, he said, helped the Americans, and when we made peace with America we also made peace with France. "Then again we established another great principle, that when a people are fighting for their liberty it is in the power of any other State, any neutral Power, to ally itself with the so fighting body. It has a right to do so, and if they have the power to main- tain themselves, it is justified in doing so." That is the oddest great principle we have ever heard of. You may safely say that most things establish a great principle in England, but to say that a bystander who rushes into a street fight establishes the great principle that it is in the Tower of a bystander to rush into the fight, is certainly an odd use of the term. It proved certainly that it was in the power of that bystander to rush into that fight, and if Mr. Roebuck wishes for the further concession that it is generally in the power of a man who is well out of an ugly quarrel to get himself into it, we have no objection to admit it, though not as a logical inference. But how he is " justified " in 'doing so, simply because he can do so, Mr. Roebuck, if any man,. alone knows. But Mr. Roebuck's logic continues so erratic that it would be impossible to follow its windings. He first wants us to acknowledge the South because it would cause war, which would cause a breaking of the blockade and the relief of Lancashire, at an expense about ten times our present expense. Even the Trent affair cost us 2,000,0001., and that was.only the preparation for war. But he also wants us to acknowledge the South because it would not cause a war, but would strengthen thq hands of the Democratic party and the South.

He wants us to acknowledge the South because that will give us one friend (for the moment), and one bitter enemy (not for the moment only), while neutrality will only give us two tepid enemies. He wants us to acknowledge the South, that we may be beforehand with France, who will otherwise get all the gratitude—and all the hatred. In short, he wants us to acknowledge the South on every ground except his own first assigned—that the South has succeeded. in establishing its own independence; for he argues that we should acknowledge it in order that it may succed. Mr. Roebuck reminds us of the American orators he so bit- terly detests, chiefly in the exceedingly arbitrary and illogical character of his sympathies and antipathies. Unlike the aristocratic party, or such men as Mr. Horsman, who go for the aristocratic cause,—unlike the Democratic operatives, who take up at once the cause of Poland and of the North, because these are the causes of popular freedom—Mr. Roebuck swings about between one thing and another, followino.e the blind motions of his accidental sympathies, and having no fixed mind. Now he argues wildly for Austria against Hungary or Italy—now he threatens France ; then again he pleads for Ireland, and for the political power of the working men of England—and all the time has no knowledge nothing but the blindest feeling, why he advocates the cause of the class whose wishes he opposes. Politically, Mr. Roebuck "reels to and fro and staggers like a drunken man, and is at his wits' end." And there can be no better description of the Yankee tone of politics which this gentleman so bitterly scorns.