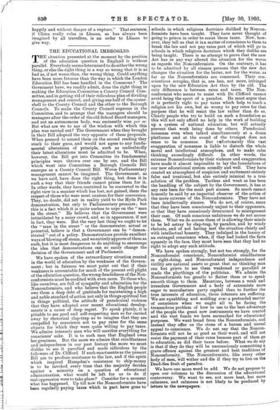 THE situation presented at the moment by the position of the education question in England is without parallel. Everybody seems determined to do eitherthe wrong thing, or else the right thing in a way so wrong that it is as bad as, if not worse than, the wrong thing. Could anything have been more fatuous than the way in which the London Education Bill has been handled in the Commons ? The Goverment have, we readily admit, done the right thing in making the Education Committee a County Council Com- mittee, and in getting rid of their ridiculous plan of dividing management and control, and giving one half of the oyster- shell to the County Council and the other to the Borough Councils. To make the County Council supreme in the Committee, and to arrange that the managers should be managers after the order of the old School Board managers, and not an autonomous body, was eminently wise per se. But what are we to say of the wisdom with which this plan was carried out? The Government when they brought in their Bill adopted the very opposite of these proposals. When pressed to amend them on the second reading they stuck to their guns, and would not agree to any funda- mental alterations of principle, such as undoubtedly their latest alterations must be admitted to be. When, however, the Bill got into Committee its fundamental principles were thrown over one by one, and the Bill which went into Committee a Borough Councils Bill emerges as a County Council Bill. Worse Parliamentary management cannot be imagined. The Government, as we have said, have done the right thing, but done it in such a way that their friends cannot praise them for it. In other words, they have contrived to be converted to the right view in a manner which has lost, not gained, them the respect of those who were most anxious for their conversion. They, no doubt, did not in reality yield to the Hyde Park demonstration, but only to Parliamentary pressure ; but this is a fact which it is quite useless to urge on the " man in the street." He believes that the Government were intimidated by a noisy crowd, and so in appearance, if not in fact, they were. But the very last thing we ought to let the " man in the street " or the demonstrator, actual or potential, believe is that a Government can be " demon- strated " out of a policy. Demonstrations provide excellent ways of blowing off steam, and weentirely approve of them as such, but it is most dangerous to do anything to encourage the idea that demonstrations can so easily change the decision of the Government and of Parliament.

We have spoken of the extraordinary situation created in the world of education by the weakness of the Govern- ment ; but in fairness we must point out that if their weakness is accountable for much of the present evil plight of the education question, the wrong-headedness of the Non- conformists must be credited with even more. To those who, like ourselves, are full of sympathy and admiration for the Nonconformists, and who believe that the English people owe them a deep debt of gratitude for maintaining a high and noble standard of action not only in things spiritual but in things political, the attitude of paradoxical violence that they have adopted over recent educational develop- ments is a cause of deep regret. To speak plainly, it is pitiable to see good and self-respecting men so far carried away by rhetorical clap-trap as to imagine that they are compelled by conscience not to pay rates for the same objects for which they were quite willing to pay taxes. We admire intensely men who will sacrifice everything for conscience' sake. It is to such men that England owes her greatness. But the more we admire that steadfastness and independence in our past history the more we must dislike to see it parodied and made ridiculous by the followers of Dr. Clifford. If such enactments as the present Bill are to produce resistance to the law, and if the spirit which inspired Hampden's resistance to ship-money is to be invoked every time that the majority decides against a minority on a question of educational administration, what would be left for us to do if real oppression were to take place ? Consider for a moment what has happened. Up till now the Nonconformists have been regularly paying taxes which in part have gone to schools in which religious doctrines disliked by Noncon- formists have been taught. They have never thought of going to prison in order to resist those taxes. Now, how- ever, they tell us that it is a matter of conscience to them to break the law and not pay rates part of which will go to schools in which religious doctrines which they dislike are being taught. There is no attempt to prove that the new Act has in any way altered the situation for the worse as regards the Nonconformists. On the contrary, it has to be admitted by all sincere persons that the new Act changes the situation for the better, not for the worse, as far as the Nonconformists are concerned. Their con- scientious scruples, that is, are less, not more, infringed upon by the new Education Act than by the old. The only difference is between rates and taxes. The Non- conformist who means to resist with Dr. Clifford cannot avoid being the sport of a paradox. He must argue that it is perfectly right to pay taxes which help to teach a religion not his own, but so wrong to pay rates for that purpose that he will resist the law rather than do so. Clearly people who try to build on such a foundation as this will not only afford no help in the Work of building up a system of national education, but will actually prevent that work being done by others. Paradoxical nonsense even when talked simultaneously at a dozen platforms and at the sound of the trumpet does not cease to be nonsense. But unfortunately this vast exaggeration of nonsense is liable to disturb the whole moral and intellectual atmosphere, and to make calm thinking exceedingly difficult. In other words, the extreme Nonconformists by their violence and exaggeration have made it almost impossible to lay the foundations of our new educational system soundly and well. They have created an atmosphere of suspicion and excitement entirely false and irrational, but also entirely inimical to a true solution of the problem. Tactless and weak as has been the handling of the subject by the Government, it has at any rate been for the most part sincere. So much cannot honestly be said by an impartial observer of the action of the more extreme of the Nonconformists. They have not been intellectually sincere. We do not, of course, mean that they have been consciously unjust to their opponents, or that they have consciously determined to misrepresent their case. Of such conscious unfairness we do not accuse them. What we do accuse them of is allowing their minds to be led astray by clap-trap, by paradox, and by windy rhetoric, and of not having met the situation clearly and with intellectual honesty. They indulged in the luxury of an outraged conscience when, if they had looked the facts squarely in the face, they must have seen that they had no right to adopt any such attitude.

We have spoken strongly, but not too strongly, for the Nonconformist conscience, Nonconformist steadfastness in right-doing, and Nonconformist independence and virility are national assets so great that no thinking man can but grieve to see them weakened or parodied or made the playthings of the politician. We admire the Nonconformists too greatly to flatter them or to speak smooth things to them. Meantime, between a weak and irresolute Government and a body of extremists more eager to manufacture party capital than to further the true interests of education, those interests are suffering. We are squabbling and scolding over a pretended matter of conscience when we ought all to be facing the tremendous problem of how to use to the best advantage of the people the great new instruments we have created and the vast funds we have earmarked for educational purposes. We want bread from the Nonconformists, and instead they offer us the stone of a barren and unreal appeal to conscience. We do not say that the Noncon- formists will not be as good as their word, and will not resist the payment of their rates because part of them go to education, as did their taxes before. What we do say is that if they do they will be unconsciously committing a grave offence against the greatest and best traditions of Nonconformity. The Nonconformists, like every other body of men, will wither and die if they try to live on the Dead-Sea fruit of paradox.

We have one more word to add. We do not propose to open our columns to the discussion of the educational controversy. We want to see, not more heat, but more calmness, and calmness is not likely to be produced by letters to the newspapers. .