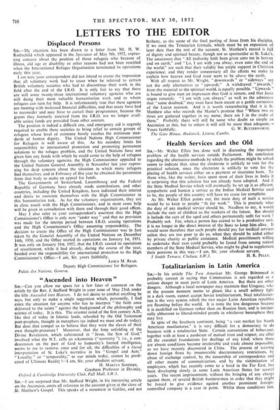 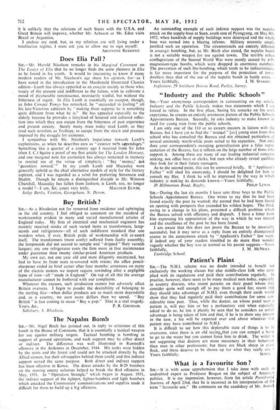 Sia,—In his article The Two Americas Mr. George Brinsmead is probably correct in saying that Communism is not regarded as a serious danger in most parts of Latin America. But there are other dangers. Although a local newspaper may maintain that Uruguay, who at the -present moment seems to gleam like a small solitary light in a dark room, cannot accept Soviet totalitarianism, Nazi totalitarian- ism is the very system which the two major Latin American republics are flaunting bekre the world. It is none the less dangerous because it is modelled on German rather than on Russian lines, and is intrinsi- cally abhorrent to liberal-minded people in whichever hemisphere they may live.

In spite of the Southern continent, being " a vast market for North American manfactures," it is very difficult for a democracy to do business with a totalitarian State. Certain conventions of behaviour, together with at least a modicum of mutual trust and respect, are after all the essential foundations for dealings of any kind; where these are absent conditions become intolerable and trade almost impossible, as we have recently discovered in China. The process of wearing down foreign firms by innumerable discriminatory restrictions, by abuse of exchange control, by the censorship of correspondence and all other means of communication, and by the victimisation of employees, which- has recently come to a head in the Far East, has been developing slowly in some Latin American States for several years. The recent imprisonment, without the bringing of any charge against them, of several British business-men in order that they might be forced to give evidence against another prominent foreign- controlled company is a case in point. Whilst these conditions last, it is unlikely that the relations of such States with the U.S.A. and Great Britain will improve, whether Mr. Acheson or Mr. Eden visits Brazil or Argentina.

I enclose my card, but, as my relatives are still living under a totalitarian regime, I must ask you to allow me to sign myself: