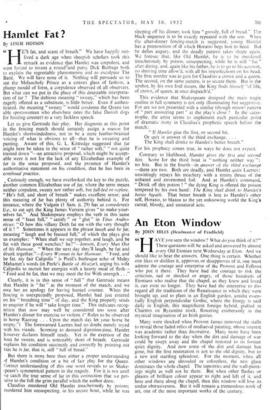 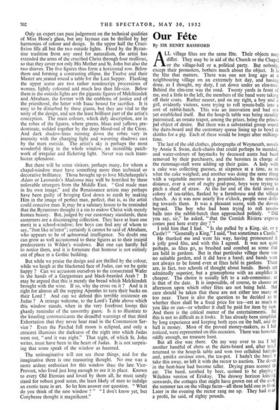 By JOHN HILLS (Headmaster of Eradficld)

AVE you seen the window? What do you think of it?" These questions will be asked and answered by almost every Old Etonian next Wednesday at Eton. And we should like to hear the answers. One thing is certain. Whether one likes or dislikes it, approves or disapproves of it, one must admire the courage and enterprise of the Provost and Fellows who put it there. They have had the courage to risk the criticism, sad or shocked or angry, of those hundreds of Etonians who realise that the chapel, as they knew and loved it, can exist no longer. They have had the enterprise to dis- regard all the traditions of the Renaissance in which they were brought up, and to plant in an English garden, amidst essen- tially English perpendicular Gothic, where the liturgy is said daily in English, this magnificent foreign hybrid, grafted in Chartres on Byzantine stock, flowering exuberantly in the mystical imagination of an Irish genius.

Many were shocked when Provost James removed the stalls to reveal those faded relics of mediaeval painting, whose interest was academic rather than decorative. Many more have been looking forward to the day when the dirt and damage of war could be swept away and the chapel restored to its former quiet dignity. And now some of the dirt and damage has gone, but the first restoration is not to the old dignity, but to a new and startling splendour. For the moment, when all other windows are shrouded or colourless, the new glass dominates the whole chapel. The tapestries and the wall-paint- ings might as well not be there. But when other flashes or gleams of brilliant colour appear to right and left of it, and here and there along the chapel, then this window will lose its undue obtrusiveness. But it will remain a tremendous work of art, one of the most important works of the century. Only an expert can pass judgement on the technical qualities of Miss Hone's glass, but any layman can be thrilled by her harmonies of colour and design. In the upper half the Cruci- fixion fills all but the two outside lights. Freed by the Byzan- tine tradition from any need for naturalism, the artist has extended the arms of the crucified Christ through four mullions, so that they cover not only His Mother and St. John but also the two thieves. The five figures thus form a horizontal row. Below them and forming a contrasting ellipse, le Twelve and their Master are seated round a table for the Last Supper. Flanking the upper scene are two rather nondescript processions of women, lightly coloured and much less than life-size. Below them in the outside lights are the gigantic figures of Melchizedek and Abraham, the former with the emblems of justice and of the priesthood, the latter with Isaac bound for sacrifice. It is easy to be disturbed by these giants, but they are vital to the unity of the design, and not the least brilliant part-of the artist's conception. The main colours, which defy description, are in the robes of the figures. where greens, blues and yellows pre- dominate, welded together by the deep blood-red of the Cross. And dark shadow-lines running down the robes vary in intensity with the changing light and_wavering shadows cast by the trees outside. The artist's sky is perhaps the most wonderful thing in the whole window, an incredible patch- work of irregular and flickering light. Never was such trans- lucent splendour.

But there will be some visitors, perhaps many, for whom a chapel-window must have something more than technical or decorative brilliance. Those brought up to love Michelangelo's Adam or Leonardo's Madonna may ,well be horrified by these unlovable strangers from the Middle East. " God made man in his own image," and the Renaissance artists may perhaps have been guilty of bringing God down to earth by making Him in the image of perfect man, perfect, that is, as the artist could conceive man. It be a salutary lesson to be reminded that the Byzantines thought it a sin to endow Christ with merely human beauty. But, judged by our customary standards, these easterners are a discouraging collection. They have at least one merit in a school-window; few boys can find any of whom to say,- "Just like m'tutor"; certainly it cannot be said of Abraham, who appears to be of subnormal intelligence. No doubt one can grow as well accustomed to these figures as to their insipid predecessors in Wilder's windows. -But one can hardly fail to notice them, and it is fortunate that humour is not entirely out of place in a Gothic building.

But while we praise the design and are thrilled by the colour, while we laugh at the blackened face of Judas, can we be quite happy ? Can we accustom ourselves to the consecrated Wafer in the hands of a Gargantuan and black-bearded Arab ? It may be argued that this is merely the bread which Melchizedek brought with the wine. If so, why the cross on it ? And is it right for almost all the supping Apostles to turn their backs on their Lord ? And can we defend this terrible insistence on Judas ? A strange welcome, to the Lord's Table above which this window stands, when in the very forefront loonis this ghastly reminder of the unworthy guest. Is it -to illustrate to the kneeling communicants the dreadful warnings of that third Exhortation that they never hear read in the Communion Ser- vice ? Even the Paschal full moon is eclipsed, and only a crescent illumines the darkness of the night into which Judas went out, " and it was night." That night, of which St. John writes, must have been in the heart of Judas. It is not surpris- ing that some speak of the window as haunted.

The unimaginative will not see these things, and for the imaginative there is one reassuring thought. No one was a more ardent enthusiast for this window than the late Vice- Provost, who lived just long enough to see it in place. Known to every Old Etonian and loved by them all, he must surely stand for robust good sense, the least likely of men to indulge an exotic taste in art. So let him answer our question. " What do you think of the new window ? " " I don't know yet, but Conybeare thought it magnificent."